Iowa looks to return to its winning ways as it hosts Indiana at 8 p.m. tonight. 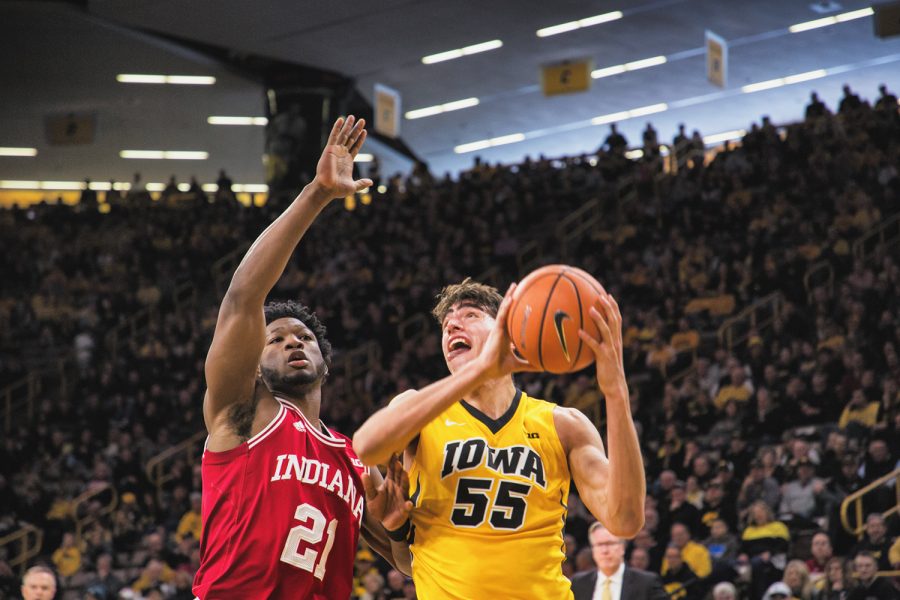 Iowa forward Luka Garza controls the ball during a game against Indiana University at Carver-Hawkeye Arena on Saturday, Feb. 17, 2018. The Hoosiers defeated the Hawkeyes 84 to 82.

For the first time in three games, No. 21 Iowa’s attempted game-winner didn’t fall.

Jordan Bohannon’s 3-pointer with Maryland’s Anthony Cowen draped on him hit the rim, and Isaiah Moss’ put-back jumper failed to hit the bottom of the net.

“That’s what this league is, and that’s what typically happens the second part of the conference schedule. Every game has been like that, even the ones we’ve won,” Iowa head coach Fran McCaffery said. “… Sometimes, there are games like that, but the rest of them, think about our Northwestern game on the road, our Penn State game on the road — they were absolute wars, and that’s what this league is.”

From top to bottom, the Big Ten is arguably the most competitive conference in the country. As McCaffery said, each game is a battle, and the Hawkeyes aren’t taking any opponents lightly. Only 3.5 games separate the Big Ten’s top six programs in the standings, and a win against Indiana tonight would give the Hawkeyes — who are already in a prime position — a boost.

During the past four games, Garza scored 16 points, shooting 4-for-25 (16 percent). The sophomore, a usually-reliable 3-point shooter, had made just one of his eight attempts during that span.

McCaffery said during a press conference on Thursday that he’s been encouraging the Washington native to keep shooting.

“Stay positive with him,” McCaffery said. “… Nobody is more committed than he is.”

Prior to Iowa’s win over Indiana on Feb. 7, Garza had scored at least 19 points in five-straight games, and the Hawkeyes are 11-3 when he scores at least 12 points.

Despite Garza’s struggles, the last four Iowa games have gone down to the wire — the Hawkeyes outscored their opponents by just 7 points during that span — and there’s reason to believe tonight’s contest will follow suit.

In the previous matchup between Iowa and Indiana, Jordan Bohannon’s clutch shooting sparked down the stretch. The junior guard hit a pair of 3-pointers, including a fadeaway triple well beyond the arc with 43 seconds left in the game, in route to a 25-point performance. He also dished 6 assists and did not commit a turnover.

Since then, the Hoosiers have played three games and lost all of them — to Ohio State by 3 points, Minnesota by 21, and then to Purdue on Tuesday in a low-scoring, 48-46 affair.

“They keep coming. They’ve got some young guys that keep getting better,” McCaffery said. “You sort of expect it from Romeo, but you forget how young he is. He’s been tremendous coming down the stretch in games. Morgan has been great and so have a lot of their other guys. We know what that team is, and we just experienced it three games ago.”

Including tonight’s game against Indiana, four out of the five remaining games on Iowa’s schedule have teams with worse records (Wisconsin is the lone remaining team with a record better than Iowa’s). For Iowa to move up in the rankings, it needs to take care of business, especially at home against a feisty team struggling to stay afloat above .500.

An all-around team performance — including help from Garza — would certainly help in that case.