The Hawkeyes will prepare for the Cowboys just like any other dual meet - like it’s the most important one. 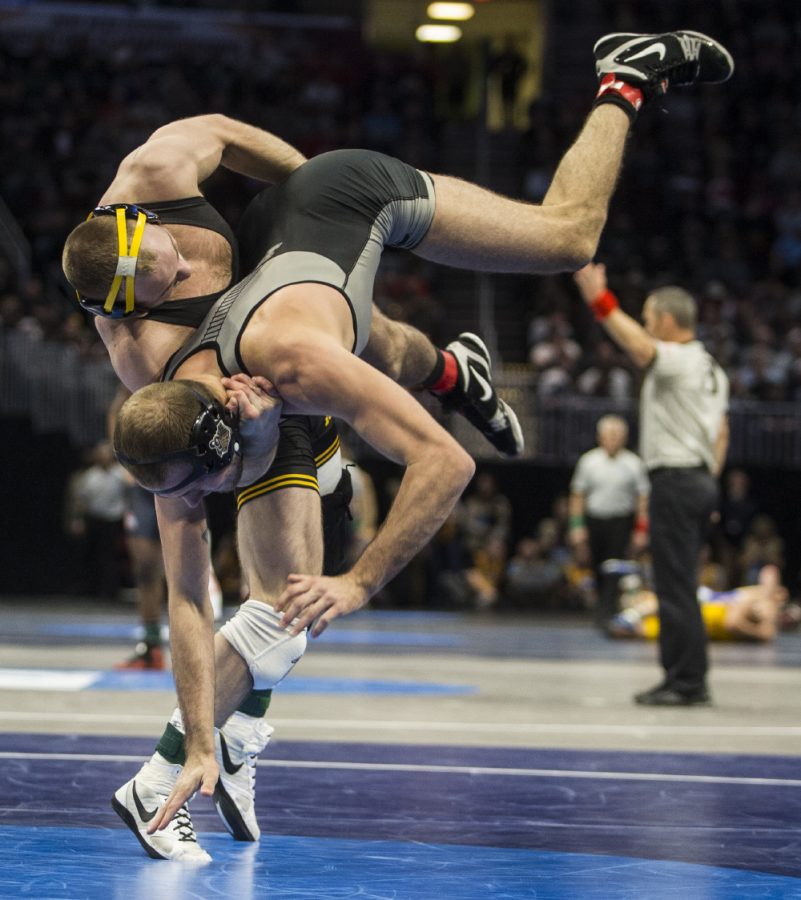 Iowa's 165-pound Alex Marinelli takes down Purdue's Jacob Morrissey during Session 1 of the NCAA Division 1 Wrestling Championships at Quicken Loans Arena in Cleveland, Ohio on Thursday, March 15, 2018. Marinelli went on to defeat Morrissey by fall in 6:20. Iowa leads the tournament with 18.5 team points at the end of Session 1.

Nine of 10 matchups in Iowa’s last dual meet of the season will have at least one top-10 wrestler on the mat, and the 10th match will be between two top-16 opponents at 141.

Needless to say, Feb. 24 will be the Iowa’s toughest showdown of the year as it travels to Gallagher-Iba Arena in Stillwater to face the No. 2 Cowboys.

Depsite this being against the highest ranked team they’ve faced all season, the Hawkeyes will get ready to go just like they do for any other match, the only difference being their opponents have the same goal as them — become a real contender.

One of those horses who has been consistent all season is All-American and Midlands Champion Alex Marinelli.

“I went my freshman year to Oklahoma State, and it was very fun; I didn’t get to wrestle, but it was a very good environment,” Marinelli said. “I love that kind of stuff, and I know my teammates do, too. We’ve got a team that doesn’t crumble under the bright lights and the crazy crowd. We’ve got teammates that are ready for the fight.”

Although nearly any matchup this week could be considered a headlining bout, the likely first two of the night will get the excitement started. At 125, No. 2 Spencer Lee will take on undefeated No. 4 Nick Piccininni, and No. 3 Austin DeSanto will go for his third upset of the season against No. 2 Daton Fix.

Two other top-10 matchups come at the end of the probable lineup, where No. 4 Jacob Warner will likely wrestle No. 6 Jacobe Smith and No. 8 Sam Stolll will get his shot at No. 2 Derek White.

When wrestling at Oklahoma State, the Hawkeyes are 7-14-2. However, the Hawkeyes have won four of the last five matchups against the Cowboys, including last season’s 20-12 win in Carver-Hawkeye.

Whether the Hawkeyes win or not, the meet will sure be one to watch as more talent will be shown than any other dual this season, as 18 ranked wrestlers will compete under one roof.

“I know that our guys are competitive,” Brands said. “They all want to be on the mat with the best guys in the country and in the world. This is an opportunity. We’ve got two programs going after the same real estate.”