Democratic candidate Tulsi Gabbard spoke to a crowd at The Mill on Thursday, once again calling for an end to regime change wars and prison reform. 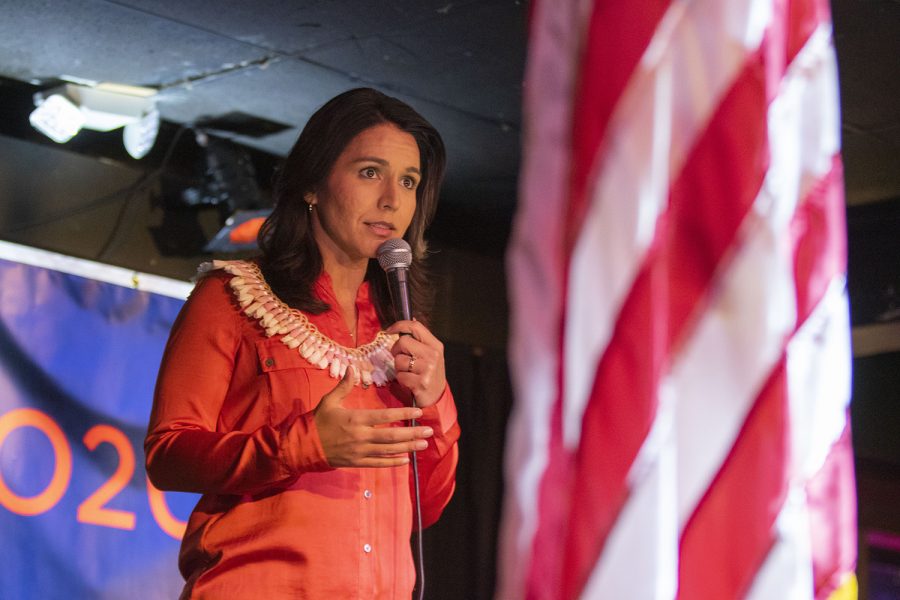 U.S. Rep. Tulsi Gabbard, D-Hawaii, speaks during an event at the The Mill on Thursday, February 21, 2019. Rep. Gabbard visited Iowa City on Thursday after having cancelled stops in the area last week due to inclement weather.

In her second appearance in Iowa City in 10 days, Democratic presidential candidate Tulsi Gabbard spoke to an energetic crowd at The Mill on Thursday night.

The Democratic representative from Hawaii’s 2nd Congressional District once again delivered a message focused on uniting the country, before moving on to speak on her signature issue, ending “regime change wars,” describing when the United States intervenes abroad to change countries’ leadership.

“As we work to bend the arc of history away from war and toward peace, we have the power to make this happen,” Gabbard said.

“All of these things can happen,” Gabbard said. “We know that these are achievable goals. In order to do so, we must make sure our taxpayer dollars are staying here.”

Gabbard has been criticized for her anti-intervention views in the past, most recently by Meghan McCain when she appeared on *The View* on Feb. 20. McCain accused Gabbard of being an “Assad apologist,” referring to the Syrian president, Bashar Al-Assad who has been accused of being behind a chemical weapons attack in Syria, and promoting Syrian propaganda.

Gabbard has condemned US involvement in Syria, and received criticism over a meeting with Al-Assad while on a trip to Syria in 2017. Gabbard addressed the controversy with reporters.

“I have not made any supportive comments of any brutal dictators anywhere in the world,” Gabbard told reporters. “The reason I went to Syria is because I’m committed to peace.”

In her Iowa City event, Gabbard named climate change as one of her most important issues. However, she has expressed concerns over the “Green New Deal,” and she raised some questions with the specifics of the resolution when responding to a question from the audience.

“The language is very vague in some areas,” Gabbard said. “And it leaves out some critical things, like nuclear power and fracking, both of which I’m opposed to.”

Gabbard called for an end to the federal prohibition on marijuana, to raucous applause from the audience. Gabbard co-sponsored a 2017 bill that would decriminalize marijuana and remove it from the list of controlled substances.

“Stop throwing people in prison for smoking a joint, and instead go after those like Purdue Pharma, who are proliferating their opioids on our streets and taking people’s lives,” Gabbard said.

In addition to advocating for the legalization of marijuana, Gabbard called for comprehensive prison reform. A key component to prison reform, she said, was to end the war on drugs. She advocated for providing addicts with treatment and a path to recovery.

“We’ve got to end private prisons. Period,” she said. “The whole system of incentivizing keeping our people in prison so that they can make more money is disgusting. It’s despicable.”

Iowa City resident Larry DeVore said one of the biggest things that attracted him to Gabbard was her anti-intervention policies. He agreed that the US could invest in social services by pulling out of wars overseas.

“If we save money on that, health care’s not an issue,” he said.

Gabbard said at the event that she has not taken money from PACs or lobbyists. UI graduate student Ellie Healy said that was one of the most important issues that led her to support Gabbard.

“I think it is really important for candidates to not accept corporate PAC money,” she said.