Young Americans for Freedom aimed to "spark a dialogue" about border security on the T. Anne Cleary Walkway on Thursday. 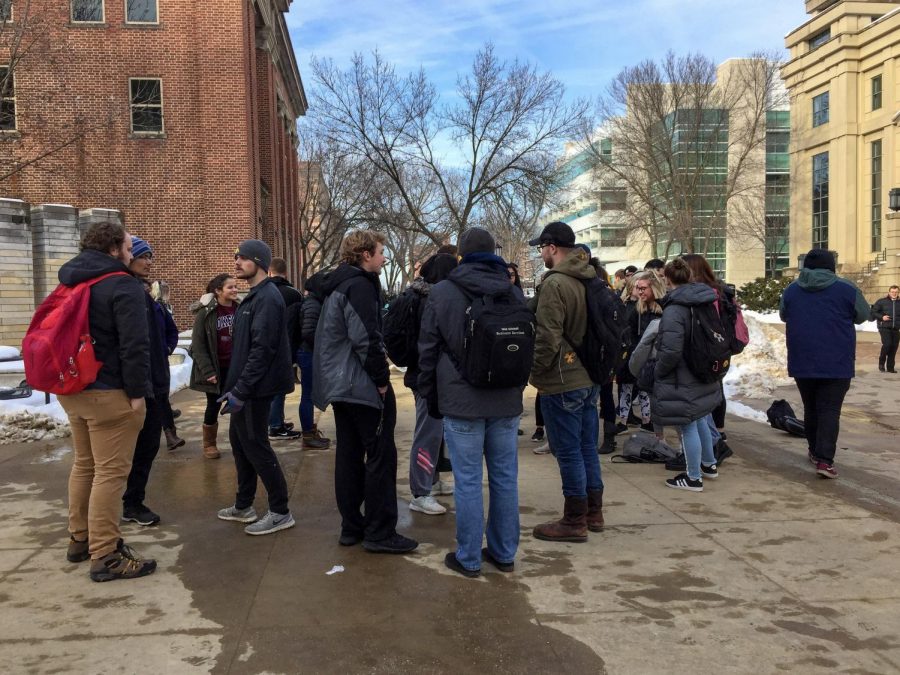 Members of Young Americans for Freedom clash with counter-protestors on the T. Anne Cleary Walkway on Thursday. Some students, like Adriana Peterson, said the some of the language surrounding the border wall is 'targeted and xenophobic.'

Members of Young Americans for Freedom and groups of counterprotesters clashed on the T. Anne Cleary Walkway on Thursday afternoon over President Trump’s pursuit of a border wall along the U.S.-Mexico border.

Among the heated chants and grimaces from onlookers, around a half-dozen members of the conservative student organization aimed to “spark a dialogue” about border security, Young Americans for Freedom Vice Chairman Alex Cappel said.

Nationally, Cappel said, Young Americans for Freedom has encouraged member schools to create dialogue about the importance of border security. Some notable examples, he said, include Michigan and Florida.

“One of the biggest things we’ve found is people don’t understand what we mean when we say ‘build the wall,’ ” he said. “Many people want to dismiss us as racist, but we’ve found a lot of common ground. Some of the concerns we’ve heard today are that people don’t think a border wall is cost-effective, and many of the protesters have been shouting and screaming at us.”

Cappel said the Campus Events Committee had denied his organization the right to demonstrate but took an appeal to the Dean of Students Office and had a discussion with University of Iowa Vice President for Student Life Melissa Shivers.

“I met with Shivers and said, ‘Look, we want to spark a dialogue with people about this issue,’ ” he said. “People don’t understand what we actually believe, and we just wanted a chance to talk with people. Our organization is new, and we wanted to say ‘Hey, this is what we believe, but we’re not hateful people because of it.’ ”

In a statement to The Daily Iowan, UI media-relations manager Hayley Bruce said the university “values the First Amendment” and iterated that the university encourages the respectful exchange of ideas on campus.

“Young Americans for Freedom’s initial request to reserve Kautz Plaza was at first denied because the university has a policy that does not allow structures, including tents, tables, kiosks, or similar structures on Kautz Plaza without prior approval by the vice president for Student Life,” Bruce said. “The student organization intended to erect a wall out of tarp and PVC pipes as part of the event.”

The events committee proposed Hubbard Park as an alternative location because structures are permitted in that space, Bruce said.

“The committee also gave the student organization the alternative of using Kautz Plaza and including their tarp as a banner over their table to align with university policies,” she said.

Bruce said their appeal was granted based on the current operations manual policy:

• To protect campus landscaping and buildings

UI student David Coos said much of the rhetoric he had witnessed came across as xenophobic and racist, and although every group deserves an opportunity to speak, there are “good” and “bad” ways of going about it.

“I do think that freedom of speech is important, because it’s outlined in the Constitution, but I think once groups start instigating fights or arguments, that’s when the line gets crossed,” Coos said.

UI student Adriana Peterson, a member of the Diné Menominee denomination, said she was getting ready to leave for class when her group chats “blew up.”

“I ran out the door, got on the bus, and have been witnessing this for about an hour now,” Peterson said. “I haven’t been engaging with members of Young Americans for Freedom, though. I feel like today, they have been attacking in a targetory way, and we need to realize that we’re all people, and groups shouldn’t ‘make a scene’ when they’re talking about political speech.”