The No. 10 Iowa women had a strong start in its matchup with Indiana on Thursday night, only to fall to the Hoosiers in the waning seconds of the matchup. 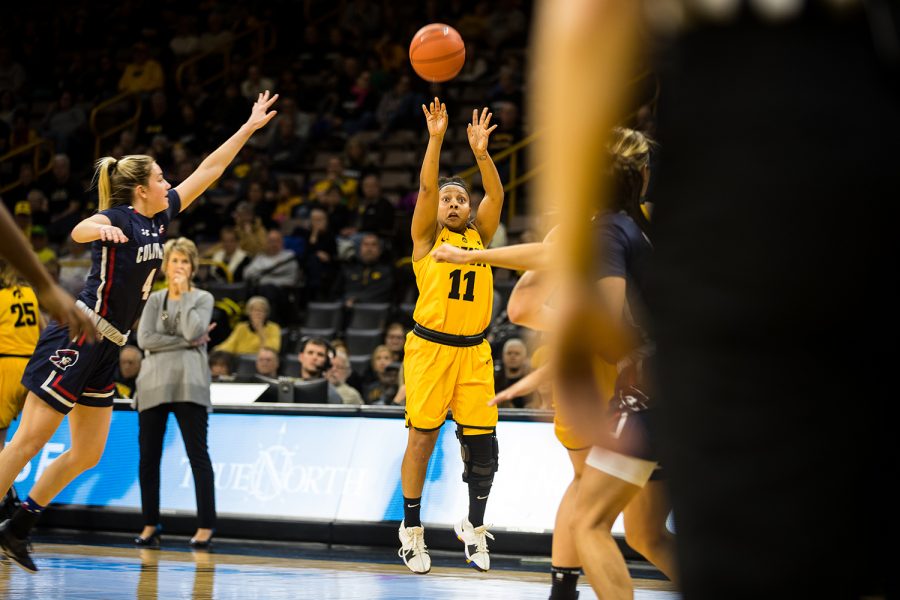 Guard Tania Davis attempts a three-pointer during the women's basketball game at Carver Hawkeye Arena on Dec. 2, 2018. The Hawkeyes won against Robert Morris 92-63.

The No. 10 Iowa women’s basketball team just isn’t the same team when it’s not in Carver-Hawkeye Arena.

“Maybe the pressure got to us a little bit,” head coach Lisa Bluder said. “I don’t know, but we have a target on our back and everybody is going to give us their best shot and we got the best shot from Indiana.”

Both teams played a tightly contested first half, which finished with a 38-30 Hawkeye lead. But it was the second half that held all the action.

Iowa came out of the second half with spunk, rallying to an 11-0 run before they ran out of batter. They spluttered, letting Indiana end the quarter on a 10-1 resurgence.

Early in the fourth, the Hawkeyes were able to build their lead back up to 8 points, but Indiana quickly erased it and took a small lead of their own.

Tania Davis sunk a 3-pointer with 22 seconds left to tie the game, but it was no use after Bendu Yeaney knocked home a layup before blocking Davis’ last second shot at the other end.

It was just Yeaney’s fourth point of the night. However, it was the difference for Indiana in a narrow 75-73 win over Iowa.

While Yeaney was the late-game hero for the Hoosiers, it was Ali Patberg and Brenda Wise who caused problems for Iowa throughout the game.

Wise did most of her work down low, racking up 24 points with 12 rebounds, while Patberg added 21 points and 7 assists.

“[Indiana] did a good job of trying to clog up the middle and taking away the paint,” Bluder said. “They scored to many 3s on us; we let them have too many open 3s. Having Patberg back into their lineup sure helped them.”

There weren’t any surprises in Iowa’s box score. Megan Gustafson had her usual double-double (the 80th of her career), posting 26 points, 12 rebounds, and a block.

No. 8 Maryland won its game tonight, so the Hawkeyes find themselves one game behind the Terrapins with just two games left for each team.

This makes being the outright Big Ten regular season championship unlikely for the Hawkeyes. However, it may be a loss that bodes well for them heading into March.

“The pressure is off now,” Bluder said. “Now we have to go out and play our best basketball and get ready for that Big Ten Tournament.”

In March, a loss means the preverbal death of the season, and a loss like this late in the regular season can serve as a reminder to this team that every team they face can beat them on any given night.