It’s only the third weekend of action for Iowa softball, but the team is looking to prove it is in midseason form in Orlando. 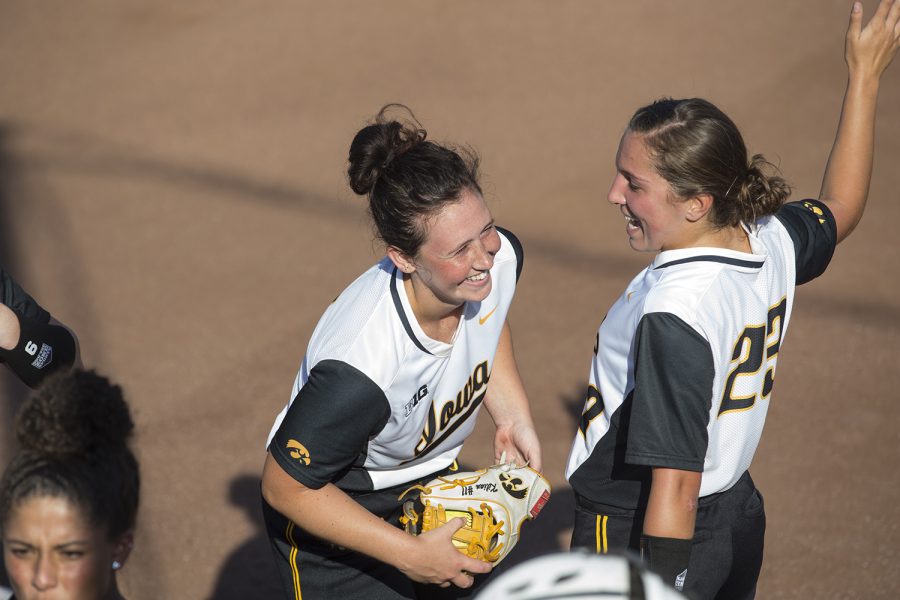 Senior Mallory Kilian and junior Alex Rath joke around during the Iowa v Kirkwood softball game at the Pearl Softball Complex in Coralville on Sept. 14, 2018. The Hawkeyes defeated the Kirkwood Eagles 10-6.

Iowa softball (3-6) will return to Orlando, Florida, this weekend for action in the 2019 Diamond 9 Citrus Classic, with the games taking place at ESPN’s Wide World of Sports Complex.

The Hawkeyes are in midseason form and will see their third weekend of action in the young season.

Several Hawkeyes pose threats for opponents, even though the team has six losses.

Senior Mallory Kilian leads the team in hitting with a .391 season average, and she has scored 3 runs. Kilian put up 2 doubles in the team’s victory over UMass on Feb. 17.

Junior Allison Doocy has posted some strong outings. The ace pitcher has a 2.46 ERA in 37 innings. Before a rough outing against Missouri last weekend, Doocy led Iowa with a 1.38 ERA.

Some fresh faces have given the Hawkeyes a few jolts as well. Junior transfer DoniRae Mayhew launched a game-winning homer on Feb. 17 against UMass. Along with her hitting prowess, Mayhew is growing as a pitcher and has compiled 11.1 innings.

Freshman Hallie Ketcham leads the team in runs scored with 4 and is second in batting average at .333. She scored both of the team’s runs in its win over Kansas on Feb. 15.

With another long weekend ahead of it, Iowa has more growing to do. The Hawkeyes should have an easier time in these next few games with some more beatable teams.

Fordham, Notre Dame, and Oregon State are all under .500 entering the weekend. The Hawkeyes have faced a decent number of high-level teams, so it will be a welcome change of pace.

Still, there will be some challenges this weekend. UAB is at a stable 5-5 thus far but has scored at least 10 runs in all of its wins. Notre Dame, although it is under .500, has wins this season over No. 3 Washington and No. 20 Oklahoma State.

A recently added matchup with the Czech National Team presents an interesting experience for the Hawkeyes. With conference matchups just around the corner, challenges such as this one will help them gain the growth they need.

Certainly, Iowa has some strong hitters and promising players. But it is still a young team with only two seniors, and it is clearly in the midst of a massive change in culture.

First-year head coach Renee Gillispie leads the team through all of these changes. With her first slate of Big Ten matchups only a few weeks away, there is a lot to figure out in the short term. But it is easy to see the optimism, especially from the players, about the future of the program.