On Feb. 19, UISG heard from UI CFO Terry Johnson, who spoke about a possible partnership between the UI and a private utility firm. 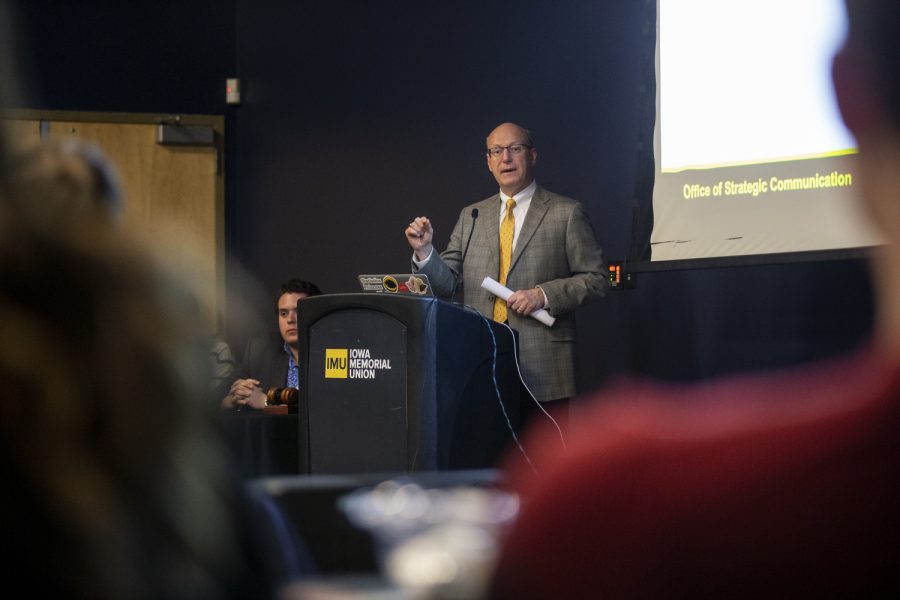 The University of Iowa Student Government heard a presentation on Tuesday about a possible partnership between the UI and a private utility firm, and members had the opportunity to ask questions during the meeting.

The UI announced on Feb. 8 it would consider entering a public/private partnership to maintain and operate its utility system after Gov. Kim Reynolds requested the state’s three public universities explore such options.

UI Chief Financial Officer Terry Johnson spoke to UISG about the partnership and what it would and wouldn’t mean for the UI and its employees.

Johnson stressed that this partnership would not eliminate university jobs. If the UI does enter into a partnership, 80 to 90 percent of the staff will work for the private party and then return to the UI when the partnership ends. Those employees who do not stay at the plant will be shifted to other areas of the university..

“The bottom line is, the intent under this agreement is not to reduce staff,” Johnson said.

The firm will also have to comply with the UI’s campus-wide sustainability goals, such as making the Power Plant coal-free by 2025.

UISG Sen. Carolina Herrera said that while it’s one thing to have a goal of 2025, it is another to continually work toward sustainability goals for 50 years. She asked how students will be involved in the process.

“Are issues pertaining to sustainability being considered in the process, and who will be at the table?” she said.

Johnson said the firm will need to continue to look for new sustainable, lower-cost fuel options while operating the utilities. Because students are in the Office of Sustainability, he said, they are involved in helping the UI meet its goals. The firm will also be charged with keeping the facility in working order.

UISG Speaker Pro Tem Jacob Heid was concerned about keeping the private firm accountable for what the UI has tasked it with doing.

While the UI does not have any specific measures planned, Johnson said, not meeting the goals the UI has set will have consequences. For instance, if the firm closes the plant for an unacceptable amount of time, there might be a monetary penalty.

Johnson emphasized throughout the presentation that everything is only in the research stage. No official decisions have been made. If the UI moves forward with plans to find a private partner, no funds would be allocated until fiscal 2021, which begins July 1, 2020.

The UI is working with consultants, including Wells Fargo, to help with the process, he said.

Johnson said at the meeting that the UI has the power to back out of any partnership up until the moment the agreement is signed.

“It’s very important to remember that this is not a done deal,” he said. “We’ve got a lot of work ahead of us.”

UI Faculty Senate and Staff Council have both discussed the pros and cons of such a partnership, bringing up concerns over how this partnership might hurt the university.

Johnson plans to meet with the Graduate and Professional Student Government on March 4, and he will hold town halls on the West and East Campus on March 5 and 6, respectively.