Down by 12 at one point, Iowa looked to pull off yet another comeback this season. Maryland had other ideas. 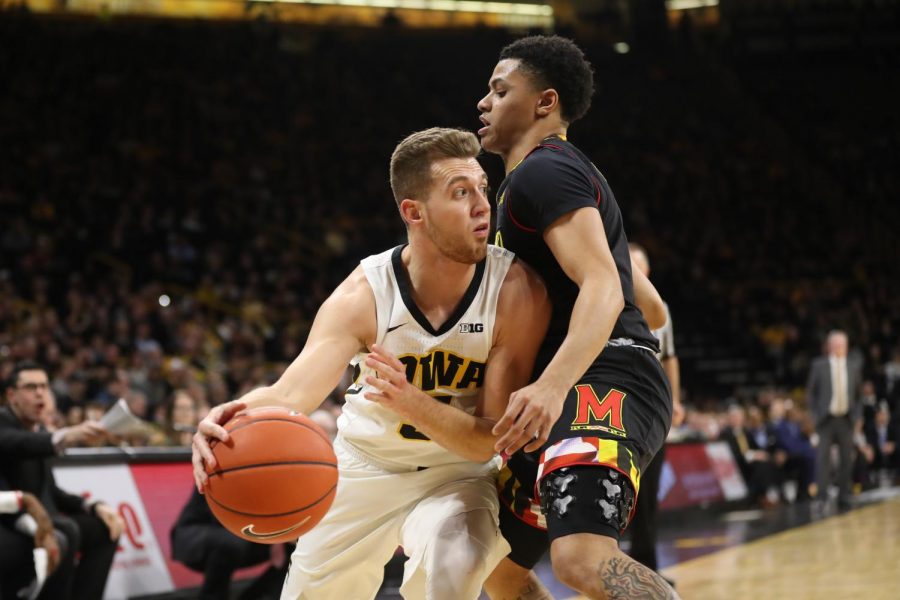 No. 21 Iowa erased a 12-point second-half deficit against No. 24 Maryland on Tuesday. With time winding down, it seemed as though fans were about to witness a re-run of the Northwestern comeback.

But, after two-straight game-winners for the Hawkeyes, things came crashing back down to earth as they lost, 66-65, to the Terrapins, ending a four-game winning streak.

Terrapin Bruno Fernando tipped in a missed layup with 7 seconds left in the game to give his team a 1-point lead, and Iowa missed two shots in the game’s final possession – a forced 3-pointer by Jordan Bohannon and a floater by Isaiah Moss off the miss from downtown.

“I forgot that the chances of us making game-winning shots at the buzzer isn’t super high, because after the last few games you’d think it is,” Tyler Cook said.

Bohannon argued that on his last shot, Maryland’s Anthony Cowen fouled him on his arm.

“It was on my forearm, but I guess that’s part of the ball though,” Bohannon said.

Iowa’s frustration ran high during the game. The Hawkeye offense struggled to get into a rhythm for most of the night, and at times, that frustration boiled over. During one play stoppage, Bohannon tossed the ball at the hoop.

“I think I was getting frustrated at the officiating, as much as I hate to say it,” Bohannon said. “I think Cowen should have fouled out in the first half, honestly, with the way he plays. Every official knows how he plays… if I put my hand on him it’s a foul, but he can ride me all game. I get called for a ticky-tack foul in the first half when I don’t even touch him, so that’s just how it goes sometimes.”

The Carver crowd shared that frustration as well. The 11,986 fans in attendance watched Iowa shoot 32.8 percent from the field for the entire contest – nearly a 15-percent drop in shooting than its season average. Iowa missed its last five shots of the game.

Bohannon led the Hawkeyes with 14 points, but he made just two of his 11 field goal attempts. Isaiah Moss (4-for-14) was the only Hawkeye to reach 10 points.

“I don’t feel like [Maryland] did anything special,” Cook said. “I didn’t get a lot of looks today, but I’m fine with that if other guys are getting good looks.”

McCaffery said postgame that he’d like Cook to shoot more than four times, whether that would be in transition or within the motion offense, but it just wasn’t working out that way.

And that could be said for the entire offense. After battling back to lead in the closing

Looking big picture, the loss is in no way a season-killer for Iowa. The Hawkeyes sit at 20-6 and hold a 9-6 record in conference play.

With Friday’s clash with Indiana looming over the horizon, Iowa remains confident it’ll bounce back. Both McCaffery and the players said the same thing postgame – sometimes the shots fall, especially at the end. Tuesday was not one of those instances.