Iowa will likely look to its 1-2 punch of Spencer Lee and Austin DeSanto to get the Hawkeyes rolling against No.2 Oklahoma State. 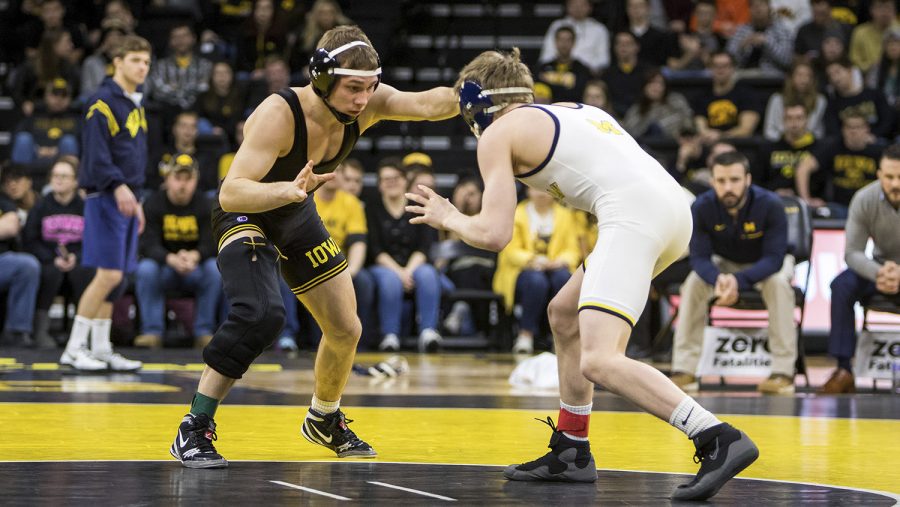 When Hawkeye wrestling faced Wisconsin on Sunday, the featured 165-pound match of No. 3 Evan Wick and No. 2 Alex Marinelli didn’t come until after intermission.

But when No. 3 Iowa takes on No. 2 Oklahoma State on Feb. 24 in Stillwater, two matches with top-four wrestlers will probably get the dual started, setting the pace for the rest of the afternoon.

“If history is any indication, this thing will probably start at 125,” Iowa head coach Tom Brands said. “[Oklahoma State coach] John Smith is a purist, not speaking for him. That’s going to go a long way in determining the dual, and we love our two guys there. We love them.”

Those two guys are some of the best Iowa has to offer — No. 2 Spencer Lee and No. 3 Austin DeSanto.

Lee will likely get the Hawkeyes started at 125 pounds.

“I like being the first match,” he said. “That’s what it’s like being a 25-pounder, we’re used to it. It’s kind of a routine now. It’s going to be a lot of fun going out there and starting off right for the team. That’s the goal, that’s the plan, that’s what I train for, and that’s what the coaches want me to do.”

Lee has a record of 16-1, with his only loss coming at the hands of top-ranked Sebastian Rivera of Northwestern. Against the Cowboys, Lee will take on No. 4 Nick Piccininni, who has a 26-0 record. The last time the two met up, Lee was dominant, pinning him in the second period.

“I was just ready to go,” Lee said. “The match just went my way, and I wrestled hard, I just got the ball rolling, scored points, and ended up getting the fall. He’s always a great opponent.”

DeSanto, on the other hand, has never faced his opponent, No. 2 Daton Fix. Fix and DeSanto have each suffered only one loss.

The Hawkeye wrestlers like to look at the next match as the biggest one, but DeSanto’s big matchup will get him set on what he needs to focus on for the Big Ten Tournament, March 9-10 in Minneapolis, and the NCAA Championships, March 21-23 in Pittsburgh.

“A tough opponent like him shows me what I need to work on before the big tournament, before it gets really serious, but I’ve just got to stay focused on this guy and worry about what I need to get done for this match,” DeSanto said.

Although Lee and DeSanto have the responsibility of getting the momentum started for the dual, the matchups will play a big role in getting the Hawkeyes prepared for the postseason.

The atmosphere for an Iowa-Oklahoma State wrestling dual will be nothing short of crazy, making Gallagher-Iba Arena the place for wrestling fans to keep their eye on.