The Study of Time: Half a century in the watch and jewelry world

You would think that spending more than 60 years in any given career would become mundane. But for Willa Dickens, who co-owns Herteen & Stocker Jewelers and has been working in the jewelry business for more than half a century, every day is a new adventure. 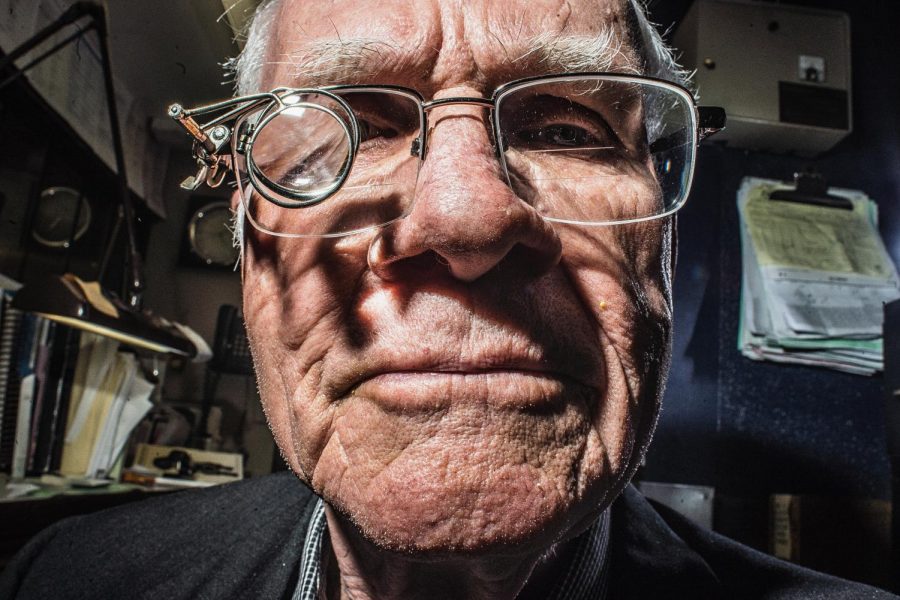 Co-owner of Herteen & Stocker Jewelers, Willa Dickens, poses for a photo in his office on Thursday, Jan. 18, 2017.

“Hi, Willa? My name is Charles Peckman — I called about writing a profile on your career …”

“I don’t remember talking to you. I have dementia.”

Before I could attempt to stifle my extreme embarrassment, the man sitting in front of me let out a boisterous laugh; I clearly had been duped. The man, Willa Dickens, is the co-owner of Herteen & Stocker, one of Iowa City’s oldest jewelry stores.

Standing around 6 feet tall with wisps of ivory-white hair, Dickens’ checkered purple tie and jewelers loupe (which is built into his glasses, naturally) give him the appearance of a Sean Connery-era Bond villain or less-than-legitimate Mafia surgeon. Despite being well into his late-80s, Dickens is as sharp as a tack. And his humor, just like his love for jewelry and watches, is apparent from even the quickest of interactions.

Willa — not Mr. Dickens, as he told me to call him — began working in the jewelry business when he was 14 years old at the now-defunct Fuiks Jewelers, which was located at the current home of Beadology. At the time, Dickens was paid 25 cents an hour, a “great rate,” he said.

In today’s money, Dickens was making about $4.48 an hour.

“I had to scrub the floors, and in the wintertime, it was really bad,” he said. “[My boss] taught me how to fix clocks, and I fixed clocks for him for four years, all throughout high school.”

A week after graduating, he enrolled in the American Academy of Horology (the study and measurement of time) in Denver; coincidentally, he began school the same year that Herteen & Stocker opened, 1947.

But the school’s tuition was $30 a month ($338 adjusted for inflation), so Willa took a job with the railroad to afford his classes. Between five hours a day of school and eight-hour railroad shift, he had a half-hour break.

“It’s the first hard work I really did in my life,” he said. “I remember when I got home after my first day on the railroad, I thought I was dying. I slept very well that night, and I thought to myself, ‘I have to do this again tomorrow?’ ”

Toiling for hours on the railroad every day for 35 cents an hour and attending class may seem antiquated, he said, but he noted that many students are in a similar position today, taking on jobs in addition to their education. While in school, he said he learned different ways to save money.

“One thing I learned from a few of the regulars at the local diner was how to add ketchup to bean soup so we could get extra nutrition,” he said. “The era was different when I was growing up. My daughter used to call me tight — but my generation was different. We used to put cardboard in our shoes when we went to school, and my underwear was made out of flour sacks.”

When Willa graduated from “watch school,” as he affectionately calls it, the first watch he wanted to buy was a Hamilton. At the time, Hamilton watches were made in the U.S. and the entry-level piece was around $75. One model, the “Boulton,” was so popular Hamilton re-issued it in the 1980s, nearly 40 years after its original release.

It is important to note, Willa said, that this was decades before the introduction of quartz (battery powered) movements. Even the “simplest” watches had dozens of small parts.

Today, he said, there is still a segment — albeit a small one — of his customer base that purchases automatic watches. These watches, he explained, do not require a battery to run; they rely on a rotor that spins as the watch is worn, which builds up energy in the mainspring.

“What’s happened with the evolution of watches is they have gone from self-winding to quartz to solar,” he said. “People still like fine watches, but the average jewelry store no longer is the place where people buy their watches. The watches companies themselves have brought this about — now, they sell direct-to-consumer.”

That direct-to-consumer model, he said, has had an effect on Herteen & Stocker. Two weeks ago, he received a letter from Daniel Wellington, a small watch brand his store carries, stating his business no longer “fits into their marketing plan.”

“The small, independent jewelers helped [those brands] get started,” Willa said. “We took them on when no one else wanted them — when we got the same letter from other brands, it almost destroyed our business.”

According to the most recent data from the Jewelers Board of Trade, a staggering 886 North American jewelry businesses closed their doors in 2017 — 706 privately owned retailers, 109 wholesalers, and 71 manufacturers.

Although Willa’s formal training is in horology, he has also sold precious gems for decades. Even though a diamond is still a diamond, he said, the most significant change has been the complex grading scale that can mean the difference between $100 and as much as $50,000 or more.

“Years ago, I bought out a jeweler and he carried out a tray of diamonds, and all of the similar-sized stones were the same price,” he said. “As time went on, [the industry] began establishing grading labs, and people began looking at a piece of paper instead of the stone itself. I would get questions like, ‘What is the color? What is the clarity?’ And I wasn’t used to that.”

From a metallic and wooden desk drawer, Willa pulled out a hefty stack of jewelry price guides. As he flipped through dozens of pages, he said the smallest imperfection in a stone can reduce its value significantly; moreover, he said with an exasperated sigh, the “quality” of a stone has never been more scrutinized.

“He could talk all day about this stuff,” son and co-owner Terry Dickens said from around the corner.

As I was learning about the different levels of diamonds (and their corresponding prices, which ranged from reasonable to astonishing), a younger-looking man walked into the store, looking to sell a vintage stainless steel Omega Seamaster he had purchased in an estate sale.

Willa quickly looked at the piece, turned it around, and then did something that would seem strange to the average non-watch person; he put the watch up to his ear. This, he explained, is to make sure the watch is ticking consistently; many vintage pieces tick five times per second, but higher-quality movements, he said, can even tick 10 times per second.

“Tell him I’d give him $125 for it,” he said, quickly handing the Omega to a sales associate. “The face will need to be redone, and the least it needs is an oiling and cleaning, which’ll be anywhere from $200 to $300.”

Right in front of me, I had witnessed decades of experience in the jewelry business; simply put, I was in awe. As we concluded our interview, Willa stood up and peered around his store with tired yet eager eyes. He glanced at his watch, a Rolex OysterQuartz in stainless steel and 18-karat gold, and smiled at the rows of display cases in front of him.

Of the thousands of watches, of the hundreds of iridescent jewels, of the dozens of lifelong customers whose faces are seared into his memory, Willa said there are still watches, jewels, and customers he has yet to see. This, he said, makes every day — even 60 years later — unique.