Sen. Kirsten Gillibrand, D-N.Y., made campaign stops in Cedar Rapids and Iowa City where she touted the Green New Deal legislation and condemned what she called President Trump’s negligence to address climate change. 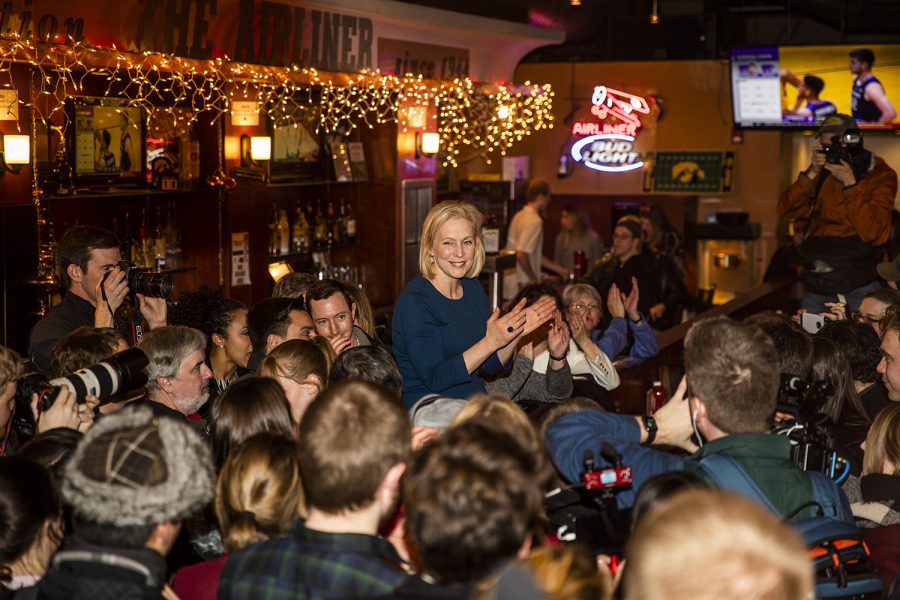 Sen. Kirsten Gillibrand, D-N.Y., engages with the crowd during her campaign stop at The Airliner on Monday, February 18, 2019. Gillibrand visited Cedar Rapids and Iowa City as she campaigns for the democratic nomination for the 2020 Presidential Election.

Likely Democratic presidential candidate and senator from New York, Kirsten Gillibrand, made campaign stops in Cedar Rapids and Iowa City on Monday, where she condemned President Donald Trump’s negligence on the issue of climate change and touted the controversial Green New Deal legislation.

The Green New Deal, a joint resolution introduced in the U.S. House of Representatives, which outlines legislative goals to impose economic reform to existing fossil fuel and infrastructure programs, including a carbon tax on companies that emit carbon dioxide, and investing heavily in renewable energy. The plan could potentially cost up to $1 trillion according to an estimate from the American Action Forum.

“[Trump] doesn’t care that we have severe weather all across this country and people are dying. He doesn’t care that it’s probably the greatest economic opportunity of our lifetime– to take on green jobs and green energy and have a Green New Deal,” Gillibrand said at the Chrome Horse Saloon in Cedar Rapids.

Gillibrand also said “it’s sad” that some members of the Republican Party do not believe in global climate change, adding that she has a bold vision in investing in renewable fuels and creating job opportunities.

She said she had her “a-ha politics moment” when she was working as a lawyer and saw first-lady Hillary Clinton giving a speech in Beijing about how “human rights are women’s rights.”

“She really spoke to me to say get off the sidelines and start getting involved in politics,” Gillibrand said.

Gillibrand was elected as the representative for New York’s 20th Congressional District in 2007. Gillibrand was appointed to Hillary Clinton’s Senate seat in 2009 when Clinton first ran for president.

Gillibrand announced her Presidential Exploratory Committee on Jan. 15 on Stephen Colbert’s The Late Show. She hasn’t officially announced her candidacy.

She talked about her first Congressional race in upstate New York and said that a pollster told her that there was no way she could win because it was a largely Republican district. Gillibrand said that her opponent had called her “another pretty face.”

“He tried to demean me as a young female candidate,” Gillibrand said.

Janice Weiner, Iowa Democratic Party state central committee member and former candidate for the Iowa Senate, said that she’s been impressed with the whole Democratic field so far, but said she likes the initiative that Gillibrand has taken in her campaign.

“Any one of them (the Democratic presidential candidates) would be an enormous improvement from our current president,” Weiner said at Gillibrand’s Iowa City meet-and-greet at Airliner.

Weiner saw Gillibrand speak at the Women’s March in Des Moines, adding that Gillibrand did a good job reaching the crowd.

Avery Cassell, long-time Cedar Rapids resident, said he was relieved to see a politician like Gillibrand show faith in what she wants to change, and said that he liked her approach to health-care reform better than proposals from other Democratic candidates.

“My family knew that when [Trump] became president that we were going to struggle and he wasn’t going to care,” Cassell said. “[Gillibrand] knows it’s going to be a challenge and she’s not going to give up.”

Gillibrand made visits to Central and Western Iowa shortly after announcing her exploratory committee and canceled an Iowa City event on Jan. 20 due to weather.

Gillibrand said in Cedar Rapids that she plans on spending a lot of time in Iowa.