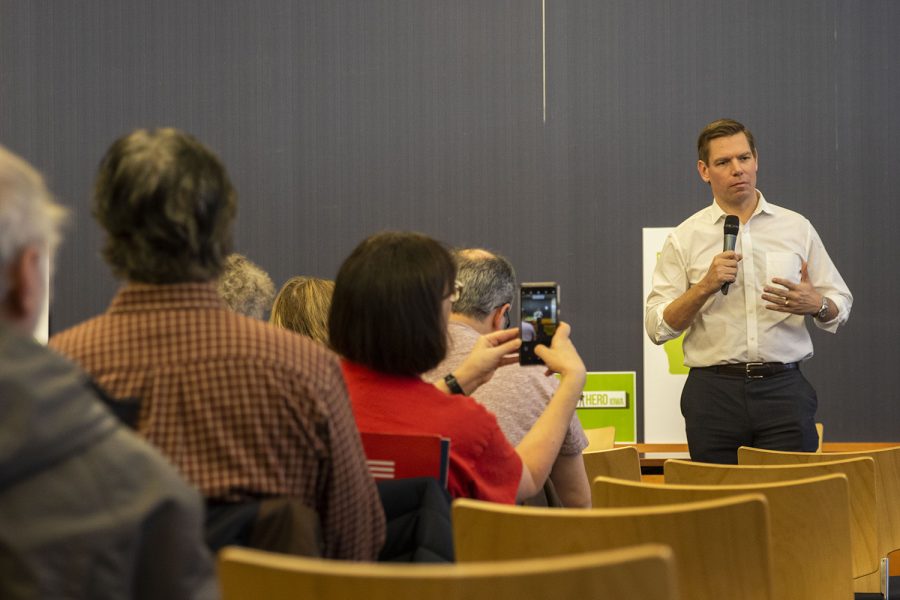 U.S. Rep. Eric Swalwell, D-Calif., speaks during an event at the Iowa City Public Library on Monday, February 18, 2019. Rep. Swalwell is expected to announce a candidacy for President of the United States.

“I’m about to jump in, the water’s warm,” U.S. Rep. Eric Swalwell, D-Calif., joked Monday, referring to his decision on whether or not he will be running for President.

The Sac City native turned California Congressman made a stop in Iowa City ahead of a potential announcement regarding his candidacy for the Democratic nomination for President.

“I expect very soon to make an announcement,” He added in all seriousness during a town hall-like event held Monday afternoon at the Iowa City Public Library.

The event was intended to be a discussion on the earned-income tax credit in Iowa with J.D. Scholten, state director of Working Hero Iowa and former Democratic nominee for Iowa’s 4th Congressional District, but the conversation quickly shifted to Swalwell’s potential candidacy and stances on issues.

One issue that Swalwell has been vocal about and that he discussed with those in attendance was gun control.

He is a supporter of banning and buying back assault weapons, investing in mental-health services, and more background checks for firearm sales.

Swalwell is one of 231 co-sponsors of HR 8, a bipartisan bill to mandate background checks on all firearm sales. Iowa’s three Democratic representatives Abby Finkenauer, of District 1, Dave Loebsack, of District 2; and Cindy Axne, of District 3 also co-sponsor the legislation.

“I think he seems to understand the problem not just as a simple issue but the larger complexities around it,” said Holly Sanger, an activist with the gun safety group Moms Demand Action.

On the day before the one-year anniversary of the deadly shooting at Marjory Stoneman Douglas High School in Parkland, Florida, the committee held a markup, a meeting where committee members consider possible changes, on the bill alongside HR 112, a bill which also looks to increase background checks on firearm sales. The committee also held a hearing at the beginning of February about preventing gun violence.

Member of Moms Demand Action and former teacher Lorraine Whittington along with Sanger said they appreciated Swalwell’s comments on the issue.

“He has a real holistic approach to it,” Whittington said.

Swalwell, who represents California’s 15th Congressional District, said during a Sioux City event that he has eight staffers in the state, according to *The Sioux City Journal*. He has made two trips to the Hawkeye state this year. He visited Cedar Rapids and Marion in late January and his current visit included stops in Council Bluffs, Sioux City, Carroll, Atlantic, Creston, Albia, Iowa City, and Indianola.

Swalwell won reelection in November, having received 73 percent of the vote, according to election result data from the California Secretary of State Office. He first assumed office in 2013.