Iowa has impressed as of late, but it welcomes another strong Big Ten opponent in Maryland on Tuesday. 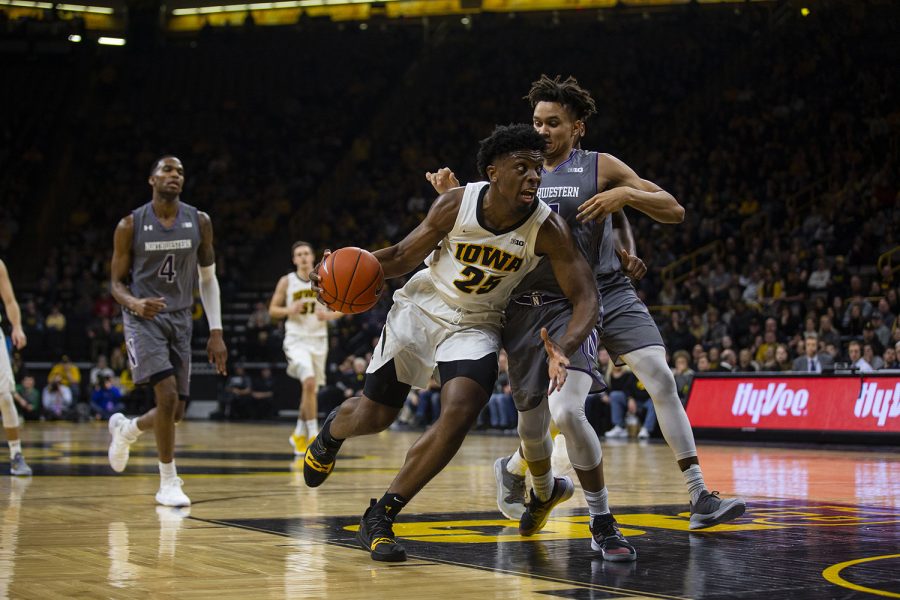 Iowa forward Tyler Cook drives to the basket during the Iowa/Northwestern men's basketball game at Carver-Hawkeye Arena on Sunday, February 10, 2019. The Hawkeyes defeated the Wildcats, 80-79.

Iowa basketball has had everything a fan could possibly want recently: drama-filled games, buzzer-beating victories, and a four-game Big Ten winning streak.

The Hawkeyes will look to keep that streak of success alive as they welcome Maryland to Carver-Hawkeye at 7 p.m. today.

Despite the victories that have continued to come for Iowa, it might enjoy a break from the high-blood pressure and stress that comes with close games.

But either way, the Hawkeyes are now 5-1 in games decided by 5 points or fewer, a testament to how far the Iowa program has come since a dreadful 4-win conference season in 2017-18.

“I think we have a group that is executing well, whether we are running our late-game action, our set plays, or whatever,” Iowa head coach Fran McCaffery said in his Monday teleconference. “We have good ball-handlers, passers, and we don’t have turnover guys … I think it’s a collective thing with personnel with what we’re doing.”

Iowa’s contest against the Terrapins has all the makings of another intense Big Ten battle.

Maryland has been one of the better teams in a deep conference this season, coming into the game ranked No. 24 in the latest AP Poll.

With wins over Wisconsin and Purdue, the Terrapins can’t be taken lightly.

Maryland has numerous players who can fill up the bucket, including Anthony Cowan, who ranks eighth in the Big Ten with 15.8 points per game. But the biggest matchup of the night will be centered in the paint.

Tyler Cook and Bruno Fernando have been two of the conference’s best big men this season. Both are in the top five in the Big Ten in rebounding and in the top 16 in scoring.

Cook averages 16.3 points a game, while Fernando sits at 14.5, good for seventh and 16th, respectively.

Fernando has the edge in rebounding, though, placing second with 10.6 per game. Cook ranks fifth with 8.1.

“He’s really consistent,” McCaffery said. “Last year, he was a freshman, and he was great, and some days he’d be in foul trouble or wouldn’t be as effective. This year, I think he’s got a real command of what he wants to do and what he expects from himself, what they expect from him. He’s playing like a veteran.”

Joining Fernando and Cowan in double figures is Jalen Smith, who posts 11.8 points a game.

“Maryland has a lot of weapons; they can go inside, they have multiple shooters, they have speed and quickness and guys who have done it before,” McCaffery said. “They have a good combination of things that make them hard to guard.”

The Terrapin defense has been solid throughout the season; it ranks fifth in the Big Ten, allowing 64.6 points per game. Iowa proved it can overcome stifling defense, though, as it did in its 74-59 victory over then-No. 5 Michigan on Feb. 1.

Maryland’s defensive downfall has come in the second half, however, which is when Iowa has heated up recently. The Terps have allowed 776 points in the first half, but that mark rises to 903 in the second.