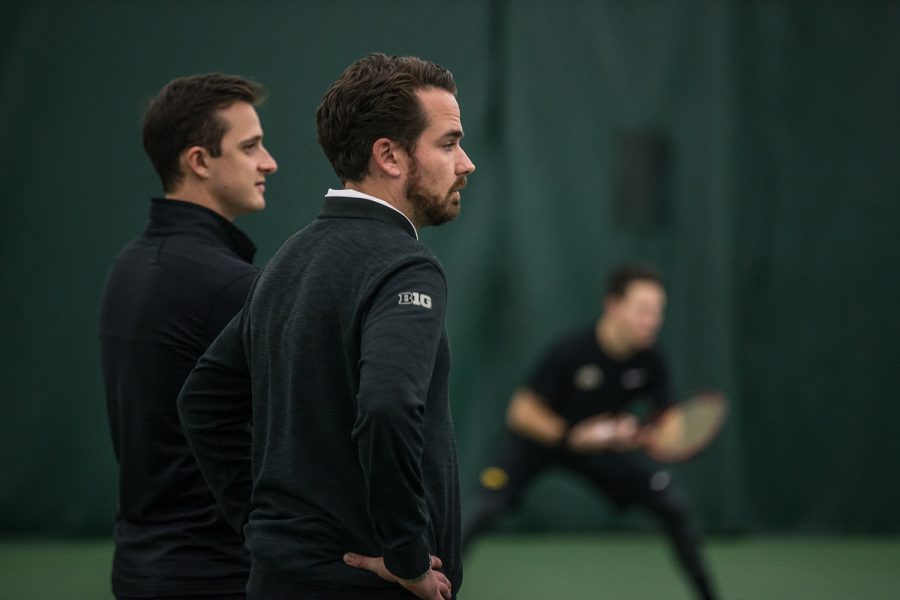 Iowa coach Ross Wilson watches his team during a men's tennis match between Iowa and Marquette on Saturday, January 19, 2019. The Hawkeyes swept the Golden Eagles, 7-0.

The Iowa men’s tennis team has quickly become one of the premier tennis programs in the Big Ten.

The main reason is that head coach Ross Wilson has decided to look outside the United States for his players. Since becoming the head coach in 2014, he’s brought in 12 international players, most of whom have top-tier talent.

“The one thing about tennis is it’s different from a lot of the college sports,” Wilson said. “It’s truly a worldwide sport, and a lot of the talent is outside the States.”

This year alone, the Hawkeyes have seven international players on the roster and two American players. Their performances are a key to the Hawkeyes going 8-1 this season, their best start in the Wilson era.

Even so, just because the majority of the better players come from outside the United States doesn’t mean anyone can become a Hawkeye. They have to fit Wilson’s mold.

“It comes down to the fit,” he said. “You have to fit in here academically, you have to want to be a part of a team, and then you also got to have the ability to improve and be able to compete.”

Finding guys who can fit all these credentials can be difficult. Wilson routinely looks at the list of the International Tennis Federation top-1,000 juniors in the world each year. He then looks at the players from countries that have a lot of English speakers because of the difficulty of the English proficiency exam students must pass to be able to enroll here.

Then, through social media, Wilson gets into contact with players he thinks will be a good fit and finds out what tournaments they will compete in overseas.

Last summer, Wilson went on a 10-day recruiting trip to Italy, Switzerland, England, and Germany. Assistant coach Joey Manilla did the same, scouting talent in Hungary and Portugal. They also did another trip at the end of the summer as well as scouting during Thanksgiving and Christmas breaks.

Although one might think it would be difficult to persuade someone to move to a different country to play a sport, Wilson thinks otherwise. His main selling point is using college as a way to improve athlete’s tennis as well as a way to get a quality education.

“Persuading them that college is the right pathway isn’t difficult,” Wilson said. “The difficult part is more and more schools are going [international].”

Many men’s international tennis players are coming to the U.S. is because there’s no middle ground for these athletes; it’s either junior tennis (18 years or younger) or professional careers.

To make things more difficult, the average age of a professional tennis player is 27, so that leaves many tennis players with an eight to 10-year age gap because of the high cost of paying for tournaments and travel.

Wilson thinks it has been easier to recruit talented players from international countries. Being in Iowa presents challenges with the weather, which makes it hard to recruit top players from the East and West Coast as well as the South.

Furthermore, it’s been a struggle to get players from the state of Iowa because there’s simply not a lot of Big Ten-level talent in the Hawkeye State. In fact, since being named head coach in 2014, Wilson has yet to recruit a single Iowan.

“It’s one of those things where we are looking for the best players to try to compete on a national level, and if they’re not in the state, then we have to go elsewhere to find them,” Wilson said.

As Iowa tennis gets better, the Hawkeyes will continue to recruit internationally. The Hawkeyes might even snag a top recruit from the East or West Coasts every so often.