Gustafson and Hawkeyes look to March

With the regular-season Big Ten race winding to a close, the Hawkeyes are inching toward the postseason. 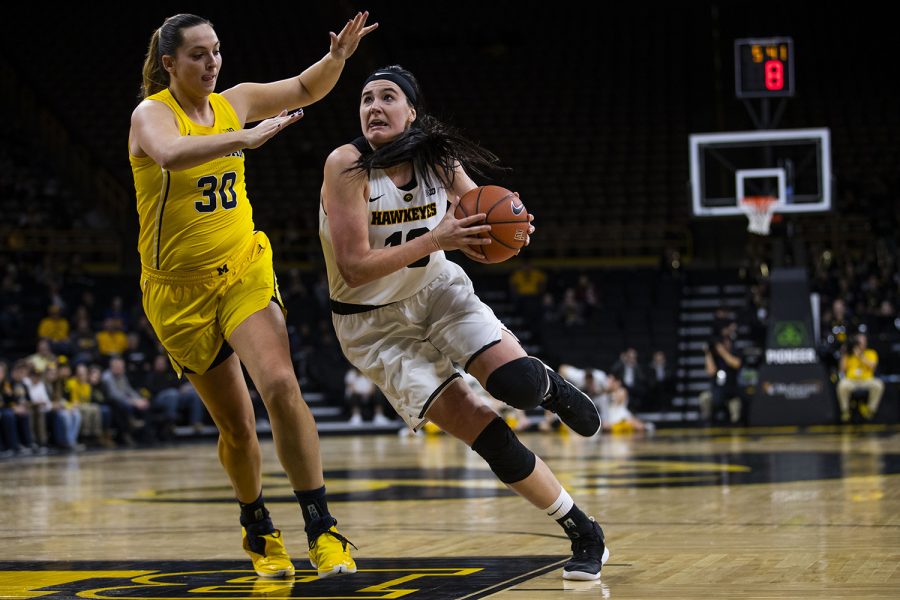 Iowa forward Megan Gustafson drives to the basket during the Iowa/Michigan women's basketball game at Carver-Hawkeye Arena on Thursday, January 17, 2018. The Hawkeyes defeated the Wolverines, 75-61.

Megan Gustafson now has almost every major record possible for an Iowa basketball player. She has more rebounds, points, double-doubles, and Player of the Week awards than any Hawkeye has ever had.

Yet, she has still yet to accomplish one of her biggest goals.

“I would love to win a Big Ten championship,” Gustafson said at the team’s media day before the season.

It is the one thing that has eluded Gustafson as she nears the end of her magnificent career.

After a win over No. 8 Maryland on Sunday, Gustafson and the Hawkeyes are on the cusp of claiming the Big Ten regular-season crown.

With Sunday’s win, Iowa is now tied with Maryland for first place in the Big Ten at 12-3. If Iowa were to win the Big Ten regular-season championship, it would be its first since 2008 and its 10th overall.

Maryland and Iowa both have three games remaining in the regular season, and none of them are against top-tier Big Ten teams. But that doesn’t mean it’s going to be an easy finish.

“When you look at the Big Ten this season, on any given night, anyone can beat anyone,” Maryland head coach Brenda Frese said.

Even so, it seems likely the two teams will split the regular-season crown. However, Iowa would get the No. 1 seed in the Big Ten Tournament because it beat Maryland head-to-head.

A high position in the Big Ten Tournament would also likely be followed up by a favorable seed in the NCAA Tournament.

Part of what makes the women’s tournament different from the men’s is the top four seeds in each region get to host the first two rounds of the tournament.

The Hawkeyes have prided themselves on home-court advantage this season, winning all 12 of their home games so far, making the prospect of hosting their first two games in the tournament a sweet one.

“It would be terrific,” Bluder said. “Everybody knows the advantage of playing on your home court. We would love to host the first round, but we know we have to finish really strong.”

In order to secure home-court advantage for the NCAA Tournament and a Big Ten regular-season championship, the Hawkeyes are going to have to win on the road this week.

First, they’ll travel to Bloomington, Indiana, to face the Hoosiers before coming back to Carver-Hawkeye for a date with Nebraska.

Iowa then finishes the regular season with a matchup against Northwestern on March 3.

Some players in Gustafson’s shoes might be content with personal records, but that’s not the case for Iowa’s post player, who believes she’s approaching the most important part of her Iowa career.

“Winning a championship [is my focus]; I’d love to win a Big Ten championship, and I know my teammates would say the same thing,” Gustafson said. “I’d love to host the NCAAs. That would be amazing … my focus has always been on the team, and I’ll continue to do that.”