The No. 14 Iowa women beat No. 7 Maryland for the first time since 1992 on Sunday afternoon. 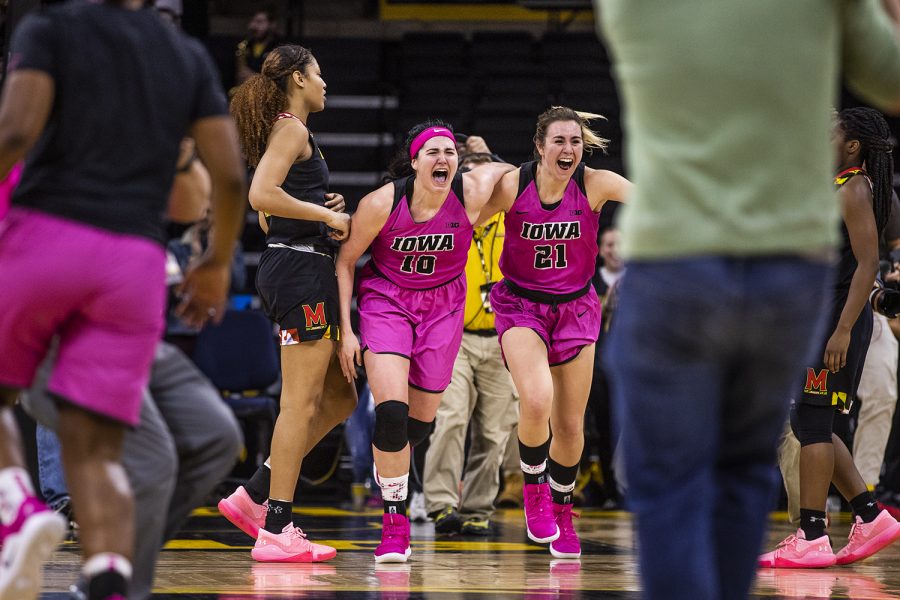 The Hawkeyes are now tied with the Terps at the top of the conference standings. It was the team’s first win over Maryland since 1992.

“We have three games left; we’ve got a lot of work still to do,” head coach Lisa Bluder said. “We’re going to get refocused, but I’m going to let them enjoy this one for about 24 hours, and then we’ll get to work on Indiana.”

Because of Gustafson’s quiet opening minutes, Iowa looked for production from all over, and six Hawkeye players tallied points for the team in the first quarter. All the points were needed — the Hawkeyes were tied with Maryland at the half.

Iowa came out of the break swinging.

Maryland held Gustafson back in the first half, but the Terps fell into foul trouble early in the second as a result.

Uncharacteristically, it seemed as if Gustafson might fall short of a double-double after the first half. The Terrapins had success in defending her in the opening quarters, a large reason the game was tied at the break.

“They were just throwing extra bodies on me,” Gustafson said. “That usually happens. When it happens, I’m able to try to figure out what else I can do, whether that’s getting my teammates open [or] being a decoy.”

Chaos ensued in the third quarter.

Gustafson came very close to notching a single-quarter double-double in the third, putting up 12 points and 9 rebounds.

Gustafson rarely gets fired up, but an incredible run combined with a tough first half yielded emotional play. An and-1 with 5:30 left in the third capped her tear and gave the team an 8-point lead.

“They did a great job in defending her, but she will wear teams down,” Bluder said. “And eventually, she’ll get open. They foul out because you can’t really guard her. They bring two people at her, but she’s so strong. She will just wear people out inside eventually.”

Still, the Terrapins refused to go away.

Maryland went on an 11-point run in the opening two minutes of the fourth quarter and took the lead on a jumper by guard Taylor Mikesell.

Terp guard Stephanie Jones, who put up 21 points, caused Iowa serious trouble in the second half. She led the Terps through an exciting fourth-quarter that saw numerous lead changes.

Iowa had a tough night from beyond the arc, shooting 3-for-13. But Alexis Sevillian came into the game and launched a 3-pointer with 2:29 left in the game to put Iowa up by 6, all but ending the chances of a Maryland comeback.

Though it’s perhaps too soon to tell, the game may have served as a pseudo-Big Ten championship because it was the only meeting between the two. The Hawkeyes are now tied with Maryland in the conference standings with the head-to-head victory.

The team continued its undefeated home record with the win. Bluder’s team beat the Maryland squad in front of the largest home crowd of the season despite the snow-packed roads in Iowa City and environs.

“We have something special,” Bluder said. “I just want to share it with everybody.”