UISG President Hira Mustafa has vetoed the bill, which passed the UISG Senate on Tuesday, due to concerns about the budget for catering lunch, marketing and design, and photography. 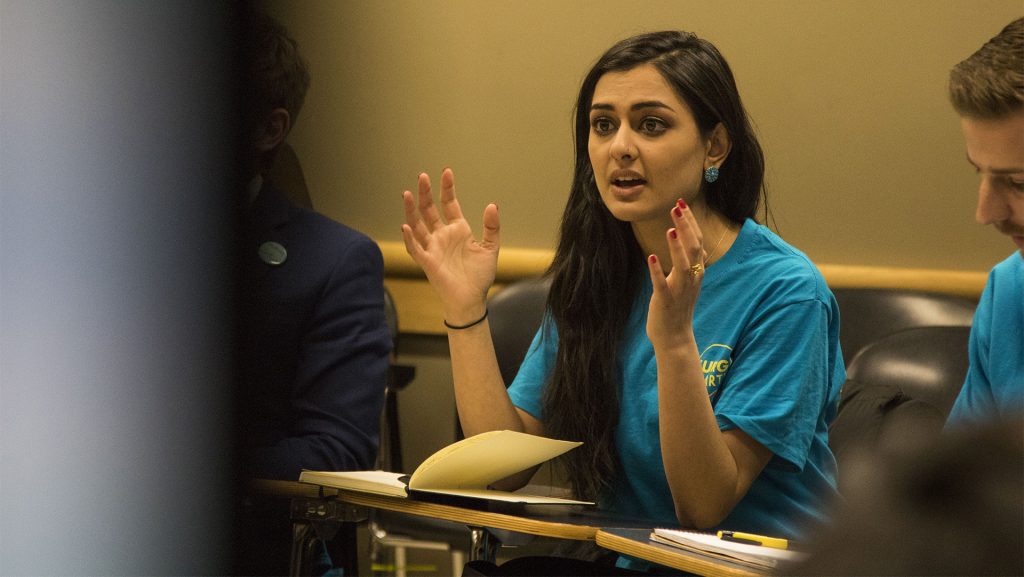 UISG President Hira Mustafa speaks in an interview with The Daily Iowan in Adler Journalism Building on Wednesday, March 21, 2018.

Student Senate Bill 31 allocated a maximum of $25,700 to the summit, which would be used for speakers, a venue, catering, marketing, and other materials. UISG Sens. Alexia Sánchez, Guowei Qi, and Oscar Rodriguez, sponsored the bill, which passed on Tuesday 38-7, with two members abstaining.

According to the bill, “The purpose of this event is to increase outreach, support, and allyship for first-generation students at the University of Iowa, as well as strengthen community ties with other first-generation graduate and professional students, staff, faculty, alumni, and other community members.”

UISG will also reach out to other UI campus partners for support, the bill stated. The UI Vice President for Student Life’s Office and President’s Office have supported the event.

In her veto statement, Mustafa said she supports the First-Generation Summit as a whole, but she believes there needs to be responsible spending of the money provided by students through a $36 per-semester Student Activities Fee. UISG has a $1.8 million budget, according to the statement.

“I am choosing to veto this bill on the grounds of unjustified spending when more affordable, practical alternatives are built into our institution through our communications team, as well as through strategic partnerships with IMU Catering and Marketing & Design,” Mustafa said in her statement.

The bill budgeted $5,500 for catering lunch. In Mustafa’s statement, she said the First-Generation Summit Committee said the cost per person would be $22.80 because attendees will be plated and served. Mustafa said UISG could save $2,330 by paying for an IMU lunch buffet instead, which would include an appetizer, main course, snack, and various beverages.

The summit also received a $2,500 grant from the Center for Student Involvement and Leadership, which would bring the cost down to $3,170.

Mustafa said UISG could save all the money from the Student Life Marketing & Design budget of $566 by reusing old lanyards and purchasing sticker name tags.

“The component of this line item that is ​most​ unsustainable is the cost,” she said.

The external photographer has apparently already started working, Mustafa said, and there had been concerns regarding whether he should be compensated for the work he had done so far. She said he knew there was no guarantee of payment, and the allocation is unnecessary.

“It is disrespectful to ignore the talent UISG already has ​that has been hired​ for these tasks at no-cost and then continue to agree on compensation for an outside photographer,” Mustafa said. She added that last year, an external photographer was used because UISG did not have a photographer at the time.

Overall, Mustafa said she believes UISG could save $3,986 if her budget recommendations are accepted.

“I want to reiterate that I am in full support of the goals outlined in the, “I’m the First’ First-Generation Summit at Iowa,” bill,” Mustafa said in her statement. “However, I urge the [summit committee] and UISG Senate to re-evaluate the budget and consider how UISG should be more cost-effective and responsible with using student dollars for the First-Generation Summit moving forward.”

The student Senate could override Mustafa’s veto at its Feb. 19 meeting.