Iowa basketball took down Rutgers, 71-69, on Joe Wieskamp's banked 3-pointer at the horn. 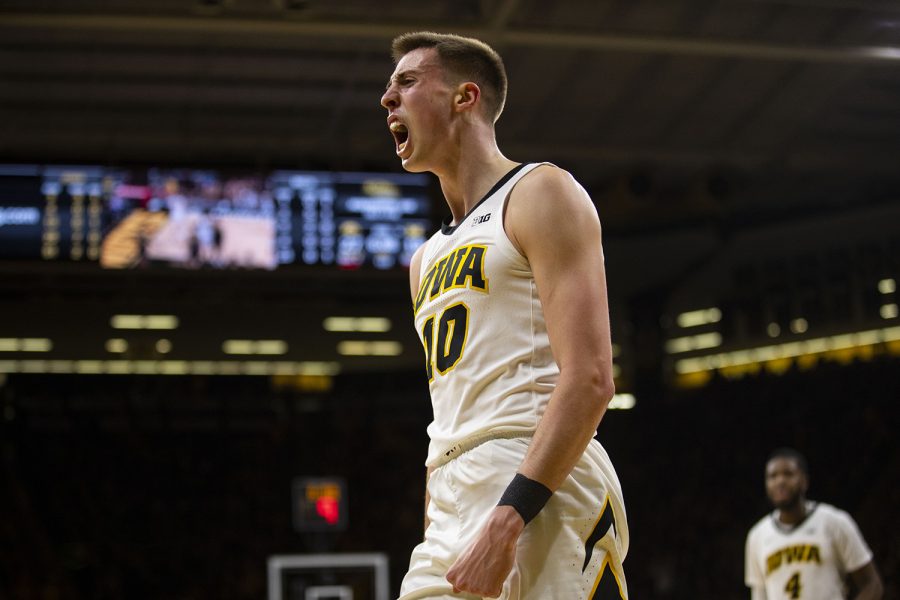 Iowa forward Joe Wieskamp reacts after making a layup during the Iowa/Michigan men's basketball game at Carver-Hawkeye Arena on Friday, February 1, 2019. The Hawkeyes took down the No. 5 ranked Wolverines, 74-59.

Another game, another buzzer-beater for Hawkeye basketball.

No. 21 Iowa took down Rutgers, 71-69, on Joe Wieskamp’s shot at the horn. Iowa threw a full-court pass and the ball bounced around into Wieskamp’s hands. The freshman threw up a shot which banked in off the side of the backboard, giving the Hawkeyes their 20th win of the season.

Rutgers took a late 1-point lead with 3.2 seconds left after Geo Baker hit a 3-pointer – a friendly roll just like Wieskamp’s shot. Rutgers’ defense held Iowa without a field goal for the final 5:30 of the game until Wieskamp banked in the winning bucket.

Jordan Bohannon scored a team-high 18 points (15 in the second half) in the win. Isaiah Moss added 17 points on 7-of-12 shooting from the floor. Tyler Cook rounded out the double-digit scorers with 12 points and a team-high 7 rebounds.