Iowa lost, 7-2, to George Mason in Florida on Friday. 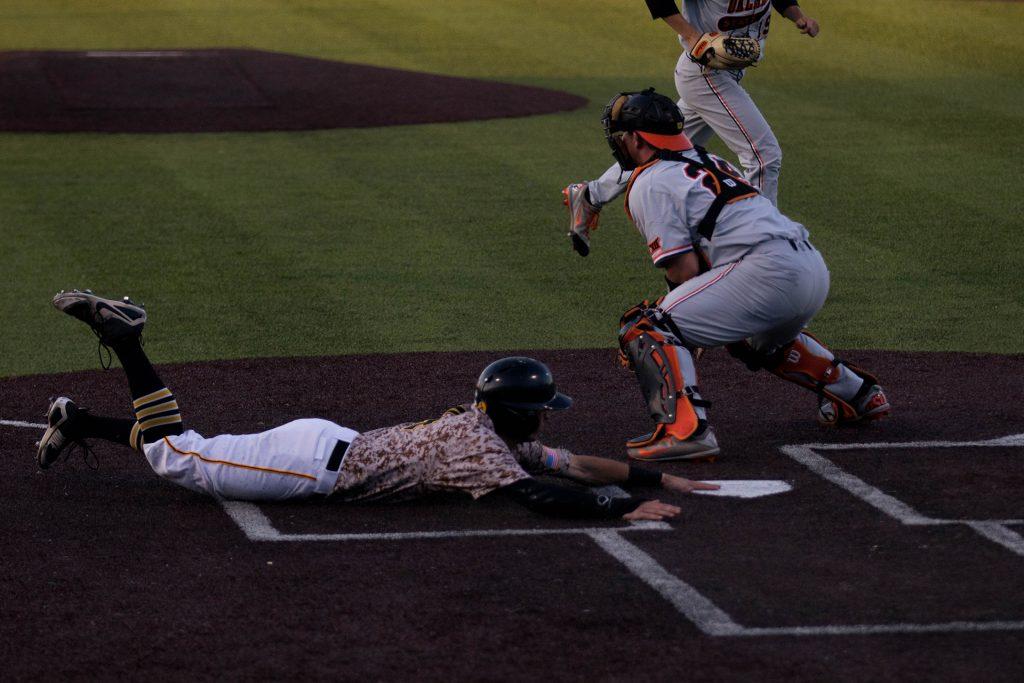 The Daily Iowan; Photos by Megan

Ben Norman slides at home during Iowa's game against Oklahoma State at Banks field on May 4, 2018. The Hawkeyes were defeated 7-6. (Megan Nagorzanski/The Daily Iowan)

Iowa baseball started off its season 0-1 after dropping its season-opener to George Mason, 7-2.

George Mason jumped out to a 3-0 lead after Logan Driscoll sent a two-run home run over the fence after fellow Patriot Daniel Brooks ripped a triple to right field.

“It started out how I expected – a good pitcher’s duel between Cole McDonald and [Jared] DiCesare,” Iowa head coach Rick Heller said in a release. “That’s what it was for the first three, four innings before we gave up a three-spot in the fourth. Cole made a couple mistakes — one to their best hitter — and he hit it out of the park, so we’re down 3-0.”

McDonald’s first start of the season lasted just four innings. He gave up the game’s first 4 runs on 5 hits while striking out four batters.

Offensively, Izaya Fullard and Austin Martin were the only Hawkeyes with 2 hits. Mitchell Boe (in the leadoff position), Chris Whelan, Tanner Padgett, and Ben Norman each notched a single hit.

The Hawkeyes were 0-for-10 with runners in scoring position.

Iowa made things interesting by cutting George Mason’s lead to just 2 runs heading into the seventh inning, but the Patriots scored 3 runs to close the game out.

Next up for Iowa is Pittsburgh. The Hawkeyes and Panthers clash at 10 a.m. for their second game of the Diamond 9 Sunshine State Classic.