If Iowa tops Indiana and Wisconsin in another double-dual weekend, a perfect Big Ten season awaits. 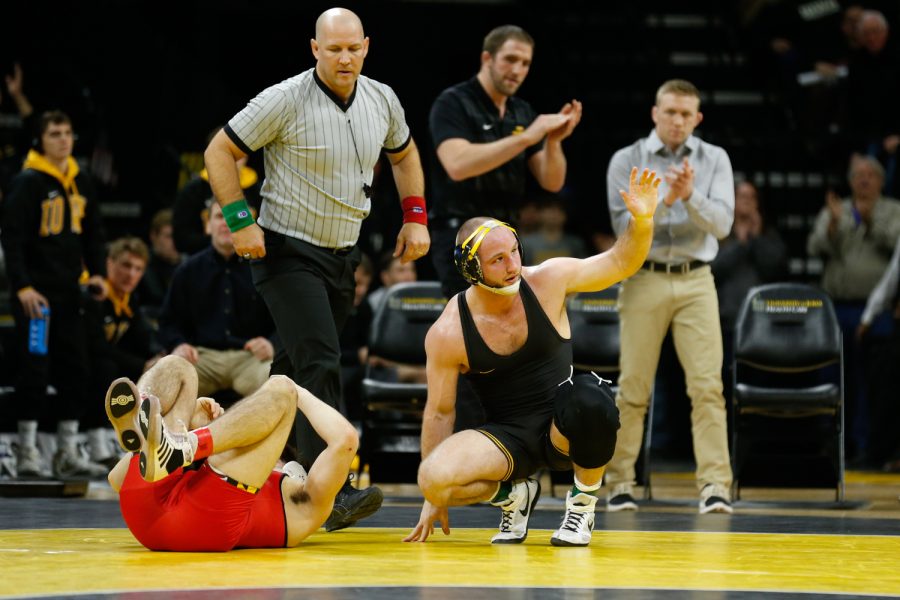 Iowa Wrestler #2 Alex Marinelli waves to the crowd after defeating Maryland Wrestler Phillip Spadafora in the 165lb weight class during a wrestling dual meet at Carver-Hawkeye Arena on Friday, Feb. 8, 2019. Marinelli won via pin at 3:50 and the Hawkeyes defeated the Terrapins 48-0.

The No. 3 Hawkeye wrestling squad will try to finish its undefeated season this weekend against Indiana today in Carver-Hawkeye and No. 16 Wisconsin on Feb. 17 in Madison.

The Hoosier dual will be Iowa’s last home meet of the season, meaning it will be Senior Night for three Hawkeyes — Sam Stoll, Mitch Bowman, and Perez Perez.

“It’s that time of year again — there’s still wrestling left,” head coach Tom Brands said. “So it’s a good celebration but more than that, we’ve got work that’s left undone, and they know that.”

Indiana hasn’t beaten the Hawkeyes since 1968, but the Hoosiers have landed a couple of notable wins, defeating No. 12 North Carolina and No. 25 Stanford. Indiana has a 5-10 record, 1-6 in the Big Ten.

The Hawkeyes will turn to their senior leadership for one last time at Carver-Hawkeye.

“Tom always says he doesn’t believe in senior leadership, but these seniors play a very important role on this team,” 165-pound sophomore Alex Marinelli said. “They’re great guys. They show up, they want to work hard, and they bring a good vibe in the room.”

Wisconsin is 3-5 in the Big Ten, with wins against Nebraska, Maryland, and Illinois. Despite the losing record, the Badgers will likely feature five ranked wrestlers, three of whom are in the top 10.

“We’ve got to be ready for 10 weight classes,” Brands said. “There’s some matchups in there where when we go to Madison, Wisconsin, we’ve got to be in tune with those.”

The featured match of the meet will likely be No. 3 Evan Wick and No. 2 Marinelli at 165 pounds. The two faced at Midlands, in which Marinelli defeated Wick, 4-3, in the championship match.

If Marinelli can tally two wins this weekend, he will become the fifth Hawkeye since the 2014-15 season to record a 9-0 Big Ten dual-meet record.

In order to do so, he will focus on taking care of his body and mentality.

“We’ve been through this before, double dual meets,” Marinelli said. “It’s just staying disciplined with your body — helping it feel good, doing everything you need to do with nutrition, diet, making weight, mentality. That’s the biggest thing, mentality. Get the job done on Friday, don’t overlook anything, and then get the job done on Sunday.”

No. 6 Stoll could potentially face his third top-10 opponent in three weeks against Wisconsin’s No. 8 Trent Hillger. Bowman at 174 will get his shot at an upset against No. 10 Ryan Christensen of Wisconsin.

With this being Stoll’s and Bowman’s last home meet and Friday, Feb. 17 double-dual weekend, Marinelli remembers to not hold back.

“It just reminds me to always leave it all on the mat,” he said. “Never leave a stone unturned. You’ve got to make the most of it. I think the biggest thing for them this week is just to have fun.”