Iowa City female entrepreneurs have broken the standards when it comes to who runs the downtown shops. 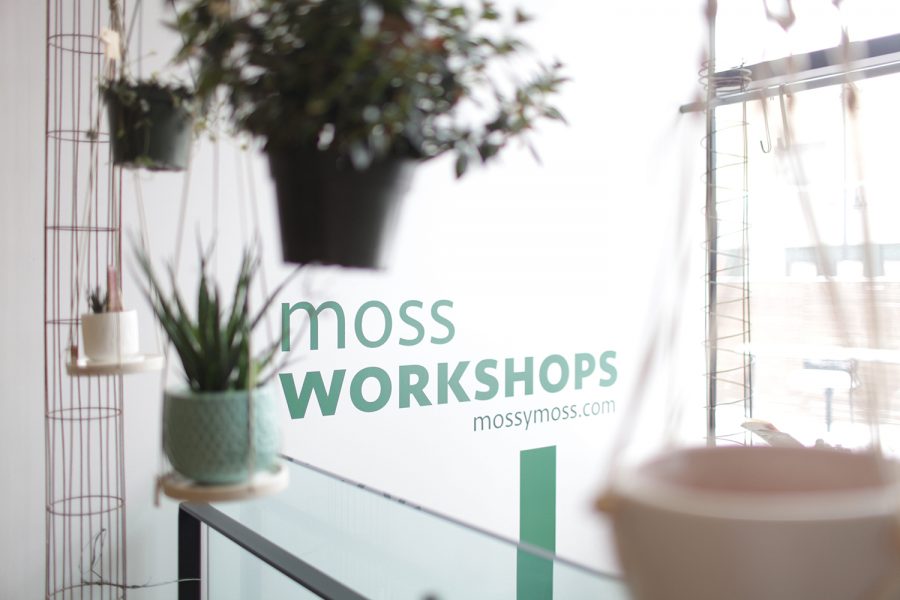 Iowa City offers a unique variety of locally owned businesses, from the plethora of bars and restaurants to small boutique and retail shops tucked away in an almost underground trade market. However, in the window of some shops is are distinct markers: stickers that identify the shop as owned by women.

According to the National Association of Women Business Owners, women-owned firms account for 39 percent of all private firms. A majority of this growth is recent, as the number of the businesses grew 45 percent between 2007 and 2016, according to Experian.

Anne Armitage, the primary owner of the homey retailer Moss, started her Iowa City location more than two years ago, having originally started in Cedar Rapids six years ago. The inside of the boutique-like shop is welcoming with its assortment of unique houseplants and modern décor pots. The smooth, white walls offer a modern-home aesthetic contrasted by emerging columns of brown and gray stone.

As global retail has shifted to more of an online presence with the rise of such companies as Amazon, Armitage said she believes the smaller retail stores are superior to big department stores or online retailers.

“We definitely don’t have the overhead in expenses of a huge department store with tons of staff, and renting tons of square footage, and spending tons and tons of money on inventory. We can keep expenses much lower,” she said. “Our customers want to come into a curated space where someone else has already chosen the best of the best, so they don’t have to spend an overwhelming amount of time making a decision on something by having too many choices. The people who are coming in here are coming in here because they don’t want that online chaos.”

Despite being a lot for one person to manage, Armitage said, she feels supported by the other female entrepreneurs in Iowa City.

“I belong with that tribe of women opening retail shops. I definitely feel a part of that movement,” she said. “I don’t know if it’s because we’re female-owned, but we seem to be more inclined to take risks on very specialized or very unique, very small boutique-type businesses. In Iowa, we’re an underrepresented group of entrepreneurs.”

Another member of the female-business-owner tribe is Jan Finlayson, who has owned Luxe Interiors for eight years and has been an interior designer for 30 years.

A newer example of Iowa City’s female business embrace is The Shop, a retail store offering vintage items, furniture, and handmade artisan work. Kay Boyer is one of three women who started the original The Shop location in Kalona in 2014. They opened their Iowa City location in August 2018.

Boyer said the establishment is run by a team of three women, who do all the work themselves. She said that if someone is having difficulties, the other two can easy step in and help.

“I love being in this group with these three women. We’re all moms, we all do the juggle,” Boyer said. “It was important for me personally to have a business where I could have my career the way I wanted and also to own my time to take care of the kids the way I wanted, so now I can get ownership of my life to do it both. It’s gone really well, and I think we were taken so seriously from the beginning that I feel like we never had to prove ourselves.”

Boyer said woman pushback has not been a problem, describing her store and Iowa City as “one more cog in the wheel of women empowerment.”

“It’s funny to step back and think, ‘Wow, it’s amazing that we’re a woman-owned business, because this is so normal. It’s crazy to think that 60 years ago that was so faux pas. It’s really cool where society has gone,” she said. “Iowa City has been so welcoming and amazing. It’s been awesome; Iowa City has a really supportive crowd. They’re also so unique because they so support local and that forward thinking, which is a huge surprise.”

Similar, Cortnie Widen said she felt very empowered starting her own business in Iowa City. She opened White Rabbit in 2006 and has moved locations four times since as the store grew larger and demanded a bigger and more accessible space.

“I didn’t think of it as some kind of disadvantage for being a woman; I wouldn’t say I felt that way at all,” Widen said. “I felt supported by fellow friends and family, and I didn’t feel like it was tough for me as a woman to start a business.”

Despite challenges to women opening businesses identified by Experian, including lack of role models, the gender pay-gap, and unequal access to funding, Armitage, Boyer, and Widen said there are advantages of be a woman in the retail world, including the ability to better relate with customers.

Veronica Tessler, the owner of the iconic frozen yogurt shop Yotopia, recognizes the support of Iowa City but also said she demands more representation from the rest of Iowa and the country.

“We have great representation here, especially in downtown Iowa City, but why not? We are half the population; we should be half the number of business owners,” Tessler said. “Let’s talk about business owners who happen to be female instead of female business owners. The thing that we should all aspire to is a time when we’re not surprised that a business is owned by a woman, just as we shouldn’t be surprised when we hear that our elected officials are women. This needs to happen. Let’s reframe our thinking.”

In 2011 at the age of 25, with no prior business experience, Tessler said she overcame many hurdles in opening up Iowa City’s first frozen yogurt shop, describing it as a “huge leap.”

“I had little to no money of my own to contribute, and I wasn’t a franchise so I didn’t have a proven business model,” she said. “Every rejection from a bank, I made sure my business plan was super solid. Some of the banks didn’t even give me the courtesy of a callback. I was a real novice, to say the least. I had no idea what I was doing, but I was determined to solve the problem; the problem was there was no frozen yogurt in Iowa City, and I thought that needed to change. I was denied by six banks before I got my loan through MidWestOne bank.”

Tessler said that women business owners face similar challenges to racial and ethnic minorities, specifically in regard to financing and networking.

She said she respects her staff and gives them the opportunity to learn and grow as women.

“Female business owners are known to have a different management style,” she said. “My hope in running the shop and owning the shop is also to empower young women, and my employees to do their best at whatever task is at hand and to give them the confidence that they have the abilities to solve problems.”

In 2018, the Des Moines Register described Iowa’s diversity and demographics as “poor.”

“The great thing about Iowa City is that we can buck those state trends,” Tessler said. “We are a strong community, a supportive community, and the small-business community, especially female, we’re all connected.”