Seniors Perez Perez, Mitch Bowman, and Sam Stoll will take away more than the ability to wrestle when they leave the Hawkeye program. 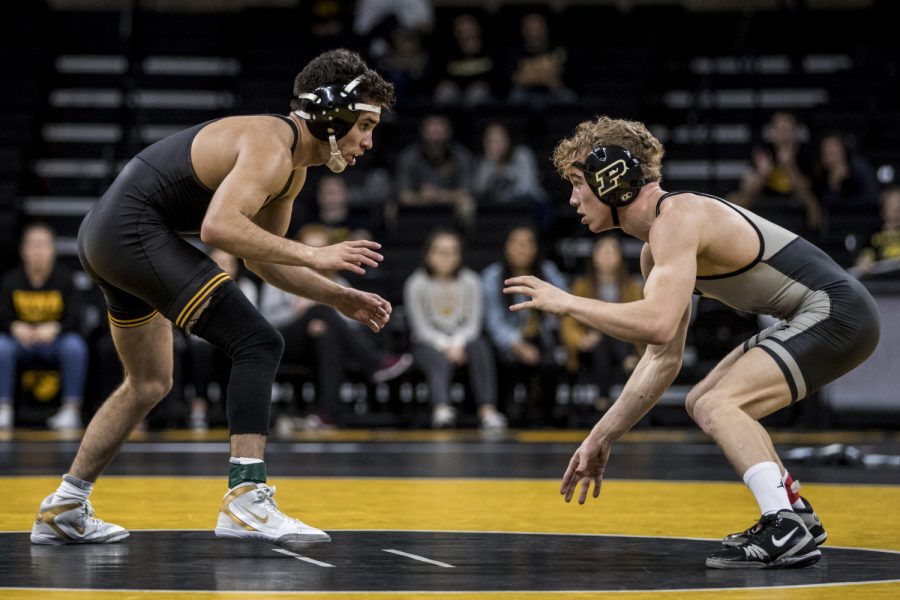 Although there are only two seniors in the current probable lineup — Mitch Bowman and Sam Stoll — the wrestling team will say goodbye to three athletes, including Perez Perez.

Perez hasn’t seen much action on the big stage, but he has had a major impact on Iowa’s success, assuming the role of scrapping partner with Cory Clark, Thomas Gilman, and now Spencer Lee and Austin DeSanto during his four years at Iowa.

“You look at Perez Perez, who has been an unbelievable, staunch pillar of what this program is about when you’re not necessarily in the role that you want to be in,” Iowa head coach Tom Brands said. “He has done nothing but make this place better, make his teammates better, especially those lower weights — people who he rubs elbows with on a daily basis.”

Despite having offers from other schools, Bowman, like Perez, decided he would walk-on at Iowa.

“I’ve always been a Hawkeye since the day I was born,” Bowman said. “My family loves Iowa. I love Iowa. It’s just the dream of every Iowa kid coming up wrestling, wrestling for the Hawkeyes, continuing the legacy of the program.”

RELATED: Ready in the wings, ready on the mat

From 174 pounds to 285, Bowman has wrestled at four weight classes in his career at Iowa, stepping in whenever or wherever the Hawkeyes need him.

“There’s definitely been lots of ups and downs,” Bowman said. “I’ve been from 74 to heavyweight. I’ve had a couple knee injuries, a couple shoulder injuries, and it’s been crazy, but it’s been great. That’s what life’s all about. It’s about facing adversity and coming out a stronger person at the end of the day.”

Last season, Stoll placed fifth at NCAAs, fourth at the Big Tens, won Midlands, and earned the title of All-American. But after facing a knee injury, he was unable to compete for the first part of his senior season.

“I mean obviously it’s not what I want,” Stoll said. “I haven’t wrestled every match and had that loss a couple weeks ago, but [this season is] a memorable one. I guess they all are in different ways. [I’m] looking to finish out strong this year.”

Stoll is 7-1, with his only loss coming from No. 14 David Jensen when the Hawkeyes faced Nebraska on Feb. 3. He bounced back the next week, though, and tallied a win over No. 9 Youssif Hemida of Maryland.

“It’s not fun that it’s my last time wrestling at Carver; I wish I could do it for the next 30 years, but that’s just not realistic,” Stoll said. “I guess I’m not really emotional in that sense, but I’m sure I’ll have some emotions. But I’m looking forward to it.”

Whether it’s playing a role behind the scenes, having to make sacrifices to help the bigger picture, or facing unexpected events in life, the Iowa wrestling team has taught its seniors more than wrestling.