Iowa’s showed its clutch gene on multiple occasions this season, holding a 6-2 record in games decided by 8 points or fewer. 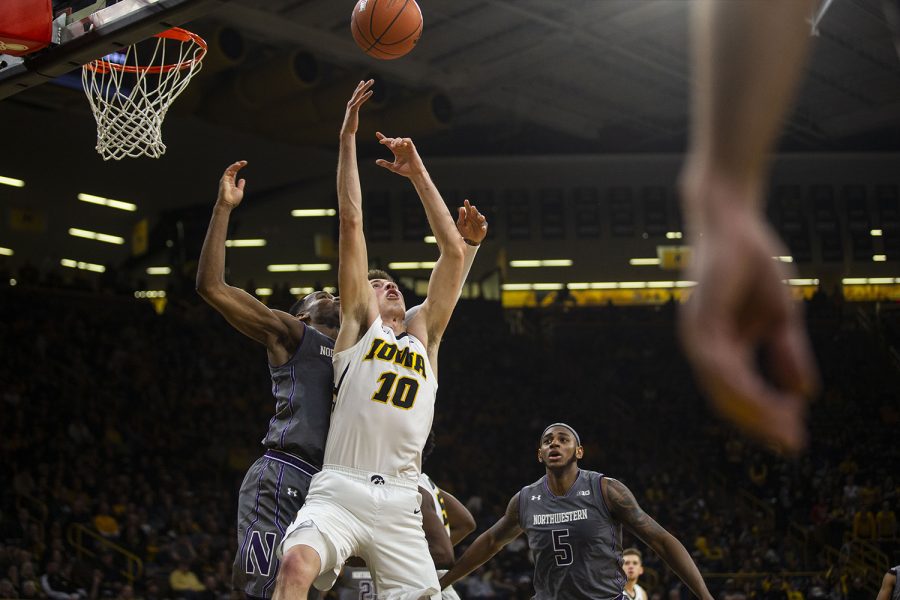 Iowa guard Joe Wieskamp to grab a rebound during the Iowa/Northwestern men's basketball game at Carver-Hawkeye Arena on Sunday, February 10, 2019. The Hawkeyes defeated the Wildcats, 80-79.

After each close win, the consensus among the Hawkeye basketball players remains the same — this season’s team has a certain clutch factor to it that previous squads have lacked.

During the 2017-18 basketball season, the Hawkeyes were 3-8 in their 11 contests decided by 8 points or fewer.

This season, Iowa has had eight games decided by the same number of points. The Hawkeyes have turned it around, though, putting up a 6-2 record — a polar opposite of last season’s disappointing finishes.

The Daily Iowan breaks down each of those eight games this season, pinpointing the key moments in each contest.

Iowa made just four field goals in the second half, but its biggest shot from the floor came with 3:35 left in the game. Garza’s 3-pointer in the face of Oregon’s Bol Bol boosted the Hawkeye lead from single digits to 11 points, and the Hawkeyes took care of the rest from the free-throw line (11-for-12 from the stripe after Garza’s triple).

Baer scored 16 points off the bench, but his efforts from the 3-point line catapulted Iowa in the second half. He scored 11 points (three 3-pointers and a pair of free throws) in a three-minute span, during which the teams traded buckets. Later, with 40 seconds remaining, Baer drained the game-winning free throw.

Iowa’s Joe Wieskamp hit a floater while getting fouled, and his free throw put Iowa on top, 61-60, with just over three minutes left in the game. But then, with 1:35 left, Wisconsin’s Ethan Happ kicked the ball out to Brevin Prtizl, who was wide open outside the 3-point arc. His go-ahead shot put Wisconsin on top for good.

Iowa’s offense and defense wasn’t spectacular by any means, but in the game’s final two minutes of action, Bryant scored just 1 point, missed all six of its field-goal attempts, and turned the ball over once.

Down by 1 with just over two minutes remaining, Iowa missed two of four free throws. With the clock winding down, Jordan Bohannon launched a 3-pointer nearly touching the half-court logo, and his dagger sent Iowa back home with a win. The shot marked the first big triple of his clutch 2019 campaign.

Losing by 4 points in the final minute of a game in which Iowa somehow had a fighting chance to win down the stretch, Tyler Cook grabbed a Minnesota miss and took it coast-to-coast. Instead of a quick bucket — one that would have made it a single-possession game — Cook turned the ball over. In no way was this loss Cook’s fault, though. Iowa gave up 55 first-half points.

Key moment: Bohannon’s two 3s in under a minute.

Indiana came back in a fury, narrowing Iowa’s lead to just 3 points in the final two minutes. With a double team closing in on Cook, he fired a pass to Bohannon, who sat alone along the 3-point wing. He drained the triple, shushing the Hoosier crowd. Then, roughly 50 seconds later, Bohannon drilled a leaning 3-pointer well beyond the 3-point range.

Bohannon’s game-winner made its way all across social media, and rightfully so; the junior’s 3-pointer with under a second remaining (0.6) capped Iowa’s 15-point comeback to win its third conference game in a row.