Java House is hosting a podcast and a comedy open mic in an effort to bring culture and community into the cafe. 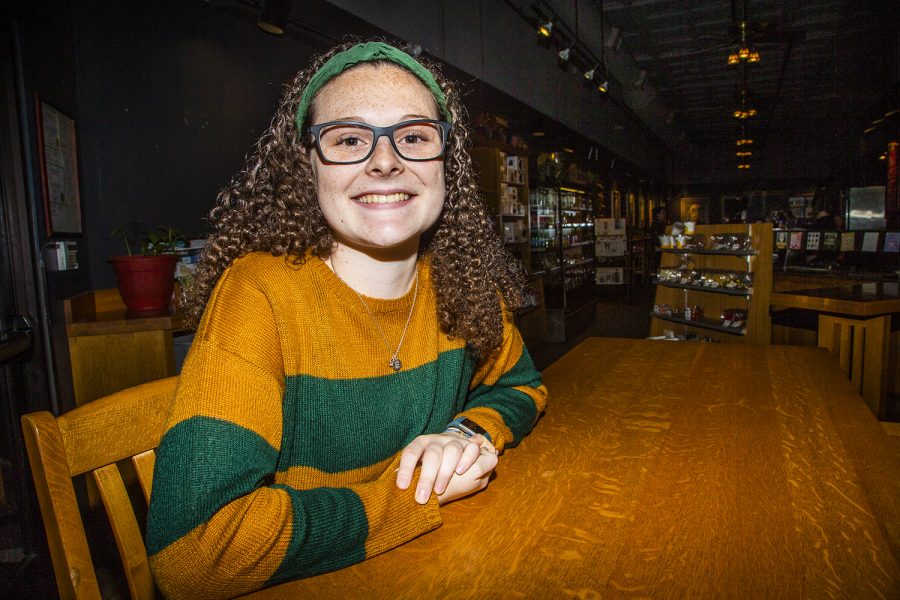 UI junior Ella McDonald poses for a portrait at Java House on Monday, February 11, 2019. McDonald started the "Half Caff" podcast with coworker Jack Berning about living the life of a barista. (Katina Zentz/The Daily Iowan)

Downtown’s Java House is creating new forms of entertainment to reach all types of customers.

The Java House will begin hosting its own podcast as well as an open mic for writers, musicians, and comedians this week as part of an effort to bring culture into the cafe.

As of Sunday, Java House began hosting a new podcast from two of its baristas.

The podcast, called “Half Caff,” is a light-hearted, coffee-theme show in which listeners can get a glimpse into the life of a barista.

Podcast host and University of Iowa student Jack Berning said he hopes the weekly show brings light into the lives of its listeners.

“Honestly, I hope [listeners]  get a little bit of a good chuckle and just an escape from their normal day,” he said. “It’s light listening. We just kind of want to give people a little 20- or 30-minute break in the middle of a stressful college day.”

Berning said that he enjoys applying the specific language of a barista to the general public.

“Doing the podcast is cool because coffee is kind of a niche culture, and I like using the sort of mundane things we talk about every day at our work and then trying to cater that to the general audience,” he said.

UI junior Ella McDonald, a barista at the Java House, said the idea for the podcast came from months of workplace banter.

“[The podcast] shows our daily lives down here at the Java House,” McDonald said. “You get to hear us steaming the milk and pulling the shots.”

The podcast is recorded live at the Java House every Sunday and posted to SoundCloud on Monday.

Current segments in the show include drink-theme horoscopes and quizzes. McDonald said creating these bits is her favorite part of the podcast, which consists equally of casual improvisation and planned topics.

“Each week, we’re going to try to think of a new segment, and go off there, and just keep the ball rolling,” McDonald said. “It’s for everybody.”

In addition, Java House is also planning to begin an open-mic night. Brandon Reimers, the Java House retail operations manager, said the idea was something that the staff was excited about, and it has been in the works since mid-January.

“I came up with the idea with a few of the staff. They came to me with some ideas to get the community involved in and around Iowa City, so I kind of just ran with it,” Reimers said.  “I hope to provide not only the performers with a great space to perform but for the community to come and not only enjoy comedy but a great performance.”

While the open mic is only taking place at the downtown location for now, Reimers said he hopes to expand to other Java House shops.

“People who don’t really enjoy the bar scene can come to our store and enjoy [trivia night],” Reimers said.