The 2020 delegate selection plan proposal for Iowa Democrats was released Monday and aims to make the caucuses more accessible. 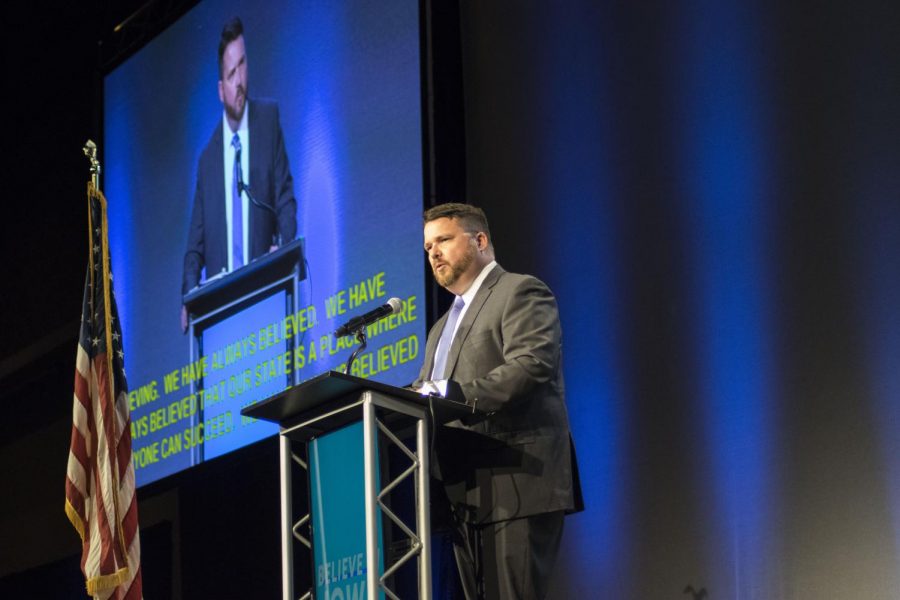 Troy Price speaks at the Democratic Gala on Saturday, October 6, 2018. He is the Chair of the Iowa Democratic Party.

Democratic caucus-goers could face a different caucus experience come 2020 in the first-in-the-nation Iowa caucuses as the Iowa Democratic Party announced on Monday a proposal for a virtual-caucus system.

The virtual-caucus system would include six different times to vote in the days preceding the Feb. 3 caucuses. Price said the virtual caucus will allow for Iowans who are not able to make it to their precinct at the specified time and location to caucus over the phone or through a smart device.

After the virtual caucuses are completed, the votes will be aggregated by U.S. congressional districts and in essence will be treated as an additional county with 10 percent of delegates assigned, Price said. He added that delegate assignment will stay the same for in-person caucusing.

Another piece to the newly proposed delegate-selection plan includes recording the first expression of preference and having a recount procedure. As per the proposal, in-person caucus-goers will be given a preference card that they would fill out with their name and the name of their preferred candidate.

If the candidate does not reach the viability threshold of 15 percent of attendees, caucus-goers who expressed preference will be given a new card. Virtual caucus-goers will rank their top-five candidates.

“The virtual caucus is a separate process from the precinct caucus and will not have an impact on the results coming out of the precinct caucuses,” Price said. “Through this additional process, we are going to be able to give more Iowans a chance to [participate] in this process.”

Traditionally, Iowa has only published the state-delegate equivalent, which is the estimated number of delegates a candidate would earn at the party’s state convention. With the proposed plan, raw counts would also be published. After that information is collected, campaigns could also request a recount within 72 hours if they believe that would change the result of the caucus.

The changes come after months of listening sessions and online feedback from Iowa caucus-goers, meetings with political scientists, and discussions with other early states and the Democratic National Committee.

In a previous interview with The Daily Iowan, Iowa Democratic Party Executive Director Kevin Geiken said the party would begin training precinct captains and educating potential caucus-goers once the new year begins. Price said not much has been decided in terms of the education program’s implementation.

“First, we wanted in essence to build the frame, and then over the coming months, we’ll be putting the rest of the house together,” Price said.

While Iowa Democratic Party leaders expect the 2020 caucuses to be well-attended, Geiken previously told the DI it will be difficult to determine the cause.

“It’ll be hard to separate out what the increased participation is resulting from — different rules that allow more participation versus just having a whole heck of a lot of candidates who are going to be encouraging people to show up,” Geiken told the DI in November.

As of now, the Republican nomination process is a one-man show with President Trump facing no challengers. University of Iowa political-science Associate Professor Timothy Hagle previously told DI that the Republican caucuses will still take place.

“There’s a lot of party business that takes place even if you’re not worried about candidates,” Hagle said.

Looking forward, the Iowa Democratic Party will begin its 30-day public comment period on the proposed delegate-selection plan. Once that period is over, the party will look at the feedback and make changes to the plan if necessary.