Iowans react to Trump’s state of the union address

Iowa officials and Iowa City-area Democrats and Republicans look ahead to a lawmaking session in Washington, D.C. 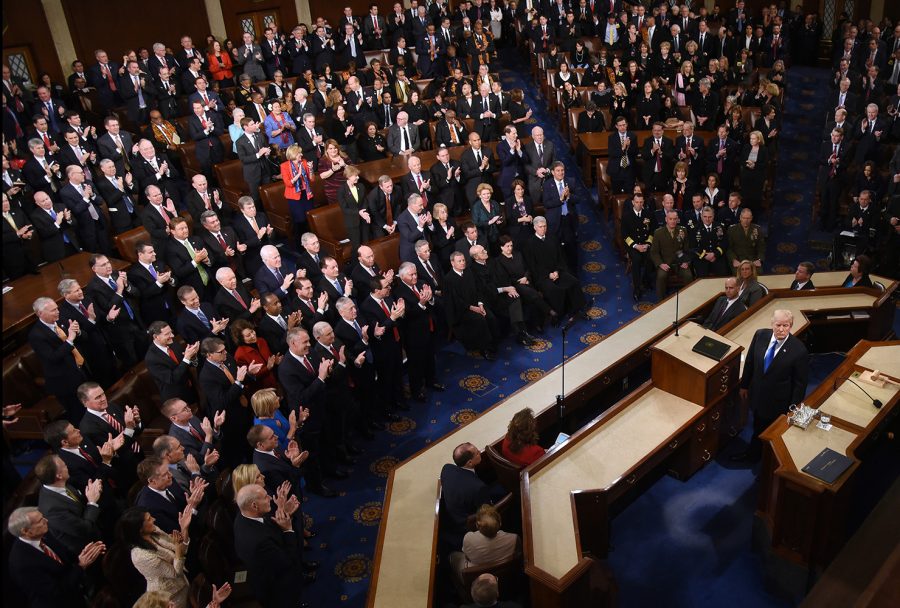 President Donald Trump delivers his first State of the Union address before a joint session of Congress on Capitol Hill in Washington, D.C., on January 30, 2018. (Olivier Douliery/Abaca Press/TNS

Iowa City Democrats and Republicans gathered on Tuesday in two separate events to watch President Donald Trump deliver his second State of the Union Address on the heels of the longest government shutdown in U.S. history.

Trump’s address was moved back from its original date by Speaker of the House Nancy Pelosi, D-Calif., because of the most recent government shutdown. The longest shutdown in U.S. history ended on the evening of Jan. 22 with a three-week continuing resolution that could result in another shutdown if Congress cannot pass a spending bill by Feb. 15.

The overarching theme of Trump’s address was unity between the parties.

“The agenda I will lay out this evening is not a Republican agenda or Democrat agenda, it is the agenda of the American people,” Trump said as he began his remarks.

President of the University of Iowa College Republicans Kyle Apple said he liked the theme of unity, and he only noticed a few divisive issues in Trump’s address: abortion and border security.

“I am hopeful that we can get some bipartisan conversation and compromise going on the immigration-reform issue,” he said.

Strengthening security at the Mexico/U.S. border was a campaign promise of Trump’s and the issue at the head of the most recent government shutdown.

During the address, Trump touted his achievements in office including the Tax Cut and Jobs Act passed in December 2017, rolling back the individual mandate under the Affordable Care Act, and other government regulations.

Student Republicans gathered in Schaeffer Hall for an event hosted by the UI College Republicans. An occasional laugh and a few students applauding and chatting were heard during the address, which was projected on a screen.

Just a mile to the south, Democrats hosted a sparsely attended watch party for the Democratic response to the State of the Union at Big Grove Brewery. The event was sponsored by Fair Fight Action, an organization founded by Stacey Abrams, who lost in Georgia’s gubernatorial election in 2018. Abrams is the first African American woman to give a Democratic response to a State of the Union.

“I just hope that Iowans really tune in and see the type of really free and thoughtful leader Stacey is,” said Quentin Misiag, who organized the watch party. “And I think this will not be the last time we hear from her, especially here in Iowa.”

Misiag said he believes Trump’s priorities do not align with Iowa’s.

During her remarks, Abrams responded to Trump’s call for unity by noting it was Trump’s unwavering stance on immigration that led to the shutdown.

“The shutdown was a stunt, engineered by the president of the United States, one that defied every tenet of fairness and abandoned not just our people but our values,” Abrams said.

Iowa officials also weighed in on Trump’s address as well.

“I appreciate President Trump using his State of the Union Address to discuss the importance of free and fair trade,” Reynolds said in a prepared statement.

Farmers whom The Daily Iowan talked with said the renegotiated agreement would not offset costs incurred from tariffs — that is, if the agreement is ratified by all three countries’ legislative branches.