The 10-Minute Play festival this weekend features a variety of undergraduate plays, from comedic pieces to roasts of the theater department. 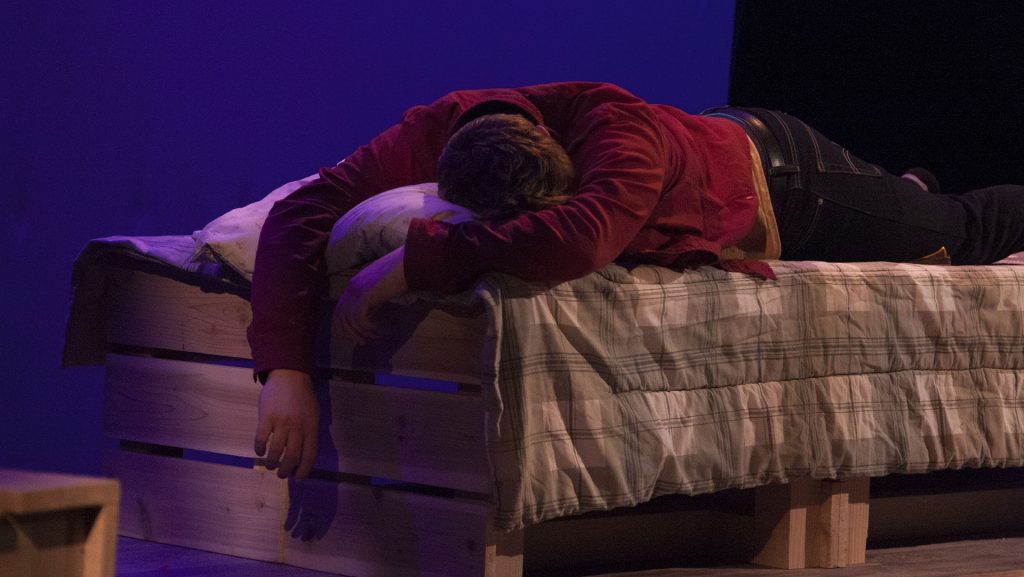 Actors prepare to set the scene for Busted, a play written by Jason Grobstich during a dress rehearsal for the 10-minute plays. The 10-minute plays feature a variety of student playwrights and actors as they perform short sequences of plays.

UI undergrads, prepare for your 10 minutes of fame.

Starting Feb. 7, the University of Iowa Theater Department will present the 22nd-annual 10-Minute Play Festival. The performances will première eight original plays written by UI undergrad students at 8 p.m. on Feb. 7, 8, and 9, at 2 p.m. on Feb. 10. There are also readings of six more plays at 2 p.m. Feb. 9. Readings and performances will be held in Theater B; admission is free.

UI junior Brigid Martin, who wrote the play “Ellis Wright Goes to Hell,” had the idea for it last spring and began writing in September 2018.

“My play is about a young boy who goes to Hell to find his mom, who’s a demon. It’s about finding family in unlikely places. It’s very cute, very funny,” she said. “I drew a lot of inspiration from actors I’ve seen who work in the department. It’s a really tight community, which makes it easy to get to know people.”

This is Martin’s second year with the festival, last year in the reading series. This year, she has sat in on the rehearsals as a part of the main festival.

“I’ve gotten to change things and see how the actors provide more depth to what I write, which is really awesome,” she said. “It’s really incredible to see characters you wrote come to life and listen to your words come out of someone else’s mouth rather than your own mind. There’s been a couple of times when [the actors] said something or omitted a word, and I actually like that better, so we end up changing it in the script.”

Martin said that collaborating with the actors and director is important when it comes to improving a play.

“It’s really nice to have a second opinion on it. There are times where [the director] has an idea, and I don’t really know if that’ll work, and sometimes, I’m like, ‘OK, that was a good idea,’ ” she said. “It’s interesting being a playwright because it’s your script, but at the same time, it’s not anymore. You get the words, but it’s the actors and director who get everything else and make it what it is. You have to let that go and not be stuck with the idea that you had while writing it. You have to allow it to become its own thing.”

On the other hand, junior Cameron Speta has not been too heavily involved with the play “3 Students” since submitting it in November.

“After [my play] was selected and cast, I handed it mostly over to my director. I answer questions sometimes, but there haven’t really been that many,” they said. “I’m not usually in the room during rehearsal. I trust my director; she knows what she’s doing, and we talked about the script before we went into rehearsals.”

The production, Speta said, is much more elaborate than high-school festivals.

“There were ground plans and lights plots by real scenic and lighting designers, and that was, like, Whoa, it’s real, it’s actually happening. I’m gonna be very excited to go and see it,” they said. “The first two years I got rejected, I took it a little hard, but I think each time I’ve submitted something, it’s been better and better. It happened this time, and I’m very proud of the fact that I was able to get something accepted.”

Speta said that when they came up for the idea of the play, the writing took only an hour. Then they workshopped it around with friends for a month.

“[My play] is pretty out there. One of the characters dabs on stage. I did write that into the stage directions, and that’s one of the few points I will stand firm on. You can’t take that out or change it,” they said. “It’s a lot of inside baseball for the Theater Department. It’s basically about these three students who hate the amount of Chekov that gets assigned in the Theater Department, so it’s basically putting the department on blast for 10 minutes. It’s kind of absurd.”

Third-year student Ashlynn Dale recently transferred to the UI, and this is her second year being a part of the festival. She said her play, “Doolemma,” might be a bit shocking.

“I didn’t realize this when I was writing it, but I guess I would consider it a feminist play,” she said. “It brings up things that aren’t expected of women and that women don’t talk about. People laugh when guys are gross, but when girls are gross, people don’t like that. It also speaks volumes about the expectation of women and what we are and aren’t allowed to talk about and how we are and aren’t allowed to express ourselves.”

Despite the serious message of the play, “Doolemma” also has a comedic tone.

Dale said that she took inspiration for her play from experience.

“A lot of women go through awkward bathroom situation, and I’m sure men do, too, but I feel like women have to be closed off about it,” she said. “They’re supposed to be prim, and proper, and elegant — that’s the expectation. In my play, these women are allowed to be gross or different from the expectation of women. I’m not afraid to talk about it.”

In addition to writing, Dale directs her play, as opposed to last year. She said she is glad she has control because she knows what she wants.

“I really like directing. It’s been really great to work with the women,” she said. “I did a lot of movement exercises to get them into their bodies so that they could play around with framing themselves. They’ve been so willing to try wild things, but to put it in front of an audience and be truthful and vulnerable that way is difficult, especially as a woman.”

Once the directors and writers finish their work, there is nothing left for them to do. At that point, it is up to those on stage to complete their vision.

“Once it’s on stage, it’s not in my hands anymore, it’s in the actors’ hands, so I just have to step back and experience, which is really fulfilling,” Dale said. “But it can be scary, because it’s something that came from my brain and put up for people to see, and that’s intimidating sometimes. It’s weird to think that I created those words that are being said and being portrayed to the audience.”