Cole McDonald is the latest Friday night pitcher for the Hawkeyes, and he’s up for the challenge. 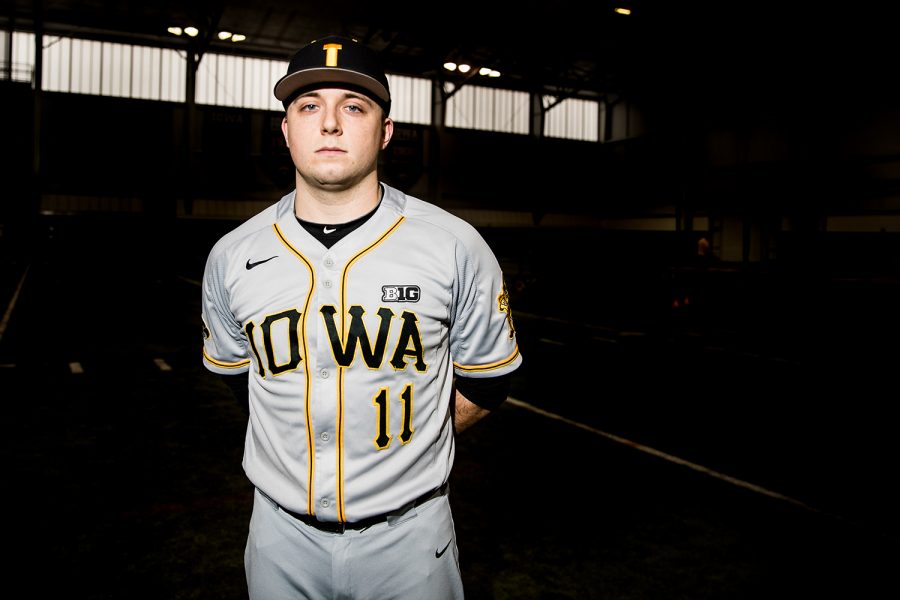 Iowa Baseball Cole Mcdonald #11 poses for a portrait at the Iowa football practice facility on Febuarary 5, 2018.

The Iowa baseball team saw many familiar faces depart for the major leagues and graduation this past offseason, and one of those Hawkeyes was pitcher Nick Allgeyer.

The Friday night starter threw a 2.41 ERA in his 15 starts, and he came just 5 strikeouts short of the century mark (95).

“Basically, everything I’ve done since I’ve been here has been to be the Friday night starter,” McDonald said.

He said head coach Rick Heller never formally announced his job as the Hawkeyes go-to pitcher to start weekend series — it was an assumed role, thanks to his efforts last year and being one of the Hawkeyes’ top returnees.

“It’s important that your Friday night guy gives you a chance to win, start the series off each week, and I don’t think any of us have any doubts that Cole won’t do that,” Heller said. “He’s worked as hard as he ever has, which is as hard as anybody we’ve ever had. He’s ready to go. He’s in great shape, he’s been throwing extremely well in our simulated games.”

This offseason, McDonald said, he focused on adding more weight in an effort to increase his velocity while holding his average.

“My goal is to be more efficient with my pitches,” the New Hampton native said. “I’m trying to get more to the seventh inning more efficiently or more consistently, or to the eighth inning, as opposed to just going five or six innings like I did last year. I’m trying to go farther into games with the same number of pitches.”

Last season, McDonald had a 3-2 record, appearing in 11 games and pitching 55.2 innings. He gave up the fewest runs (27) among Iowa’s three weekend starters. He also finished second among the starters with a 3.23 ERA, right behind Allgeyer.

McDonald pointed to Allgeyer, who he described as a “bulldog on the mound,” as a major influence in the way he’s conducted himself heading into his Friday role.

“He had great confidence in himself, and I would work out with him all the time. I definitely think that rubbed off on me,” McDonald said. “I’m incredibly thankful to have a teammate like him — he definitely helped put me in the position I am now to have success this season.”

Especially during the past two seasons, the Hawkeye pitching tree remained ripe with wisdom, and that’s something McDonald wants to see continue this season.

“There are guys who come to me a lot,” McDonald said. “I feel like it’s my responsibility to help out the players younger than I am, because when I was younger, I had guys like Gallagher, Allgeyer, Eldred. Those are the type of guys that helped me out, so it’s only fitting that I help the younger guys out and tell them the things I’ve learned since I’ve been here. When they’re older, they can do the same thing. That’s how we all get better.”

McDonald and the rest of the Hawkeyes will start the season on Feb. 15, opening against George Mason in the Diamond 9 Sunshine State Classic Series in Kissimmee, Florida.