Ryan Kriener’s spike in production in his third season is no fluke — he is a key piece in Iowa’s arsenal. 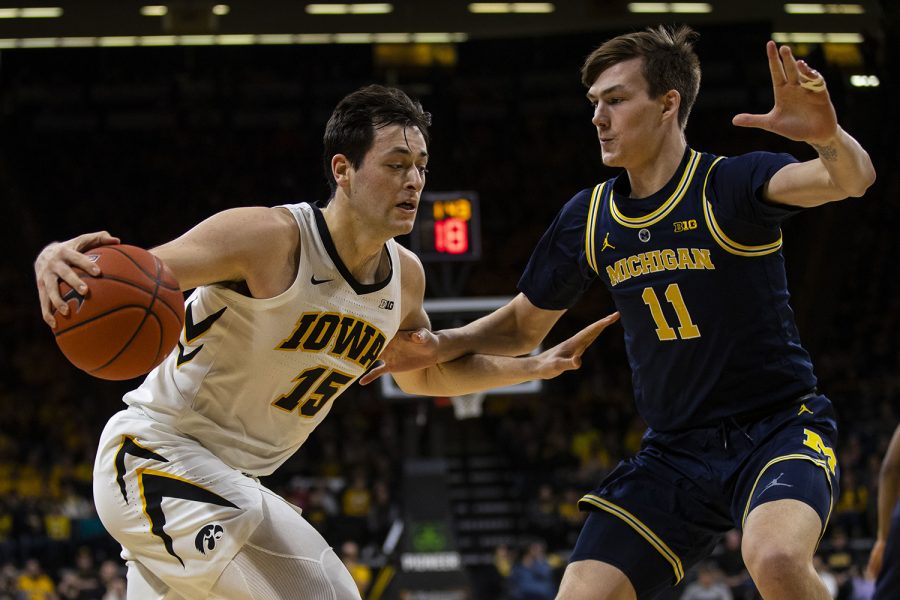 Iowa forward Ryan Kriener drives to the hoop during the Iowa/Michigan men's basketball game at Carver-Hawkeye Arena on Friday, February 1, 2019. The Hawkeyes took down the No. 5 ranked Wolverines, 74-59.

Fewer than seven minutes into Iowa’s 74-59 upset win against No. 5 Michigan on Feb. 1, forward Luka Garza picked up his second foul, forcing him to head to the bench.

A few minutes later, with Iowa down by 3, Kriener set a screen, moved without the ball, and camped outside the 3-point arc. The Hawkeyes flipped him the ball, and Kriener knocked down his first shot of the game, tying the contest.

“Whenever you see that first shot go in, your confidence skyrockets,” Kriener said. “You hit your first 3, and that means they’ve got to respect you a lot more on the perimeter, and that opens up your driving game.”

That would be a theme all game long, as Kriener continued to make his mark offensively as well as lock down an Iowa defense that held Michigan to its third-lowest scoring output of the season.

Kriener has gone from a player who can potentially make an impact off the bench here and there to a forward who can change the outcome of games.

In the Hawkeyes’ biggest win since taking down No. 1 Michigan State in 2015, Kriener tallied his first career double-double. He scored 15 points off the bench and grabbed a career-best 10 rebounds.

RELATED: Wieskamp bounces back in Iowa’s signature win over No. 5 Michigan

“Ryan did a terrific job of stepping up and being that guy,” Garza said. “He helped us so much. His scoring, his rebounding, his defending — he did a lot of good things for us. It’s always satisfying to know when you go to the bench for fouls, you’ve got someone who can come off the bench, and help, and do great things.”

Throw in an assist and a perfect 1-for-1 from behind the 3-point arc, and Hawkeye fans got a glimpse at just how dynamic the Spirit Lake native can be.

“He was phenomenally important,” Iowa head coach Fran McCaffery said after the game. “But he is that every game. We need him. It’s been exciting to watch him just continue to grow with his confidence. And getting a double-double against Michigan says a lot.”

“Confidence,” something both McCaffery and Kriener noted following the win, has boomed for the third-year Hawkeye. Kriener scored at least 10 points in six of Iowa’s 22 games this season (that’s good for more than one-fourth of the Hawkeyes’ contests). Iowa is 5-1 in those games as well.

Last season, Kriener’s first double-digit performance didn’t come till Feb. 21, and during that season he only managed two games with at least 10 points.

All across the board, his numbers are up from Year 2 to 3 — a sign that growing confidence can lead to on-court improvement.

Kriener’s points and rebounds per game have increased since last season, his field-goal percentage has jumped more than 1 percent, and his 3-point percentage is double his 2017-18 output.

Granted, Kriener’s minutes have increased from 10.4 last season to 13.9 this year, but he’s made the most of his time on the court and demonstrated he’s one of the Hawkeyes’ most underrated players.

The forward has the third-best box plus/minus (6.5) out of any Hawkeye with legitimate playing time (at least 300 minutes this season). That’s a higher rating than all of Iowa’s starters except Joe Wieskamp. He also holds the second-highest defensive plus/minus of Hawkeyes in the same minutes. Kriener also has the second-highest block percentage (3.6) out of Hawkeyes in that 300-minute group.

Overall, Iowa’s defense has improved since last season. The Hawkeyes have given up roughly 6 fewer points per game this season, and both overall field-goal percentage and 3-point percentage are down for opponents in the 2018-19 season.

It’s been a complete team effort to turn it around, but Kriener has played an integral part in Iowa’s resurgence.