According to the website GoAllOutdoors.com, Iowa is the worst state for winter recreation because of snowfall, public-land acreage, and other factors. 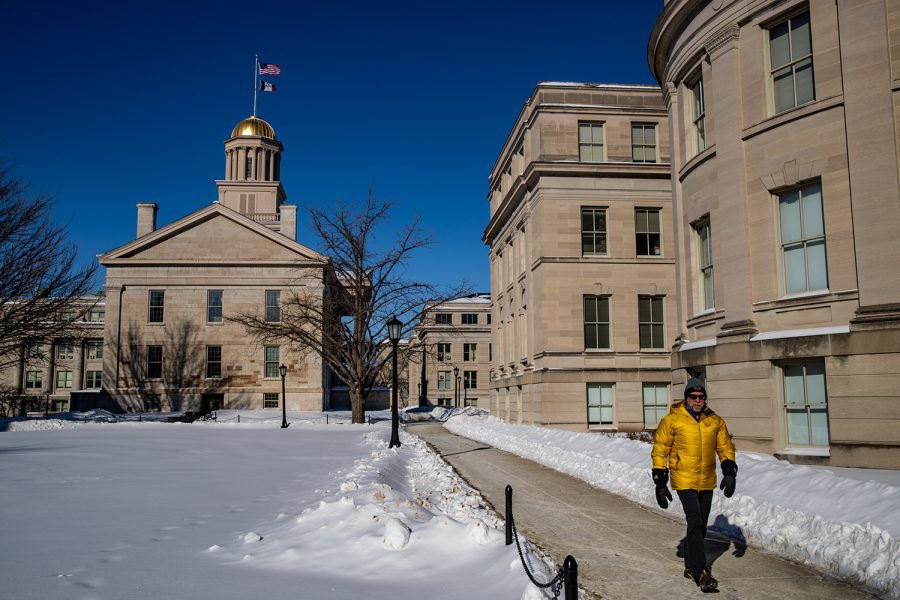 A pedestrian walks on the Pentacrest towards Washington street on Wednesday January 30, 2019.

Iowa has been ranked as the worst state for winter recreation, according to the website GoAllOutdoors.com.

The website, which provides people with information about outdoor activities and how to safely enjoy various forms of recreation, published a list of the best and worst states for wintertime activities. The rankings were judged on average annual snowfall, public-land acreage, square miles of water, average number of clear days, and presence of mountains.

Wyoming, Utah, and Colorado led the rankings; Iowa, Rhode Island, and Connecticut were the lowest ranked. Suggested outdoor activities in Iowa on the list included snowmobiling and cross-country skiing.

According to GoAllOutdoors Director of Communications Chris Smith, average temperatures didn’t affect a state’s ranking, but only states with average winter temperatures below freezing were included. With Iowa’s frigid temperatures in January, the conditions did not help the state’s rank.

“A larger average annual snowfall would have made Iowa rank higher on the list, because access to snow generally provides the opportunity for outdoor winter activities like skiing and snowshoeing,” Smith said.

Smith also noted that if Iowa had grown its federal public-land acreage and access to bodies of water, its ranking could have changed.

Juli Seydell Johnson, the director of Iowa City Parks & Recreation, said Iowa’s weather isn’t cold enough to have some of the outdoor activities that other cold-weather states might offer. Having lived in Minnesota for several years, Johnson said, Iowa is not consistently cold enough to offer outdoor skating or similar activities on a regular basis.

There is ice skating available at Terry Trueblood Recreation Area and City Park when the weather permits, but because of inconsistent temperatures, the locations are not currently open.

RELATED: Local cyclists share strategies for biking in the winter

Johnson said there are still opportunities for winter recreation in the Iowa City area, but people have to be willing to dress accordingly to be outside.

“Hiking, birdwatching, and riding bikes are still available to do, but it’s cold,” she said. “Without the proper gear or clothing, you just can’t do those things. Our parks and trails are open all winter, and so we do encourage people to go out and explore.”

On Feb. 10, the annual Freeze Fest will take place in Iowa City, which teaches basic recreation skills for winter sports. Johnson said this will help people learn how to ice-fish, cross-country ski, and other recreational skills, which may help how Iowa is perceived.

UI sophomore Megan Grunst, who is from Madison, Wisconsin, said she believes there is less to do in Iowa, and that can be frustrating for residents.

“I’m from Wisconsin, and there we have ski resorts, ice-fishing, trails, and other things,” Grunst said. “But Iowa doesn’t really have any of that.”