In the 25 years of Dance Marathon, the largest UI student organization has raised more than $27 million to fight pediatric cancer. 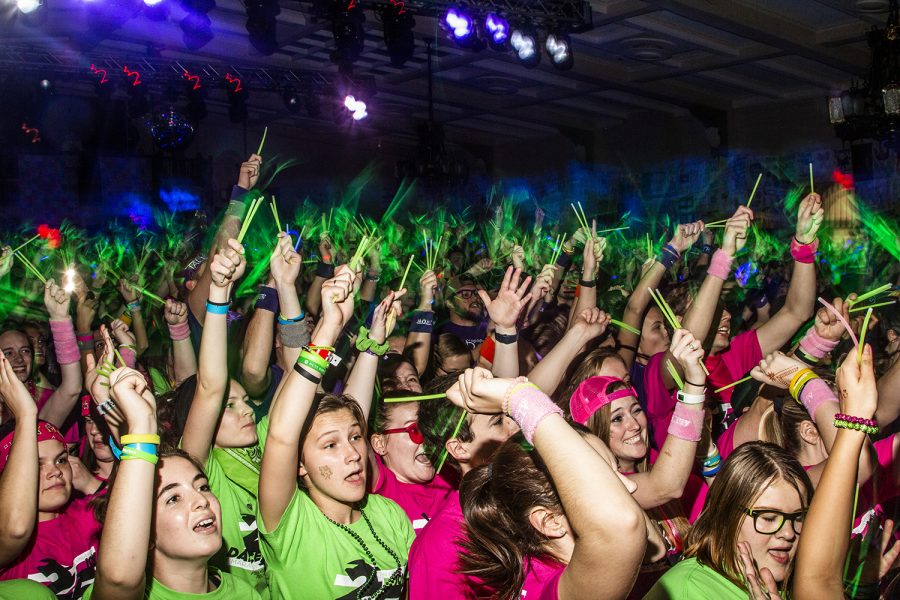 Dancers wave their glow sticks during Power Hour at Dance Marathon 25 at the IMU on Feb. 2.

The UI Dance Marathon on Feb. 1-2 celebrated 25 years of dedicating its time to pediatric cancer awareness. This past weekend, dancers, leadership, and the community were moved by the stories, songs, and remembrance of those who lost the battle.

UI Dance Marathon, the largest student organization on campus, encourages students, faculty, and staff to engage in a 24-hour on-one’s-feet event to raise money to support children with pediatric cancer and their families.

The 25th anniversary brought in slightly more than $2.96 million, the second highest total in the group’s history, right behind 2018’s more than $3 million.

Dance Marathon Executive Director Charlie Ellis said the total at the end of the 24 hours represented way more for the student organization, because it had a year’s worth of hard work and dedication from everyone involved.

“With fundraising for an organization like [Dance Marathon], you come across a unique line of people that believe ‘the year can be defined by a number,’ ” Ellis said. “We know we are doing so much more than just raising money to affect the families and need to look past the fundraising point, whether it was exponentially above or below. [Dance Marathon] is doing so much for the kiddos and their smiles.”

In all 25 years of UI Dance Marathon, the organization has raised more than $27.5 million.

Participants were motivated through new additions to this year’s Big Event, such as additional accessibility goals, a new campaign called Shape Your Impact, and new leadership positions focused on various parts of the organization.

Public Relations Chair Lilly Boenker said a lot of the changes this year with accessibility were focused on the mental and physical health of the dancers.

“I just think it’s really important that this year they put a lot of emphasis on self-care and mental health, as someone who suffers from mental illness myself,” she said.

Shape Your Impact was used throughout the year to motivate participants to define their effect in the organization and take an active role.

“However their impact may look, they can shape it beyond belief,” Ellis said. “No matter what shape it may be, we want you to shape your impact harder than before.”

Many changes for the 25th anniversary derive from the new positions, such as the outreach director and campus-relations director.

Campus-Relations Director Sierra Jones said the committee missions are to bring in more student organizations to collaborate with Dance Marathon.

“Moving forward, I see [Dance Marathon] a bigger part of what it means to be a Hawkeye,” she said.

This year’s anniversary kept many of the previous years’ traditions alive with the famous haircuts for donation, “kiddo” graduation, and “Dancing In Our Hearts” video to commemorate the 235 children who are no longer alive.

The many who received haircuts For The Kids included Hawkeye football players Landan and Levi Paulsen.

Dance Marathon lime captain Natalie Paulson said the energy the graduation brought to all of the dancers will stick with her.

“When you go through the entire 24 hours — even more for leadership — and you see the fact that you have helped those kids is truly amazing,” she said. “No matter how big or how small, the fact that you get to see it in person provokes an emotion in you that is so overwhelming that you can’t even put it into words.”

For more photos of the Big Event, go to page 6 or dailyiowan.com.