Dancers lip-sync battle it out at Dance Marathon

UI Dance Marathon featured a lip-sync battle for attendees. There were three rounds of battles and four contestants. 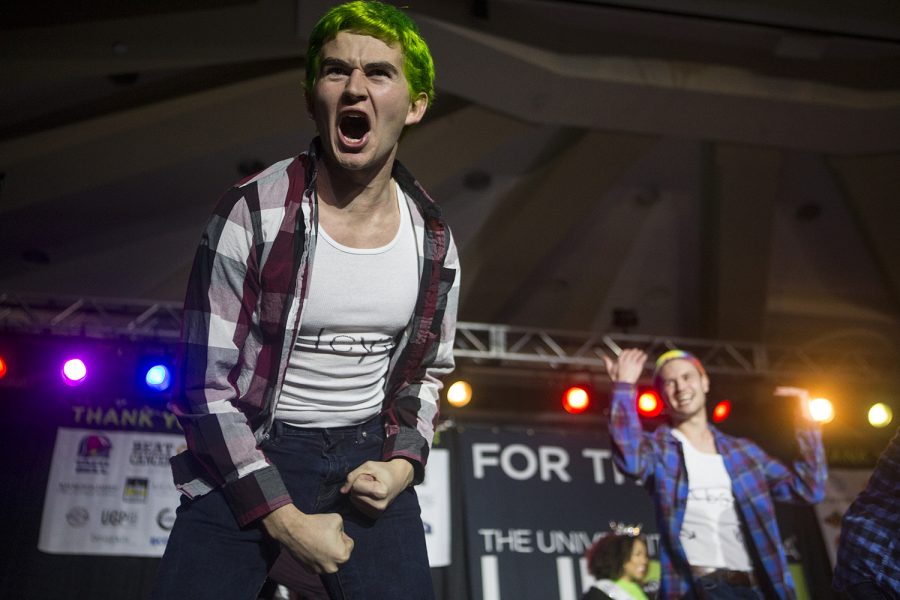 The Men of Morale perform in the lip synch battle during Dance Marathon 25 at the Iowa Memorial Union on Friday Feb 1, 2019.

University of Iowa students battled it out at the 25th anniversary of Dance Marathon early Saturday morning with a lip-sync battle that would rival any real performance.

The lip-sync battle, held in the IMU Main Lounge, was one of the many events offered to participants at Dance Marathon’s Big Event. The battle began at 1 a.m. as four groups lip-synced in three rounds of battles which were judged based on the amount of cheers from the crowd.

The first round was between a solo artist named Caesar and an all-female duo called the Women of Morale. Caesar began the battle with his rendition of “Baby” by Justin Bieber, and Women of Morale sang “The Hoedown Throwdown” by Miley Cyrus.

Caesar started the battle and had the whole crowd dancing and singing along with him. He even had Bieber’s signature hairstyle and flat bill hat.

UI junior Paige Olin was in attendance at the lip-sync battle, and said she enjoyed the songs contestants selected, especially Justin Bieber.

“I thought it was hilarious that the guy dressed up as Justin Bieber, because I used to be a huge Justin Bieber fan,” she said. “When he was standing there, I literally thought he looked like Justin Bieber.”

At the end of round one, Women of Morale won over the Caesar and advanced to the next round.

The second round of battle was between two all-male groups, Men of Morale and Men of Events.

Men of Events had the crowd on its feet with a performance of “Boyfriend” by Big Time Rush. UI sophomores Grace Rush, Carly Rossdeutcher, and Meredith Russell all said this was their favorite performance of the night.

“We’re all big fans of Big Time Rush, so we’re really glad they did the song ‘Boyfriend,’ ” Rossdeutcher said. “We enjoyed the throwback they picked.”

Up against Men of Morale, Men of Events performed the Mean Girls version of “Jingle Bell Rock.” Staying true to the movie, the group even cut the music so the crowd could sing along instead of having the recording.

Men of Morale’s imitation of Big Time Rush won over Men of Events’ “Jingle Bell Rock” and advanced them to the final round against women of morale.

Women of Morale began the final round of the battle with “What Dreams Are Made Of,” a well-known song from The Lizzie McGuire Movie. Men of Morale followed up with a performance of “Live While We’re Young” by One Direction that had the crowd on its feet.

In the end, Men of Morale took the main prize and was crowned on stage by Miss Iowa, Mikhayla Hughes-Shaw. Hughes-Shaw attended Dance Marathon as part of Miss America’s work with Children’s Miracle Network. She thanked all the dancers in attendance and commended them on their efforts and fundraising.

Students at the lip-sync battle also said there were other events throughout the night that helped them stay awake in the 24-hour event.

UI junior Bailey Boyer said there are a lot of things to do to stay awake during the Big Event, such as henna tattooing, a silent disco, and other activities.

UI sophomore Meredith Russell also said she visited other activities throughout the night.

Dancers stayed in the ballroom even after all three rounds had ended to dance and sing along to the music playing on the speakers.

“It’s for the kids,” Rossdeutcher said.