After 25 years of the UI holding Dance Marathon, the organization has raised over $27 million. 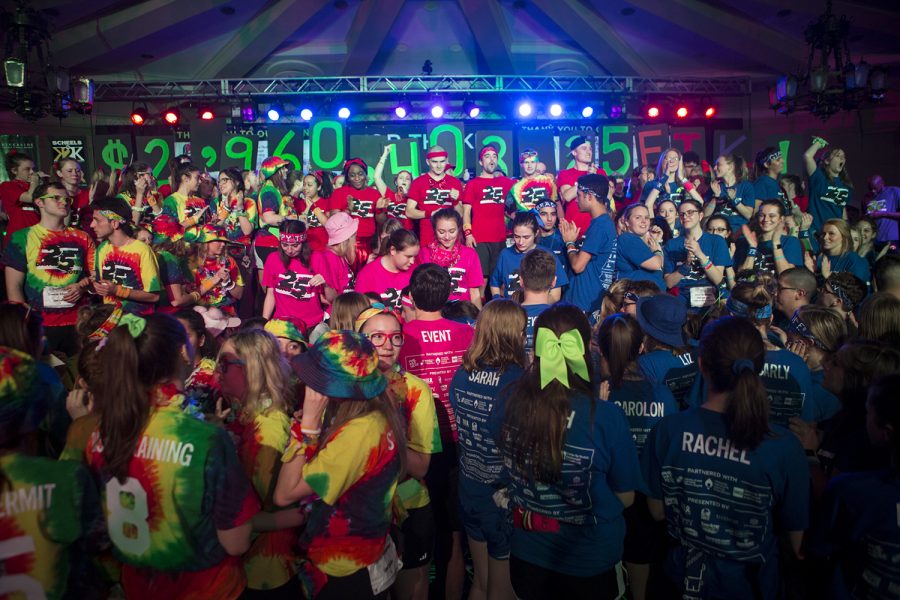 The final fundraising total is revealed during Dance Marathon 25 at the IMU on Feb. 2. The Big Event raised slightly more than $2.96 million. (Alyson Kuennen/The Daily Iowan)

After 24 long hours of dancing, chanting, and commemorating those who have lost their battle to cancer, the 25th anniversary of the University of Iowa Dance Marathon raised its tote boards to reveal $2,960,403.25 had been raised “for the kids.”

The total falls a bit short of last year’s record-breaking total for the student organization; it raised slightly more than $3 million.

In the 25 years of Dance Marathon, the largest student organization at the UI has raised more than $27.5 million.

Ellis said the total at the end of the night stood for so much more rather than merely money for him and all of the executive team.

“With fundraising for an organization as [Dance Marathon], you come across a unique line of people who believe ‘the year can be defined by a number,’ ” Ellis said. “We know we are doing so much more than just raising money to impact the families and need to look past the fundraising point, whether it was exponentially above or below. [Dance Marathon] is doing so much for the kiddos and their smiles.”

UI President Bruce Harreld and @BlacknGoldVP have a message for the UI community after Dance Maraton 25 raised $2.96 million For The Kids: “This is all about Hawkeyes helping Hawkeyes.” pic.twitter.com/yPOfGzVSQa

This year, Dance Marathon developed its first campaign, Shape Your Impact, to encourage all of leadership, dancers, and community members to define their effect on the organization and make the most out of their time in the organization.

Marissa Kronfeld, a fourth-year dancer on Dance Marathon leadership with the business committee, said she owes a lot of her dedication to fundraising to the families the organization affects.

“I think fundraising is important, because you really get to understand the impact that it has on each dancer group’s families,” Kronfeld said. “Something that they try to do with all the dancers is that $1 would give a family this, or $3 goes to that. We really try to break it down for the dancers so that the little amounts are shown to truly add up to make the lives better of these families. I think that really helps members understand their impact in the organization.”

Twenty-five years ago, the first UI Dance Marathon raised $31,000 to support 26 families. Since then, the group has supported hundreds of families and donated millions of dollars for research and improvements at the Stead Family Children’s Hospital.

Reilly Flair, the Group 26 morale captain, said becoming a morale captain was important to her to show her dancer group why fundraising is a large part of the Big Event.

“Fundraising is a large part of Dance Marathon, because without the money that we raise, we would not be able to provide the emotional support and many of the resources families need to get through these difficult times,” Flair said.

Dance Marathon continues to support families who continue their journey through a smaller version of the Big Event at the Stead Hospital. The organization also continues to remember those who have lost their battle through Dancing in Our Hearts, a portion of the Big Event that commemorates the 235 children involved with Dance Marathon who have passed away from cancer.

First-year dancer Rachel Tandy said fundraising to get to the Big Event for her first time was one of the coolest things she has done.

“I realized today that Dance Marathon is so important to me because of how much we have helped out not only the kids at the Children’s Hospital but also their families,” she said. “It warms my heart to see that.”