After 25 years, Dance Marathon has continued to see growth in numbers of participants as well as in donations received for the children in the hospital. 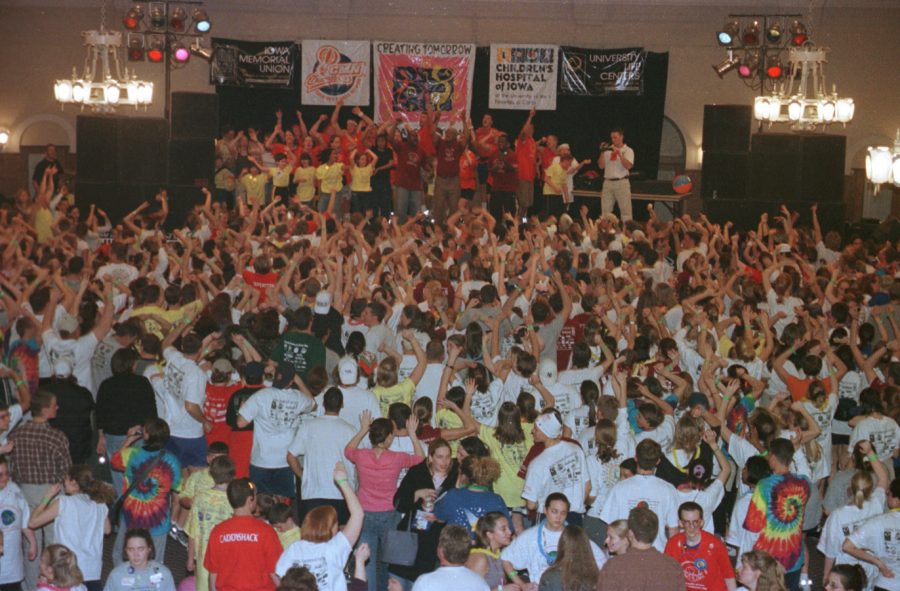 Dancin' the night away at Dance Marathon 2000.

University of Iowa students have packed themselves into the IMU Main Lounge to dance their hearts out “for the kids” each year for the last 25 years.

After four years of involvement, UI Dance Marathon adviser Tracey Pritchard has seen the organization grow and change every year, she said in an email to The Daily Iowan. The group has seen more dancers participating, more donations, and more community and corporate partners, she said.

The Dance Marathon leadership creates a new vision each year, allowing it to continue to grow and achieve new things, Pritchard said.

When she started working with Dance Marathon, Pritchard said, she didn’t expect the organization to change her as much as it did.

“I encourage others to get involved in whatever way they can, because every single individual can make a positive change,” she said. “Our families battling pediatric cancer at the hospital need us, and it never ceases to amaze me what one person can do to change the life of a child.”

Take a look back at Dance Marathon through the years:

After seven years of being involved with Dance Marathon, UI Dance Marathon adviser Brock Cavett said the support for the organization from the families involved has continued to grow. New family events have been created and more fundraising events occur than in the past, he said.

“I just feel like there’s been such a movement nationwide,” he said. “So not only is UI Dance Marathon big, but dance marathons across the country continue to grow and get support.”

This year, Cavett said, the organization has worked with alumni from the past 25 years to highlight the group’s milestones. Officials have looked at where Dance Marathon has been in the past and how that’s made it a successful organization, he said.

When Executive Director Charlie Ellis started with Dance Marathon, the organizers were focused on reaching the dollar-amount goal, he said. Now, they focus less on having a goal to reach and more on raising as much money as they can for the families.

This year through the “Shape Your Impact” campaign, Dance Marathon wants people to know that no matter how large or small, the action is, people can make a difference, Ellis said.

“Obviously with Dance Marathon, there can be a lot of sadness, there can be a lot of tragedy, misfortune, whatever you may come across, but also, watching 3,000 college students band together to fight for somebody they don’t even know is something that really gives me hope for this future generations,” he said.

Since her sophomore year of high school in 2009, Sara Petersen, a child-life-event specialist at Stead Hospital, has participated in Dance Marathon. And since then, she’s seen the hospital construction finish and now sees the organization’s work from inside the hospital.

Her involvement in Dance Marathon is part of the reason she wanted to work at the hospital, she said. Now, she sees some of the patients who were involved with Dance Marathon when she was a student, she said.

“I think just every year seeing the number of students who come and support it is just incredible and that it doesn’t change,” Petersen said. “Which is crazy, because we can be removed, you know, five years, and to see it growing even since then is just so cool.”