UI NiteRide and the UIHC emergency department saw more activity on Wednesday, but campus was quiet as temperatures stayed dangerously cold throughout the day. 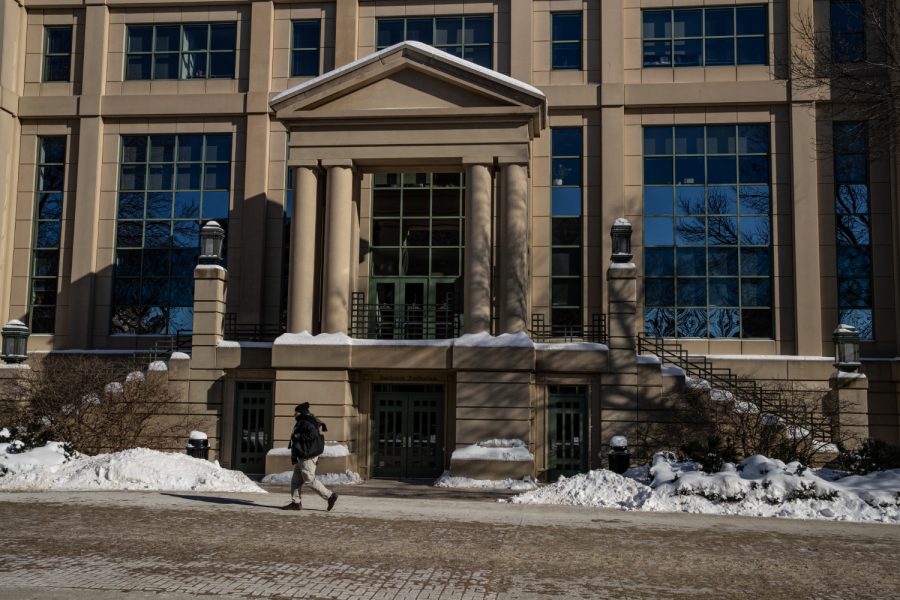 A lone pedestrian braves the cold on the T. Anne Cleary Walkway on Wednesday.

Under a cloudless sky, the University of Iowa campus was desolate, devoid of the thousands of students who would normally be crossing the Pentacrest at any given moment on a Wednesday afternoon.

Temperatures reached a high of minus-4 degrees and a low of minus-22 in Iowa City on Wednesday, with night wind chills reaching around minus-50. UI classes were canceled from Tuesday at 5 p.m. to Thursday at noon. Schools, universities, and businesses closed their doors throughout the Midwest, and the U.S. Postal Service suspended deliveries in several states, including parts of Iowa.

Back at the UI campus, NiteRide, a free night shuttle service for students, provided 80 rides over seven hours on Jan. 29 through the morning of Jan. 30 — four times the number of rides given on a typical January night.

RELATED: UI student dies overnight, cause of death believed to be weather related

“[Emergency Department employees] said that they feel that the actions that have been taken, including the cancelation of classes, offering options such as working from home, and suspending mail delivery, have all contributed to minimizing the potential impact of the extremely cold weather,” Moore said.

What is the polar vortex?

The extreme cold has been largely attributed to the polar vortex, the low-pressure region of the atmosphere surrounded by the rotating jet stream.

Former UI geography professor Pete Akers described the polar vortex as “a top spinning very quickly,” constrained over the North Pole. But, when this vortex weakens and the jet stream loses velocity, he said, it is as if the top is slowing down, wobbling. When this occurs every few years, the vortex can descend into mid-latitude regions, such as Iowa.

“For a historic cold wave like Iowa is [experiencing], a weak polar vortex isn’t enough,” Akers said in an email. “You also need several other weather factors to align, such as having a pool of cold air in Canada, a snowpack present on the ground, the focus of the cold invading air to be on Iowa, etc.”

Though this cold snap may lead some to challenge the phenomenon of global warming, Akers points out that there is research indicating that increasing global temperatures may lead to a weaker polar vortex.

And temperatures have reached well above average in 2019. Earlier this month, Iowa City saw temperatures above 50 degrees for a few days, and this weekend’s forecast includes highs above 40 degrees.