Assistant professor earns $2.1 million to continue research on the cerebellum

The National Institute of Mental Health awarded Krystal Parker a five-year, $2.1 million grant to continue her research on the cerebellum and its impact on diseases such as depression, schizophrenia, Parkinson’s, autism, and bipolar disorder. 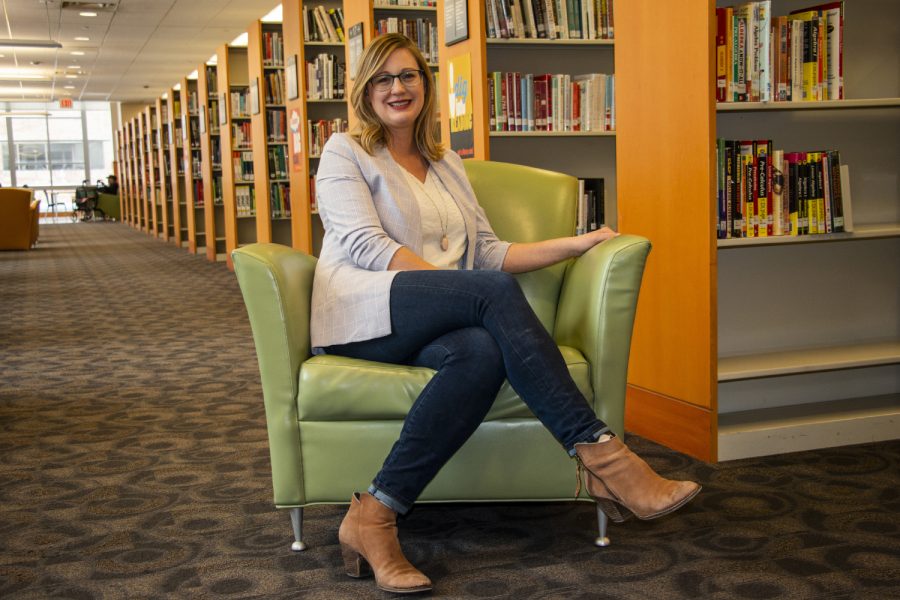 Krystal Parker poses for a portrait in the Iowa City Public Library on Friday, January 25 2019. Parker recently received a 2.1 million dollar grant for her research on the cerebellum.

The medical community has believed the job of the cerebellum, located in the base of the skull, was mostly for motor function. University of Iowa Assistant Professor of psychiatry Krystal Parker has spent the majority of her career refuting that belief, tackling various research projects related to the cerebellum’s role in cognitive function.

Parker has earned a five-year, $2.1 million grant from the National Institute of Mental Health to continue her research on the interaction between the frontal cortex and the cerebellum, she said.

Parker will investigate the role of the cerebellum in cognition and how cerebellar stimulation may influence cognition in various diseases such as schizophrenia, bipolar disorder, Parkinson’s, autism, depression and more. Her research is currently done on rodents, she said, but the goal is to take her findings and develop therapeutic treatments for the human brain in those suffering from mental illness.

“In general, the goal is to understand the basic mechanisms involved in abnormalities in the pathway between the cerebellum and the frontal cortex — but then also in how cerebellar stimulation can modify this pathway in a potentially therapeutic manner,” Parker said.

After graduating from Iowa State University with a Ph.D., Parker did a postdoctoral fellowship with UI psychiatry Professor Nancy Andreasen. She assisted Andreasen’s research, looking at how the cerebellum influenced schizophrenia, Parker said. Together, Parker and Andreason investigated connections between the cerebellum and the frontal cortex and observed abnormalities that contributed to schizophrenia.

Andreasen first noticed there was more to the cerebellum than motor function more than 20 years ago when she first began pet research, she said.

“At that time, there were only two or three of us in the world who believed there was much more to the cerebellum,” Andreasen said. “I think the important thing to emphasize is how novel [Parker’s] research is and how it’s almost revolutionary, because it turns thinking about the brain upside down. What we did here at Iowa was help Krystal move from being just an animal researcher into the human context.”

Coinciding with the research project, Parker has a clinical trial with pediatric neurologist and neurology Assistant Professor Aaron Boes.

“With the clinical team, I am associated with and the clinical team I’ve built with Aaron,” Parker said. “We are situated in a position to translate this to the patient population. We really tried to create a pathway for us to take the animal work we’re doing and quickly get it to the patients through these clinical trials. The potential for [the cerebellum] to be a novel therapeutic strategy is the ultimate reward.”

In addition, Parker developed and facilitates a cerebellar interest group consisting of about 30 UI researchers. The group meets and discusses how the cerebellum may be involved in various individual topics of interest, UI psychology Professor John Freeman said.

The cerebellar interest group could be groundbreaking for the UI, Andreasen said. There are only a few places in the U.S. with emphasis on studying the cerebellum.

“This is going to give us major national recognition as pathfinders and leaders in a new, novel area in cognitive research,” Andreasen said.