Breaking down the Iowa baseball roster

As baseball season approaches, it will be a different set of Hawkeyes at Banks Field in 2019. 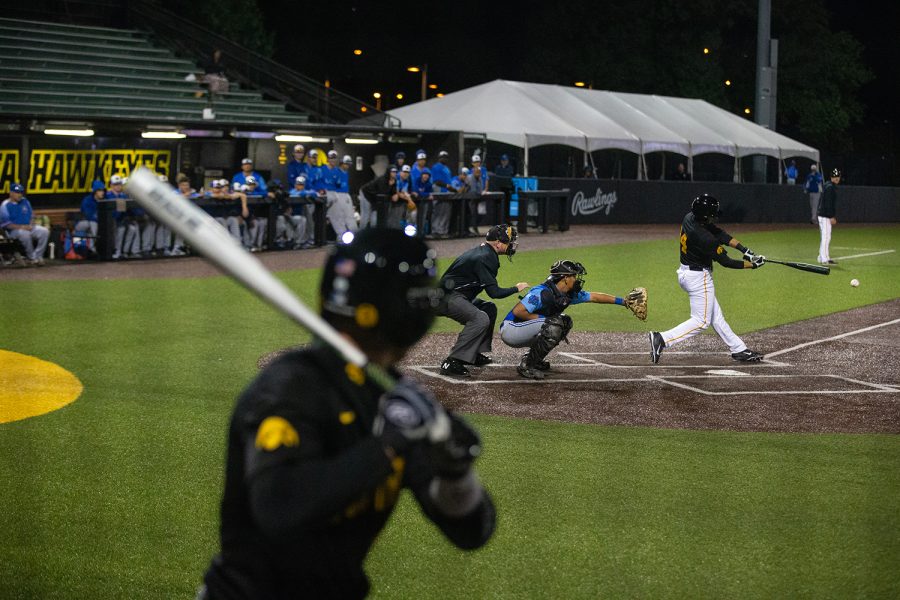 Wind chills cold enough to cancel classes don’t scream “baseball season,” yet the Hawkeye baseball team will kick off its season in just under two weeks.

How different? Here’s a look at each position group heading into the 2019 season.

Here’s where things get interesting.

Two of Iowa’s top three starters are gone, as are its two best relievers. Allgeyer and Daniels are especially tough to replace — they were the only Hawkeyes with ERAs under 3.00.

Make no mistake, Cole McDonald will play an important role in the Hawkeyes’ success this season. He finished 2018 with a 3.23 ERA and 52 strikeouts in 55.2 innings of work, and he will be called on as a leader. His .249 opponents’ average is slightly concerning, however.

Iowa’s success from a pitching perspective will also rely on Jack Dreyer. He posted a solid freshman campaign, finishing 5-2 with a 3.69 ERA and 42 punchouts in 31.2 innings.

The Hawkeyes are used to having an ace on the mound on Fridays with Allgeyer and Nick Gallagher leading the way in the past two seasons. It’s up to McDonald or Dreyer to keep that going.

Grant Judkins and Trenton Wallace will be two of the main candidates vying for the third spot on the weekend rotation.

While the departures of Daniels and Nelsen hurt Iowa’s bullpen, it returns a number of contributors, including Grant Leonard, Kyle Shimp, Derek Lieurance, Cam Baumann, Shane Ritter, and Ben Probst, along with a number of fresh faces.

Including catcher with the infielders, the infield is arguably the group with the biggest losses from last season.

Brett McCleary has the most experience, starting nine games last season with six at catcher and three at DH. He could use some improvement at the plate — he finished the season with a .172 average.

Matt Berst started three games behind the plate in 2018, closing the season with 9 plate appearances and a .222 average.

Austin Martin could also be a candidate to replace Cropley. While he doesn’t have Division-1 experience, the Altoona native hit .309 with 32 RBIs at Southeastern Community College and looked more than comfortable behind the plate and in the box in fall ball.

With Hoeg and Guzzo gone, first base could be a revolving door. Chris Whelan and Grant Judkins spent time there in the past, and the additions of Connor McCaffery, Zeb Adreon, and Tanner Padgett give Iowa some flexibility.

Iowa finds itself in a similar position at shortstop. Crowl was set to be one of the Hawkeyes’ top offensive returners, but now there’s an open slot. Tanner Wetrich started 20 games in 2018, but only one of them came at shortstop. Still, he spent time at the position throughout the fall season, allowing him to get more reps.

The Hawkeyes should be set at second and third base, with Mitchell Boe and Lorenzo Elion returning.

There are fewer questions here.

Neustrom’s absence won’t be easy to overcome, but the Hawkeyes have plenty of pieces.

McCaffery showed range in right field during the fall season and combined that with prowess at the plate. He could easily be inserted into the vacancy.

Justin Jenkins and Ben Norman are now juniors with plenty of experience patrolling the outfield, and Whelan will likely play a key role when he isn’t playing everywhere else.

Seniors Wetrich and Luke Farley are also likely to see time here and there as well.