Bohannon, Wieskamp searching for their shot

Jordan Bohannon and Joe Wieskamp struggled recently, but the Hawkeyes need their help to bounce back from two losses. 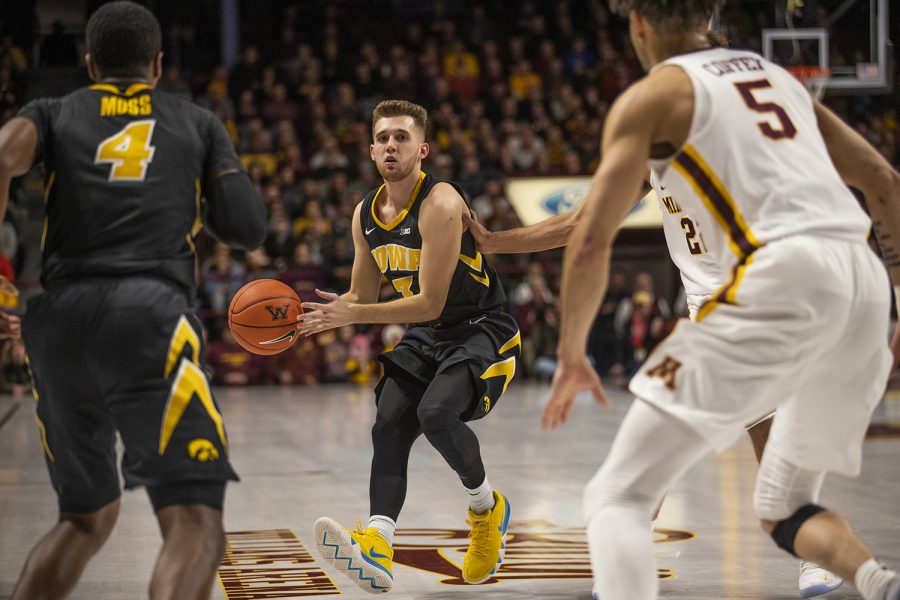 Iowa guard Jordan Bohannon readies a pass against Minnesota at Williams Arena on Sunday. The Gophers defeated the Hawkeyes, 92-87.

Jordan Bohannon and Joe Wieskamp are two of the Big Ten’s best shooters and two of Iowa’s most crucial playmakers.

Over the past two games, though, that hasn’t been the case.

Iowa has dropped two conference contests in a row, and in both defeats, to No. 6 Michigan State and Minnesota, the two have combined for 12 points. On top of that, they’ve shot a combined 4-for-18 from the field (22 percent).

Before the second half against Minnesota, Bohannon and Wieskamp combined for 8 points in three halves. The shooting numbers for the entire Minnesota game, however, dropped in comparison with the Michigan State game.

Bohannon made one of his three attempts, and Wieskamp did not make either of his two.

To the Hawkeyes’ credit, their post presence made up for the lack of production for the sharpshooters. Against Minnesota, Iowa scored 40 points in the paint — nearly half of its points.

Forwards Luka Garza and Tyler Cook scored 25 and 18 points, respectively, but head coach Fran McCaffery said he wants his team to do a better job combining both the inside and outside game, as well as working harder to free up the shooters.

“[Minnesota] just got up into their space,” McCaffery said. “They did a good job getting up into [Bohannon and Wieskamp]. We’ve got to do a better job screening if teams are going to play them that way. We really did a good job throwing the ball inside, but we’ve got to do a better job mixing that and getting those two guys open. We need them to take and make shots.”

RELATED: Defense nowhere to be found for Iowa basketball

Against the Spartans, the duo combined to make three of their 13 shots from the floor. The offense all-around, not just Bohannon and Wieskamp, went dry during Michigan State’s 24-2 run that effectively put the contest out of reach.

“We’ve got to settle down a little bit and get a really good shot,” Bohannon said after the loss to Michigan State. “Whether we’re down 8 at the time or down 12 at the time, we’ve got to make sure we work the ball and try to get the shot that we want.”

Both players can easily lead the charge offensively for Iowa, and they’ve showed that on numerous occasions this season.

Bohannon took over in Iowa’s 93-84 win over then-No. 24 Nebraska on Jan. 6, scoring 25 points and hitting five 3-pointers. He also scored 19 points against Penn State, hitting the game-icing shot from the parking lot.

Meanwhile, Wieskamp has scored at least 15 points on six occasions this season. He took over in the win against Northwestern, single-handedly keeping the Hawkeyes in the game. He also made all six of his 3-pointers against Illinois earlier this month en route to a 24-point performance, tying a career-high for points.

Point being, Iowa’s success, while coming frequently from the post, comes significantly from both Bohannon and Wieskamp.

Iowa is 9-0 when Bohannon scores at least 12 points, and the Hawkeyes are 6-0 when Wieskamp scores just as many.

With No. 5 Michigan heading to Carver for a Friday showdown, Iowa needs a boost from Bohannon and Wieskamp in order to turn around a two-game losing streak. The Wolverines boast the country’s third-best scoring defense, holding opponents to 56.5 points per game, and they keep opponents’ shooting to just 39.4 percent.