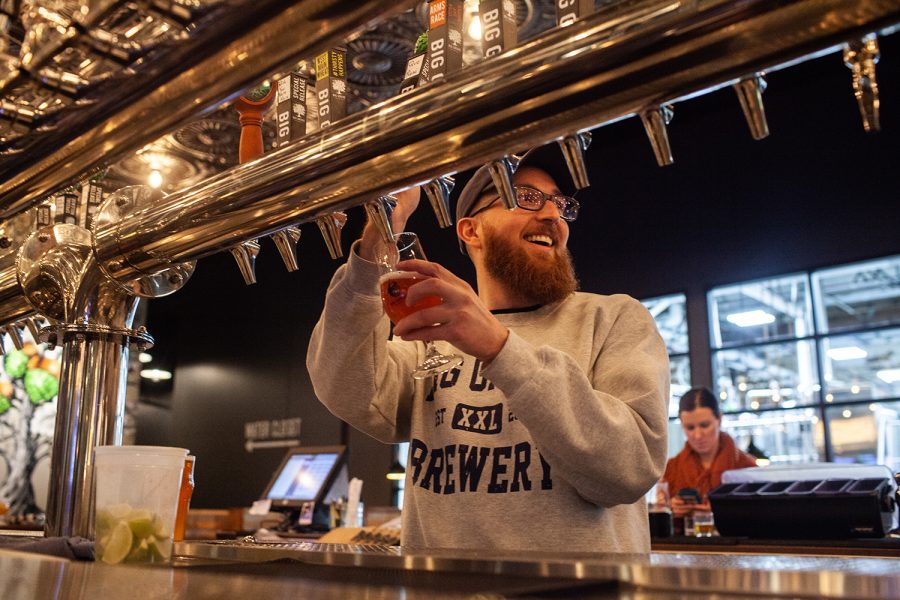 Zach Suiter pours a beer at Big Grove Brewery in Iowa City on Monday, January 28, 2019. Tailwind, a collaborative brew between Ragbrai and Big Grove, will be available in May.

Starting this summer, RAGBRAI will partner with Big Grove Brewery to present the first BIG ROVE bike ride and a new home-brewed official beer of the bicycle event.

According to RAGBRAI’s website, BIG ROVE is a one-day, 36-mile ride that cruises the Iowa River Corridor Trail and low-traffic roads with bike lanes. It will take place on June 29, 2019, with stops in Iowa City, Solon, and North Liberty.

The ride is part of the RAGBRAI Training Series, which hosts smaller rides leading up to the main event in July, RAGBRAI Director T.J. Juskiewicz said.

“The reason we dub it a training ride is because it tries to simulate what you do in RAGBRAI,” Juskiewicz said. “You ride long periods of time, and you stop a lot. We want people to get used to riding in a big group and show that it can really be enjoyable. It’s a safety course, but it’s also for fun.”

When RAGBRAI stopped at Big Grove in Solon in 2015, Juskiewicz and his team enjoyed the party put on by the brewery. He started thinking of ways to incorporate an event there regularly, he said.

In addition, RAGBRAI had been looking to expand a training route to eastern Iowa. With Big Grove’s atmosphere and the proximity to RAGBRAI’s partner, the Iowa Bicycle Coalition, this was a great opportunity for a new event, he said.

The Iowa Bicycle Coalition is committed to making cycling in Iowa as safe as possible. The group does this through youth programs and working with state legislators and the Department of Transportation, and it hosts numerous community teaching initiatives focused on safe cycling, coalition Executive Director Mark Wyatt said. Most funds raised from the RAGBRAI Training Series go to the coalition.

“Being able to bring more people into bicycling is a main part of our mission,” Wyatt said. “[RAGBRAI] has got a strong following, and it’s a good thing to have a partner like that to help get the word out.”

New this year to the RAGBRAI Training Series is an extra donation page at the end of registration, he said. After registering for the ride, cyclists can choose to donate to another organization or ask peers to sponsor their ride by donating to their cause of choice. The University of Iowa Stead Family Children’s Hospital is one charitable option, Wyatt said.

“We are really excited to work with the Children’s Hospital and get people to peddle for a purpose,” he said.

After collaborating on BIG ROVE, Big Grove CEO Matt Swift and cofounder Doug Goettsch pitched the idea of an official RAGBRAI beer to Juskiewicz, and from there, “Tailwind” was born, Goettsch said. It’s a golden ale that is light enough so bikers may drink four or five cans and continue to ride, he said.

As part of the two-year partnership, “Tailwind” will have unique packaging catered to the big event, and it will be available in all RAGBRAI towns.

“You’re always trying to align yourself with brands that share the same values,” Goettsch said. “We are about having good food, good beer, good fun, being outdoors, and being actives; that’s all RAGBRAI. We are very honored to be a part of it.”