UI professor Christopher Harris’ film work will be featured in a new book by Joel Schlemowitz. 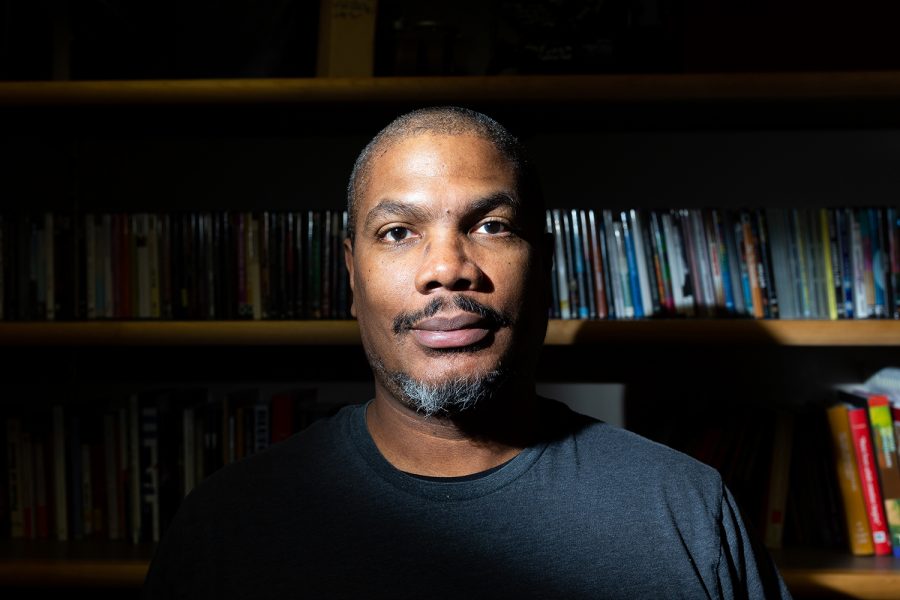 Associate Professor and Head of Film & Video Production, Christopher Harris, poses for a photo in his office on Thursday, Jan. 24, 2019.

One University of Iowa cinematography associate professor’s experimental work will be featured in a new book coming out later this year.

Christopher Harris is featured in the new book by Joel Schlemowitz, Experimental Filmmaking and the Motion Picture Camera: An Introductory Guide for Artists and Filmmakers. Harris — an experimental filmmaker, associate professor, and head of UI film and video production — will share pages of this book alongside some of the best experimental filmmakers in the world.

The book is scheduled to be released on May 31.

Steven Ungar, the UI Cinematic Arts Department interim department chair, said Harris’ films Halimuhfack and Reckless Eyeballing were among the films the department viewed before hiring him two years ago.

“I saw [Harris’ film] A Willing Suspension of Disbelief, which uses three-part images, voiceover, and subtext,” Ungar said. “This is a very exciting way to tell stories through pictures, and he does it in a way that struck us the moment we met him.”

Schlemowitz and Harris met at one of Harris’ solo art shows at the Microscope Gallery in Brooklyn, New York, in July 2016.

“I had previously seen one of his short films at a group screening the gallery had done some time in the previous year and was eager to see more of it,” Schlemowitz said in an email to The Daily Iowan.

But it wasn’t until January 2018 that Schlemowitz contacted Harris about the book Schlemowitz was writing.

“He wrote me, and we corresponded, and I sent him links to my work,” Harris said. “He asked me questions; I sent him some stills. Then, a year later, the book was announced. I had actually forgotten about it until a friend on Facebook, who is also in the book, posted a link to it, and it was then when I found out I was in it.”

The book focuses on experimentation and the camera, Schlemowitz said. The filmmakers whose work is featured as examples in the book all share an interest in using this fundamental tool of filmmaking — the camera —  as the source of inquiry or exploration.

Films by Harris that are featured in the book are: 28.IV.81 (Bedouin Spark), Sunshine State (Extended Forecast), and 28.IV.81 (Descending Figures). Harris’ films highlight such experimental film techniques as in-camera editing, the use of pinhole cinematography, and camera flares produced by raw light striking the 16-mm film.

Schlemowitz wrote in his description that the book explains the basic mechanism of the camera before going on to discuss slow and fast motion film, single-frame time lapse, the long take, camera movement, workings of the lens, and the use of in-camera effects such as double exposure.

“… and all of that’s right in my wheelhouse, because that’s the way I teach production courses, thinking about what the camera can do,” Harris said.

Schlemowitz and Harris find that the interesting parts about experimental filmmaking is being aware of the camera itself during the filming.

“It’s nice, and I’m happy that I’m featured in [the book], but I’m more happy that the book exists,” Harris said. “There aren’t a lot of books like this about experimental-film production targeted to working in analog.”

Harris teaches with only one experimental-filmmaking book, by Kathryn Ramey. Harris said he could foresee the UI department and other universities using both books to teach effectively.

When students see the book in the fall semester, Harris said, “Hopefully, I’ll seem more credible in [my students’] eyes.”