Rep. Eric Swalwell: ‘There is a path’ to the Democratic nomination

U.S. Rep. Eric Swalwell, a California Democrat who is eyeing a presidential run, made his pitch to Linn County Democrats on investing in education and a universal health-care plan. 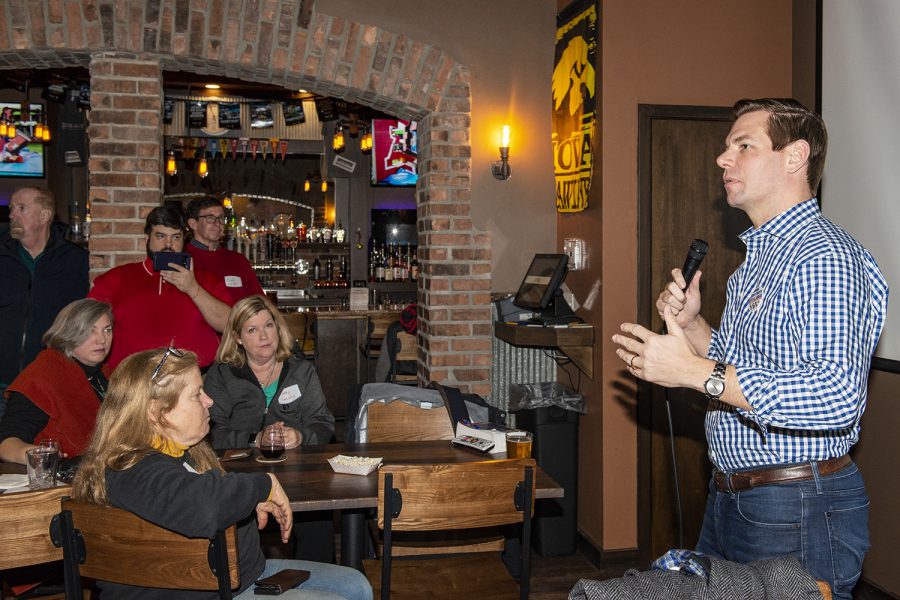 Rep. Eric Swalwell, D-Calif., speaks during a trip to Iowa at the Brick Alley Pub in Marion, Iowa on Sunday, Jan. 27, 2018. Rep. Swalwell is considering a bid for the 2020 Democratic Nomination for President.

Iowa will have seen two California Democrats eyeing the presidency by the end of this wintery week. U.S. Rep. Eric Swalwell met with Linn County Democrats on Sunday, a day before Sen. Kamala Harris will host a town hall in Des Moines.

Swalwell, who was born in Iowa, made several trips to the Hawkeye state during the 2018 midterms to campaign for Democratic congressional candidates. He hasn’t officially declared he’s running for higher office yet.

Swalwell, 38, said he’s close to making a decision on whether or not to seek the Democratic nomination for president. The four-term congressman made stops in South Carolina and will head to New Hampshire next week — both states that also vote early in the party nomination process.

“Can we win? There is a path. It’s not an easy path,” Swalwell said. “It’s a steep mountain to climb and I’m up for it. Right now, I have to talk with my family.”

Sunday in a Marion meet and greet hosted by Linn County Democrats in Brick Alley Pub and Sports Bar, Swalwell laid out a plan for investing in education, promoting gun safety, and enacting universal health care.

He also fielded questions from area voters and praised the new House Democratic majority — a victory from the 2018 election.

With the Iowa caucuses still more than a year away, most attendees The Daily Iowan spoke with said they wanted to hear from more candidates before they settled on a nominee.

Swalwell started his speech to a crowd of several dozen with a jab at President Trump, referencing the federal government’s 35-day shutdown. The standstill ended Jan. 25 with a deal to fund the government for another three weeks.

“This weekend it’s not something to celebrate, but it’s something that you made happen,” Swalwell said. “We saw the end of this Trump shutdown.”

In his remarks to the crowd, Swalwell said he supports a “health-care guarantee,” which he explained would guarantee all citizens health-care coverage commonly known as universal health care.

In order to pay for the program, he said he would look for ways to reduce spending in the defense budget.

“I’m always interested in hearing from any potential candidates for 2020 and in general people who come and hear what Iowans think,” Revaux said.

She said Swalwell told her he was in favor of repealing the Hyde amendment. The piece of legislation, enacted in 1976, bans the use of federal funds to be used for abortions.

State Sen. Rob Hogg, D-Cedar Rapids, who first met Swalwell in 2016, said he liked that Swalwell had enthusiasm and Iowa roots. Swalwell was born in Sac City, Iowa and lived there until he was in preschool.

Hogg added he thought Iowans would reserve their choice for the Democratic nomination until the last minute.

“I think it’s going to be very difficult for every candidate,” he said. “People are going to have to find new ways to win the caucuses. They’ve got to be innovative, they’ve got to be different.”

“While my dad put away criminals on the street, he was going to watch his son bring justice in the courtroom,” Swalwell said.

If Swalwell chooses to run, he will be throwing his hat in the ring with several other national Democrats who have already declared their intention to run.

Sen. Elizabeth Warren, D-Mass; former Housing and Urban Development Secretary Julián Castro; and Sen. Kirsten Gillibrand, D-N.Y. have all made their debuts in Iowa over the last month.

Sen. Kamala Harris, who campaigned in Iowa City ahead of the midterms will be making her first trip to the Hawkeye state after her 2020 announcement Monday, where she’ll host an invite-only town hall in Des Moines.

Sen. Bernie Sanders, I-Vt, is also expected to throw his hat in the ring in the coming weeks.

New York businessman Andrew Yang and Rep. John Delaney, D-Md, declared they would be seeking the Democratic nomination before 2018’s November elections and have made several stops in Iowa.