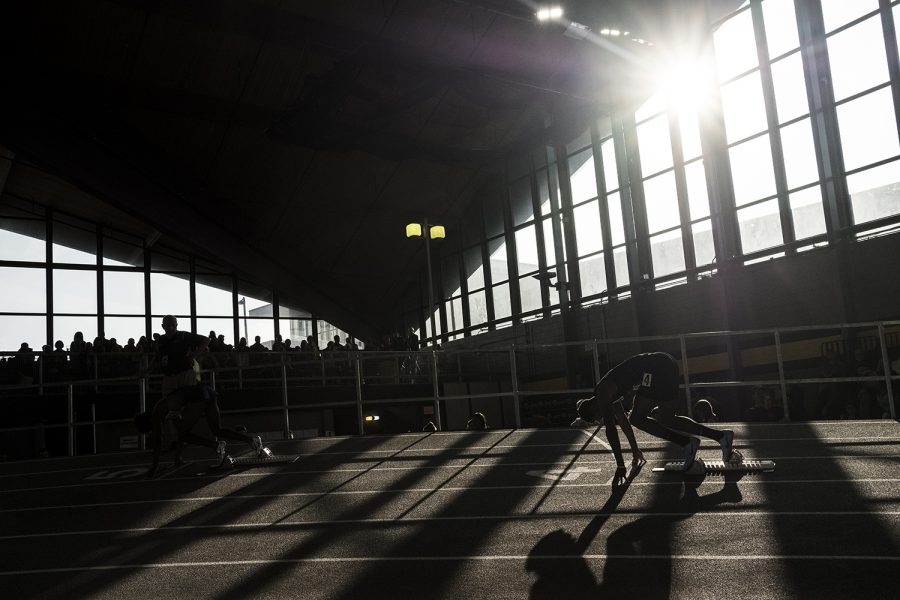 Athletes take their marks during the Larry Wieczorek Invitational on Saturday, Jan. 20, 2017.

The Iowa track and field team closed its indoor home schedule over the weekend with the Black & Gold Premier.

The male Hawkeyes came away with victories in two events.

Harris was happy to get the win, but he sees an opportunity to improve his performance.

“It always feels good to get a win,” he said. “Personally, I wish that I had ran a faster time, but you can never be upset with a win. Coach Wakenight told me I could have gotten off the blocks a little faster, but that’s just something we need to continue to work on.”

Iowa Director of Track and Field Joey Woody thought the men’s 400 meter was a highlight of the meet, and he was not surprised at all that Harris seeks a faster time.

“The biggest thing about Mar’Yea is that he has big expectations,” Woody said. “He expects to win every race he’s in when he steps out on the track. His ultimate goal is to be a national champion, and part of what makes that attainable is how competitive he is. Next week, I think he’ll build on this race, and he will be ready to put up a great time.”

Jaylan McConico also strode to a win, picking up his second-consecutive victory in the 60-meter hurdles (7.76).

“The win feels good,” McConico said. “I was feeling a little flat today, but it’s still good to come out on top. My time was pretty consistent with what I’ve been running all year, so I’m pretty happy with it.”

Hawkeye Chris Douglas finished second in the event (7.84). Anthony Williams would also put up a personal best in his preliminary heat (7.93).

Woody liked what he saw from the hurdle team, and he knows what he can expect from the runners the rest of the season.

“Jaylan had another great race today,” Woody said. “It was also good to see Chris Douglas back in that 7.80 low range. Those two right now have the two best times in the conference, and the exciting thing is that they can still improve some technical things and really put up some exceptional times.”

Iowa also put up a number of noteworthy times despite the absence of some key contributors.

Several athletes did not compete for Iowa so they could rest in preparation for the second half of the indoor season.

“We held a lot of our athletes out this week just because they have been training at such a high level, and obviously, last week was such a big meet for us,” Woody said. “We had to use this week to train and prepare for the finishing stretch of our indoor season. We start to get into our championship phase here in the next couple of weeks, so we had to use this week for a kind of preparation for those athletes.”