After struggling in the first meeting earlier this season, Iowa women's basketball got its revenge in a rematch against Purdue. 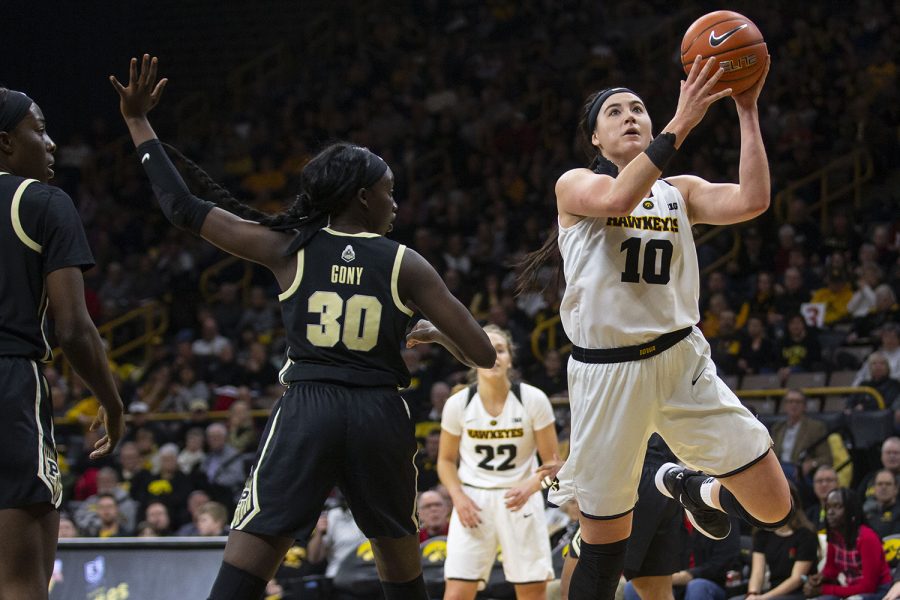 No. 17 Iowa women’s basketball (16-4, 7-2 Big Ten) only has two losses in conference play this season. The team had a chance to avenge one of them with a rematch against Purdue on Sunday.

The game took place in front of the biggest home crowd of the season for the Hawkeyes. It was a very physical contest on both sides of the ball, but Iowa prevailed by a score of 72-58.

The Hawkeyes may have won by 14, but it wasn’t easy.

Purdue was very physical throughout the game. Officiating allowed for very aggressive play from both teams, especially in the first half. The big Hawkeye crowd took notice.

“You really don’t have control over it,” head coach Lisa Bluder said. “[Some fouls] weren’t called tonight, so you have to move on and try and score in a different way. If you let it get to your head, if you think about it too much, you’re taking away from the focus.”

Center Megan Gustafson had an uncharacteristically quiet first half in a number of ways, largely because of this aggressiveness in the paint. Several Boilermakers – forward Ae’Rianna Harris and center Fatou Diagne – were on her case for much of the outing.

Purdue held Gustafson to shoot only 4-for-10 from the field in the first half. This is the same Gustafson who leads the nation in shooting percentage, so to see her at anything below 50% is certainly notable.

This was to be expected. Purdue was very aggressive in the last meeting between the two teams. Both of Iowa’s big players – Gustafson and Hannah Stewart – fouled out in the waning minutes of that contest.

Because Gustafson had a quieter game than usual, it was certainly a team win for Iowa. This was evident from the strong passing on the offensive side of the ball. The Hawkeyes only turned the ball over 8 times in the matchup, while also having 24 assists.

In the “down night” for Gustafson, Stewart really came out to play. She had 21 points and grabbed 7 boards, on a solid 60 percent from the field.

Stewart had a quiet offensive night in Iowa’s most recent contest against Rutgers, only putting up 4 points. This, she said, drove her in the big performance against Purdue.

“I wasn’t very happy with my offensive performance versus Rutgers,” Stewart said. “There were a couple times this week where I just got in the gym, cleared my head and just shot baskets. I just realized I’ve been thinking too much.”

Down at the half, Purdue came out of the break and attacked the paint in a similar way. They battled back to tie the game in the third and looked to have all the momentum.

Unfortunately for the Boilermakers, Gustafson came out swinging in the fourth. In the first 90 seconds of the fourth, she recorded a block, grabbed a rebound, and dropped 2 points.

Gustafson capped off a weird night at Carver with a monster block to seal up the win.

A team win for the Hawkeyes was rounded out with solid play on defense. The Hawkeyes blocked 5 shots, forced 13 turnovers, and held Purdue to a below-average offensive game.