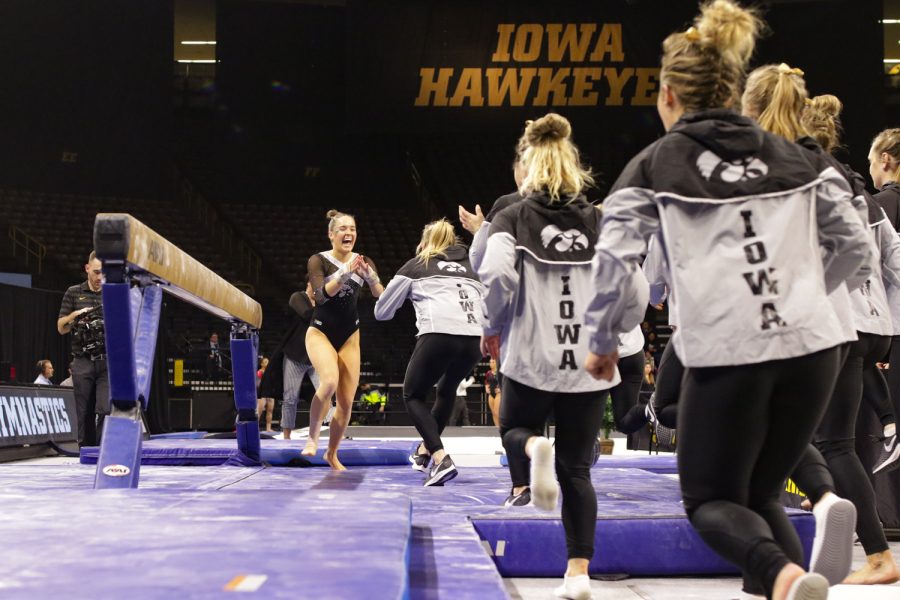 Iowa Gymnast Allie Gilchrist celebrates with her team during a gymnastics meet against Rutgers on Saturday, Jan. 26, 2019. The Hawkeyes defeated the Scarlet Knights 194.575 to 191.675.

After losing its first Big Ten meet to Minnesota, the victory over Rutgers gives the GymHawks — especially its young gymnasts — some momentum.

“We are just going to keep plugging away,” Iowa head coach Larissa Libby said. “The thing with this team is that anything you ask them to do, they’re going to do it. It’s never about how much they’re working or the effort they’re putting in. We have the right difficulty, we have the right people. We are just young and need a little bit more time.”

“I thought that, overall, we made a lot of improvements and adjustments to help us focus on each routine individually so we can move forward,” Killian said.

Her teammates’ support helped to set the atmosphere and motivate her to strive for success.

“We really have the best team, and I think it is really special to have all of them behind me,” Killian said. “They are the ones who make the best me; it is an amazing feeling to know that I have their support.”

Guerin saved her best performance for last when the GymHawks took to perform on the floor. She hit and stuck each part of her floor routine to give her a 9.875.

“It was so much fun with this team, and the atmosphere was amazing,” Guerin said. “I started off on vault and wanted to focus on that and not get ahead of myself, then I was just cheering on for bars and beam, then when it came time for floor, I was just focusing in on what was ahead of me.”

Once Guerin got on the floor, she was spot on, so it was a bit of shock that she actually changed up her routines before getting on the floor. Though no one could have guessed, she forgot a bit of her routine.

“I just changed my routine a little bit,” she said. “I moved it down to two passes, and I honestly forgot my dance there a little bit, but overall, it worked out well.”

Getting this victory means more to Iowa now as it prepares to hit the road to take on Ohio State in Columbus.

“Going into the rest of the season and Ohio State, it gives us a lot of confidence,” junior Clair Kaji said. “We got that first down that we always talk about. We take it one step at a time, and this is just another building block to where we want to be at the end of the season.”