Defense nowhere to be found for Iowa basketball

Iowa’s defense fell apart on the road, allowing Minnesota to shoot 57 percent from the floor in the Hawkeye loss. 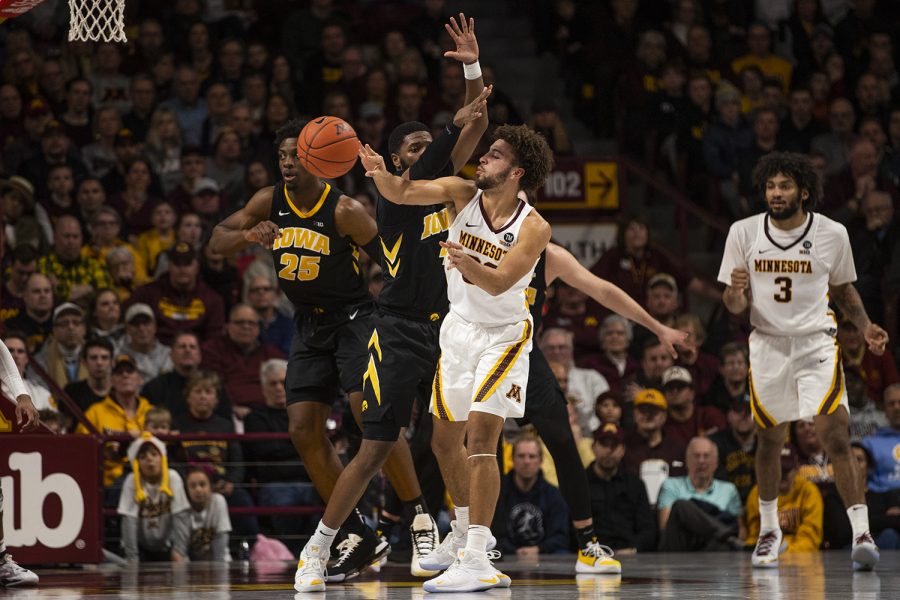 MINNEAPOLIS – At certain times this season, the Iowa basketball team has regressed back to its 2017-18 ways. Sunday was one of those times.

Defense, the Hawkeyes’ Achilles heel last season, was nowhere to be found in Minneapolis, as the Gophers out-shot the Black and Gold in a 92-87 victory.

“I just don’t think we were as locked in as we wanted to be coming off the tip,” Luka Garza said. “We weren’t able to keep the intensity up… overall, a poor execution on the defensive end.”

Right from the get-go, Minnesota shot the lights out of the ball, hitting seven of their first nine attempts off the tip.

The Gophers shot a red-hot 65 percent from the floor in the first half, jumping out to a 55-46 lead at halftime, and the sizzling streak continued into the second.

“The lesson here is to understand that we can’t start games this way,” Hawkeye forward Nicholas Baer said. “I think if you score 87 points, you expect to win any game of the year… we understand that the defensive end is what’s going to take us where we want to go.”

Baer said that during halftime, the Hawkeyes set their sights on playing with an emphasis on physicality, and while they cut the deficit late, Iowa still struggled defensively for the most part.

RELATED: Moss excels, but Hawkeyes fall short in battle at the Barn

Minnesota’s shooting dipped slightly in the second half, dropping to 45 percent – still, a better shooting percentage than the Gophers average per game.

The Gophers’ 93 points are the second-most points they’ve scored this season. Minnesota’s season-high total came against Omaha when it scored 104 points on Nov. 6.

Those 93 points were also the most Iowa’s allowed all season and the second time the Hawkeyes have given up 90 or more points in a game (first time was against Michigan State on Dec. 3).

Minnesota’s Jordan Murphy burned the Hawkeye defense all night long, scoring 23 points on 7-of-9 shooting. He grabbed 11 rebounds and dished out 6 assists as well, and he also blocked two shots.

“You’ve got to be together,” Iowa head coach Fran McCaffery said. “There’s got to be ball pressure, front the post, you’ve got to get over the weak side, then you’ve got to fight them on the glass… but if there’s one breakdown in any of that, as the possession goes on, they’re going to score.”

Iowa will have a few days to regroup defensively before its next game, but the opponent doesn’t get any easier.

No. 5 Michigan travels to Iowa City for a showdown with Iowa, and the Wolverines have shot nearly 46 percent in their 20 games this season.

“I don’t think you’ll find us moping around,” Tyler Cook said. “We lost a basketball game tonight to a good team, a team that we feel we could have beat, but that’s the game. We’ve just got to come back and be ready for whenever our next game is.”