Megan Gustafson scored the first 13 points of the game for the No. 17 Hawkeye women in their matchup against No. 14 Rutgers on Wednesday. 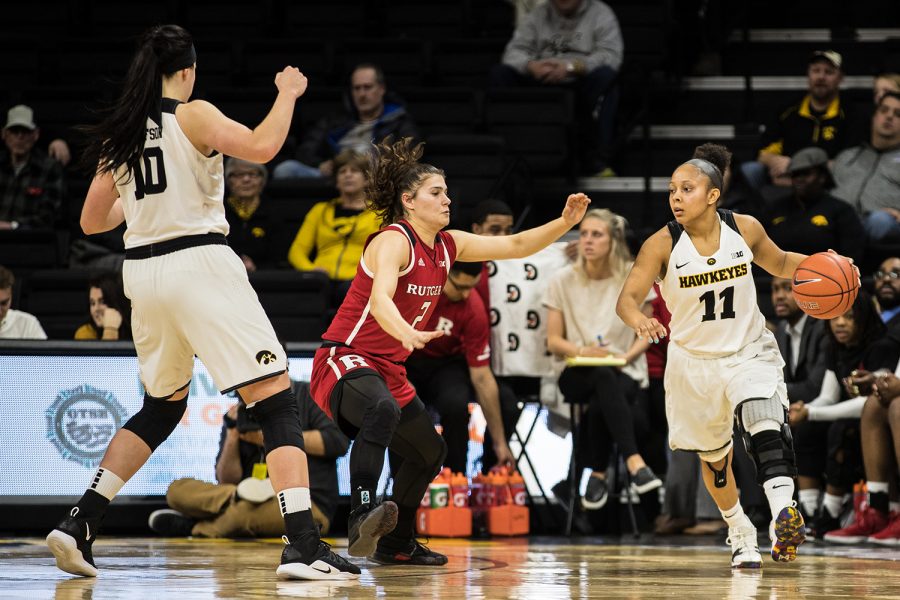 Iowa guard Tania Davis dribbles through the defense during a women's basketball matchup between Iowa and Rutgers at Carver-Hawkeye Arena on Wednesday, January 23, 2019. The Hawkeyes defeated the Scarlet Knights, 72-66.

The Hawkeyes proved themselves as one of the best teams in the conference, taking down the Big Ten-leading Scarlet Knights, 72-66.

The big game also served as a homecoming. Rutgers head coach C. Vivian Stringer, who was Iowa’s head coach for 12 years, was honored before the game for reaching 1,000 career wins (with 269 of them happening while at the helm at Iowa).

Stringer always coaches tough teams, and the Scarlet Knights are no exception. The Rutgers defense has been dominant this season, and it proved gritty in its matchup against Iowa on Wednesday.

Iowa struggled to get anything going in the first parts of the game, especially on the outside. Its lifeblood was solely the inside play of center Megan Gustafson, who scored her team’s first 13 points of the game.

Rutgers forward Stasha Carey gave Iowa fits on the defensive end and was also productive for her team offensively. She held Hannah Stewart, who is usually a high producer, to 0 points through the first half, and put up 10 points of her own leading into the break.

This is largely how the game continued until the second quarter. Guard Kathleen Doyle jump-started one of the largest home crowds of the year with a block. She got hot from beyond the arc and drained two 3-pointers to boost the shooting game.

Rutgers put itself into foul trouble early, and it became an evident problem as the game continued. The Scarlet Knights committed 26 fouls to only 12 from the Hawkeyes.

“When you play a team like that, when you are aggressive back and attack the basket, it’s really hard for them to keep you in front,” Doyle said. “Then that turns into fouls. We did a good job at really attacking the pressured defense.”

Iowa led for most of the second half, but Rutgers remained within striking distance

The Hawkeyes led by 3 points when Doyle took the free-throw line with only a few minutes left in the fourth quarter. Following a Rutgers defensive rebound, forward Tekia Mack converted a layup to make it a 1-point contest.

The sequence gave Rutgers a fighting chance. However, Stewart, who was uncharacteristically quiet in the contest, blocked a shot from the Scarlet Knights and helped secure a huge win for the Hawkeyes at the final score of 72-66.

“Our team worked really hard,” Iowa head coach Lisa Bluder said. “They stayed focused. They’re locked in. We took the lead in the second quarter and never gave it up after that point. That can wear on an opponent, when you can’t get that lead back again.”

It seemed like Gustafson would get close to scoring a million points in her dominant first minutes of the game. While she didn’t reach that mark, her stat-line was still impressive. She put up her 18th double-double of the season, putting up 32 points and grabbing 12 boards. She shot 13-for-16 in the outing.

“[Gustafson is] the best that I’ve seen,” Stringer said. “She’s truly the best center in the country, bar none. She can do anything on both ends of the floor, and we had no answer to her…They make pinpoint passes, she doesn’t drop the ball, she knows where to post up, and she can always hit those shots.”

Doyle, who had 17 points and 6 assists, had one of her biggest nights of the year. Her momentum, presence, and floor leadership gave the Hawkeyes the extra jump they needed.

To top of the win, Iowa’s 72 points is the most Rutgers has allowed all season.