The Hawkeyes put up solid offensive numbers in their win, despite Rutgers’ top-ranked defense. 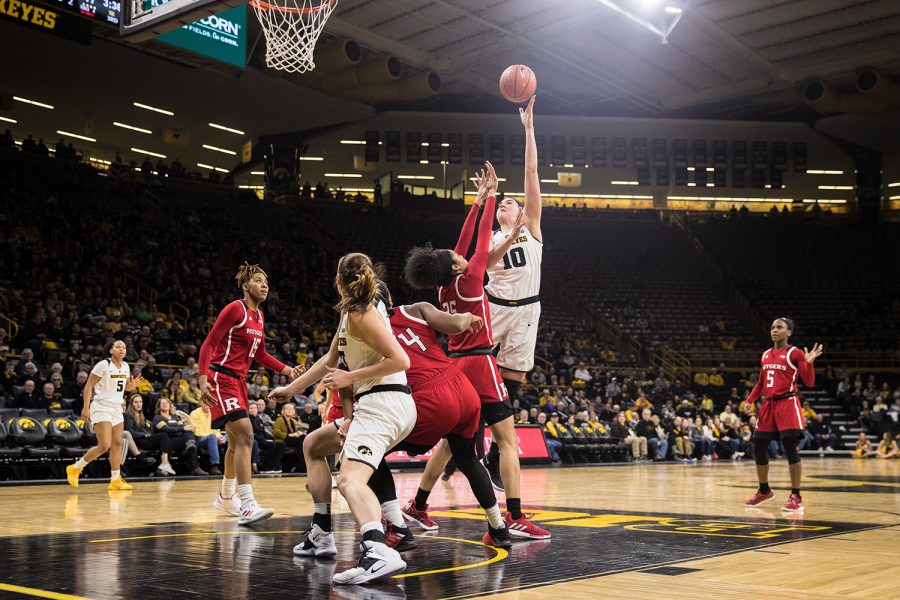 Iowa center Megan Gustafson lays the ball up during a women's basketball matchup between Iowa and Rutgers at Carver-Hawkeye Arena on Wednesday, January 23, 2019. The Hawkeyes defeated the Scarlet Knights, 72-66.

Iowa’s game against Rutgers was everything it was hyped to be. It was scrappy, Carver was loud, and neither team held more than an 8-point lead throughout.

The Hawkeyes’ answer to the Scarlet Knights’ vivacious defending? Get the ball to the national leader in both points per game and field goal percentage.

It was clear from the start that getting Megan Gustafson the ball was the top priority for the Hawkeyes, as she scored Iowa’s first 13 points despite the heavy focus on her. She finished with 32 points on 13-of-16 shooting and 12 rebounds.

“We had no answer for her. None,” Rutgers head coach C. Vivian Stringer said. “There’s not a whole lot of players in the country who require that amount of attention. And when you have to bring two or three, it makes it much easier for others to score.”

Gustafson’s big game came courtesy of stellar preparation from the Hawkeyes and a bit of misjudgment from the Knights.

Gustafson’s stellar inside game opened shots for other players on the outside, particularly Kathleen Doyle.

Doyle finished with 17 points on 5-of-11 shooting with 6 assists, 3 rebounds, and a block.

Gustafson and the Hawkeyes broke the Rutgers defense, scoring 72 points and shooting 50 percent from the floor. Both were the most the Knights have allowed to an opponent all season.

Another huge factor in Iowa’s offensive production was getting to the foul line. The Hawkeyes have been a solid free-throw shooting team all year and they knew Rutgers’ aggressive defensive styles would provide ample opportunity for free throws.

“When you play against such an aggressive team like that, if you are aggressive back to them, it’s hard to keep you in front and it turns into fouls,” Doyle said. “We did a good job of making sure we attacked that pressure defense.”

Aggressive play was a big part of the Hawkeye game plan, but so was ball control and a patient offense.

“Our guards controlled the ball really well,” head coach Lisa Bluder said. “We only had 12 turnovers against that pressure of a defense. We have 19 assists on 24 baskets. They played Iowa basketball; they didn’t let Rutgers get us out of what we wanted to do.”

Next, Iowa will take on Purdue Jan. 27 at Carver-Hawkeye at 2 p.m. Iowa lost to the Boilermakers, 62-57, earlier this season.