Hawkeye basketball gets opportunity at statement win against Michigan State

Iowa basketball could use a top-10 win on its résumé. Enter Michigan State. 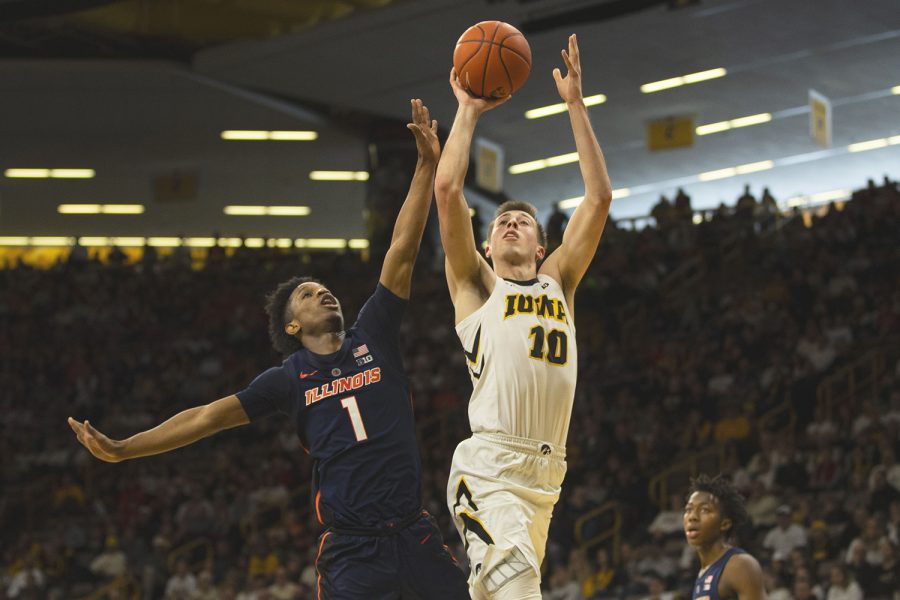 No. 19 Iowa basketball is trending up heading into the latter half of the schedule, but one thing is missing: a signature win over a top-10 opponent. Tonight, though, the Hawkeyes have the opportunity.

“We feel like we’re a top team in the Big Ten,” forward Joe Wieskamp said after Iowa’s win over Illinois on Sunday. “Obviously, we’ve got to prove that, we’ve got to beat them. It starts with Michigan State.”

The No. 6 Spartans will travel to Carver-Hawkeye for a 6 p.m. showdown today, and the Hawkeyes are hungry for revenge.

Thursday marks the second time for the two programs to meet this season; the first encounter finished in a 22-point Spartan victory. In that game, Michigan State forward Nick Ward made all 10 of his field-goal attempts and scored 26 points.

“A lot of it was in transition, and some of it was on the glass. Some of it was against the zone, again, against a smaller guy,” Iowa head coach Fran McCaffery said. “But 10-for-10 is still pretty impressive … if you’re jogging and you’re not ready, he’s going to kill you. It’s not complicated.”

Iowa has shown the ability to contain and, at some times, suffocate opposing bigs. The Hawkeyes held Ohio State’s Kaleb Wesson to just 2 points and Penn State’s Lamar Stevens to 8 during Iowa’s five-game winning streak.

Ward isn’t Michigan State’s only weapon, though. Spartan guard Cassius Winston averages 18 points per game, and forward Kenny Goins remains a menace on the boards, averaging more than 9 rebounds per game. For Hawkeye fans who have thrown the loss to Michigan State deep out of memory, Goins grabbed 14 rebounds.

The Spartans also thrive in the transition game, and that’s going to be the Hawkeyes’ top priority this evening.

“You know they’re going to run on makes or misses anyway, it’s just got to be an all-out sprint,” McCaffery said. “You can’t jog. You can’t back-pedal, you can’t run to your man. You’ve got to pick somebody up. You’ve got to stop the ball. You’ve got to fight the post.”

Both McCaffery and his players stressed how much they’ve developed since the 22-point loss in East Lansing. In the month and change since the loss, Iowa has won 10 of its 11 games and moved to fifth place in the conference.

But one of the biggest factors in tonight’s game is Carver-Hawkeye itself. The Athletics Department put out a “Storm Carver” promotion, giving away 1,000 free student tickets and offering free public parking in an effort to pack the arena and give the Hawkeyes an edge tonight.

Coincidentally, Iowa hasn’t toppled a top-10 team at home since taking down then-No. 1 Michigan State on Dec. 29, 2015. Now, more than three years later, Iowa will have another shot at a statement win — something the team needs on its résumé if it wants respect on the national level.

“Every time they come in here, it seems like a war,” forward Nicholas Baer said. “We understand it’s a battle when you play Michigan State. We’ll be ready for it.”