Brittany Brown and Aaron Mallett competed as professional athletes and posted some of the fastest times in the world at the Larry Wieczorek Invitational. 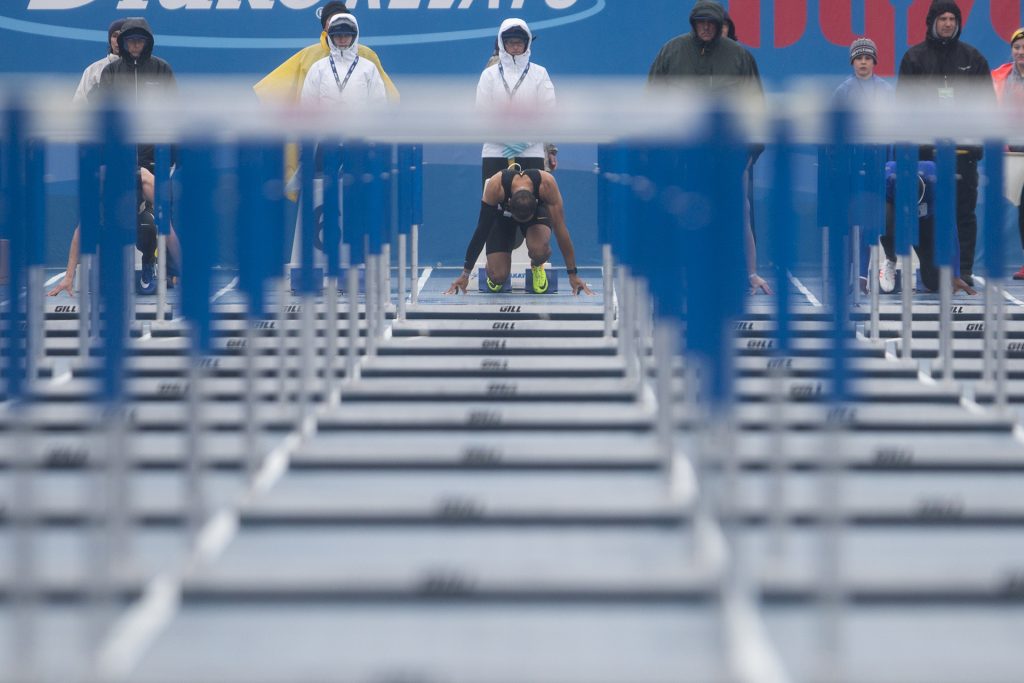 Iowa's Aaron Mallet waits on starting blocks during the 110-meter hurdles at Drake Stadium during the Drake Relays on Saturday, April 29, 2017. Mallet won with a time of, 13.47. (The Daily Iowan/Joseph Cress)

The Wieczorek Invitational took place in the Rec Building this past weekend and hosted some of the most talented teams in the country. However, what really elevated the meet was the presence of a variety of different professional athletes, including some former Hawkeyes.

Olympic-caliber performers took the track and ran along the college competition, and the results did not disappoint anyone.

“This meet is always such a fun event,” said Joey Woody, the Iowa director of track and field. “It is always fun to have the professional athletes here, they really take it to the next level. It adds to the great environment of the meet.”

Athletes sponsored by the likes of Adidas, Asics, and Nike were among those who competed.

Joining the other professionals were Brittany Brown and Aaron Mallett. Both former Iowa track stars made their way back to compete as part of their training for the Olympic Games.

Brown competed in the women’s 300-meters premier and ran a 36.30, the fastest time in the world in the event.

While her time at Iowa may be over, Brown will always be a Hawkeye at heart.

“It’s always great to be able to come back and compete here,” she said. “Right now, I am really focusing on my training, and getting to compete in an event like this is a great opportunity.”

Mallett came into the weekend as one of the highest-ranked track athletes in the world in the 60-meter hurdles. His performance backed up that ranking.

Mallett ran a 7.56 in the men’s 60-meter hurdles Olympic Deve.  That time is good for the second-fastest time in the world.

Record-setting times such as these are exactly what Woody had in mind when Iowa upgraded its track facilities three years ago.

“The University of Iowa purchased this world-class track surface after it hosted the 2016 IAAF World Indoor Track and Field Championships,” Woody said. “We did so with the intention of making Iowa City a destination for the best track and field athletes in the world.”

Since that purchase, Iowa has seen a rise in the number of professional athletes interested in competing here. The Wieczorek Invitational, only in its third year, has already been host to dozens of pros.

Woody seems to know the reason.

“People are excited right now about our program and our facilities,” he said. “Athletes — especially pros — know this is a place they can come to compete and put up some really good times. It’s really good exposure for our program.”

Brown and Mallett put up sensational performances as pros this year at the Wieczorek, and Woody hopes that is a trend that continues in the years to come.

“I would love to see more professional track athletes back here in the future,” he said. “We love having them here.”