Dangerous sculptures and the make-out rock of Brazil 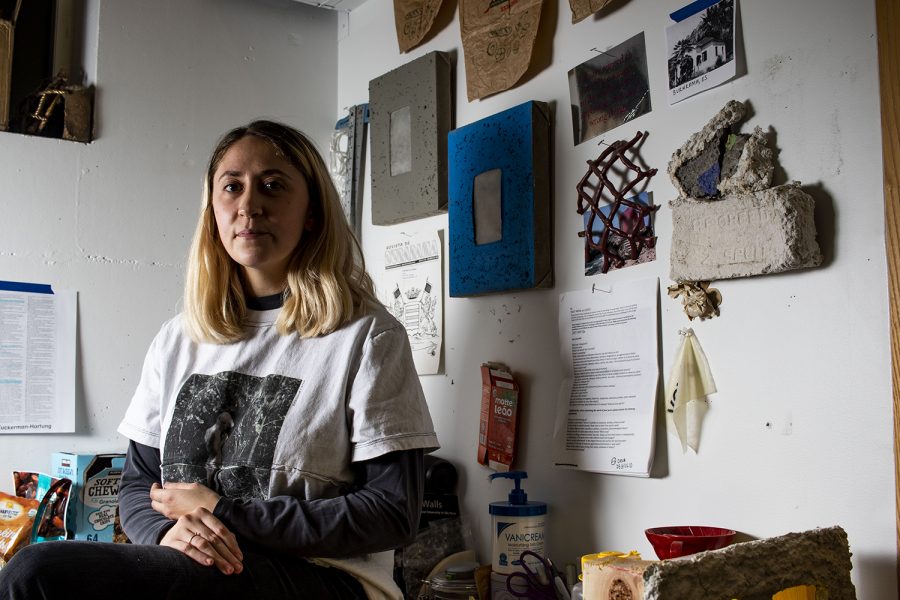 Kylie Gava covered an old TV stand in drawer liner and her family’s porch in crayon during her childhood. This graffiti from a young age soon became a lifetime in art and pushing boundaries.

Curiosities rooted in her potential eventually led her to explore deeper questions in her art, such as boundaries, family, and culture. From the Fire Department asking to remove one of her installations lined with razor wire to various shards of glass embedded in concrete frames, Gava is comfortable in pushing the boundaries in her art as a University of Iowa student.

This is Gava’s last semester before she graduates with a B.A. in sculpture and a minor in Portuguese. Her art has been featured in The Daily Palette and Studio Critical, and she was awarded the Stanley Award for International Research in Brazil.

“I went to Brazil for a little over four weeks,” she said. “My proposal was about this apartment building that my grandparents built. I learned a lot about security and visited welders who make grates indoors for homes.”

While Gava has been classically trained in drawing and painting, her time at the UI has shifted her work toward performative art and sculpture. Her past art has featured the security in boundaries. The material that she uses pushes those boundaries; Gava uses a lot of brick, concrete, glass, and razor wire. One of her installations has even gone on to be considered a building hazard to fire departments.

“I built a wall in front of the door so you couldn’t get into the the room,” Gava said. “It had razor blades on the top, and there was bread in the room, but the fire department happened to come the night it was installed and wrote me up.”

The fire department took pictures and looked at the installation for what the report states was 20 minutes.

“It’s funny, because what the fire department said was the problem was that it was blocking an egress — which was the point,” Gava said and laughed. “There wasn’t anyone in there, so it was silly.”

She said she took after her father, who was a graphic designer, and her mother, who was a social worker. A lot of her work focuses on her family’s background. Her time spent with the Stanley International Research award exemplifies that.

“I found, like, a lot of old pictures of the building and was looking at how the security of the building changed throughout time,” Gava said. “It was built in ’79, so not that old.”

She always went back to show a photo of her grandfather’s feet over wooden tile patterns. The photo looks like a complete accident, but Gava lights up about it.

Gava saw her grandfather’s goofy personality through a photo of his feet. It is this heartfelt energy and curiosity that pushes her through her current art project.

“I’m just thinking about immovable masses, identifiers, and history,” she said when asked about her upcoming installation.

The photo is pushing her toward what she’s working on, which as of right now are massive rock formations built with wire and paper.

“The last time I went back to the home village, there was this drama about this one rock,” Gava said. “There’s a make-out rock there that everyone says that their ancestors from Italy made out on that rock. People wanted to move it into the center of the town, and there were people who said no, absolutely not.”

Gava’s next show will be on Feb. 27 at the Visual Arts Building.